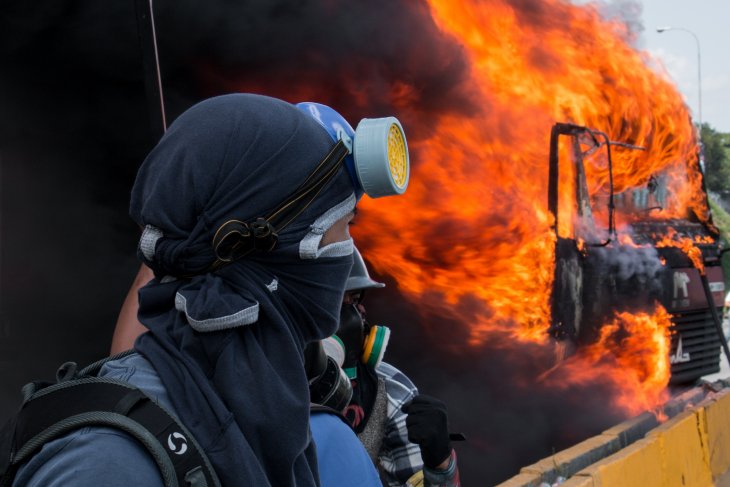 Food price fluctuations over the last decade and the corresponding unrest in several countries in Asia, Africa and the Middle East have led to a renewed interest in the link between food and unrest. A recent policy brief highlights some of the main findings in the field and suggests avenues for future research related to conceptual clarity of both food insecurity and unrest, the link between suggested theoretical mechanisms and empirical tests, and reversed causation.

During the latest food price spikes in 2007-2008 and 2010-2011 unrest occurred in several countries, where the reactions to the increasing prices ranged from peaceful demonstrations to widespread violence. These events have put the question of whether food insecurity is a driver of unrest at the forefront of the academic debate, and there is an emerging consensus in the literature that food prices increase the likelihood of unrest, especially in urban areas. Building on a substantial case-based literature, the literature has produced several strong and nuanced findings within the field. However, there are still unresolved issues and room for further conceptual and empirical clarity within the field.

First, there exists a wide range of suggested theoretical pathways of how food insecurity and unrest are linked. Although the explanations tend to have deprivation as a central part of the argument, the locus of the grievance varies as being related to the individual, the group or the state. However, even though the literature often presents different theoretical explanations of why unrest occurs due to food insecurity, contributions tend to proxy the variables in a similar way by investigating whether increasing food prices correlate with unrest. Thus, despite the many theories for how food insecurity is linked to unrest, we lack more precise measurement to tease out which factors are at play. There is often a gap between the suggested theoretical pathway and the empirics, where the proposed mechanisms diverge, but the empirical tests are akin. It would be a step forward for this type of analysis to, for example, explicitly model assumed conditional effects.

Second, there exists a wide range of indicators of food insecurity, and the measures are often indirect and proxy based (such as food price fluctuations, weather-affected agricultural output, child stunting and malnutrition, and state imports as a share GDP). Due to the complicated phenomenon and wide range of potentially relevant aspects, it can be difficult to capture in measurement. The theoretical definition of food insecurity and how it is captured in measurement should be made explicit to be better able to compare results between studies. Also, this heterogeneity in data does not only relate to the independent variable, but also the dependent variable, as the literature includes a variety of outcomes due to food insecurity, such as demonstrations, riots, protests and civil war. Contributions within the literature often focus on riots as the dependent variable, and tend to identify and label these events as ‘food riots’. However, that rioting is the most likely response and what food-related unrest includes can be challenging to identify, and the extent to which food was the most central reason behind the reaction by the public is often unclear. A possible solution is to not discriminate between the different types of reactions by the population, where it is the total number of events that are included as the dependent variable (and not the number of food riot reports), or focus on a more narrowly defined type of unrest based on theoretical expectations.

Third, there are also methodological challenges within the field of food insecurity and unrest. Issues related to factors such as reversed causation and omitted variable bias are not unique for the literature, but may be especially pressing given that armed conflict is an important driver of increased food insecurity in affected communities. The endogenous relationship between food insecurity and unrest is likely to provide skewed results, and underscores the importance to handle these issues. The use of experimental, natural and quasi-experimental designs to draw causal inference can be a step forward for this type of analysis.

The research on this topic is vast, ranging from contributions focusing on England and France in the early eighteenth century to recent events during the food price shocks in the 2000s. Future research would further advance the field by going beyond the correlation between food prices and unrest, and empirically incorporate the assumed mechanisms and conditional effects. Although easier said than done, the challenges within the literature identified here could hopefully provide some pointers on the potential way forward.

You can read the policy brief in its full length here. The policy brief is based on the article “Food insecurity and domestic instability: A review of the literature”, forthcoming in Terrorism and Political Violence.