The Intergovernmental Panel on Climate Change (IPCC) is headed towards another round of assessing the world’s climate and how it affects our lives and livelihoods. Last September, the outline of the Sixth Assessment Report was approved and now the selection of authors is underway.

‘Climate change is fuelling wars across the world’. Thus, a heading in The Independent summarized the views of UN Secretary General António Guterres in January 2017, shortly after he took office. The potential implications of climate change for conflict remain high on the international political agenda. The reports of the IPCC are broadly recognized as the most authoritative summaries of what we know and what we do not know about the effects of climate change. Yet, there is little scientific evidence in these reports for the view that climate change is an important driver of conflict.

The Fifth Assessment Report (AR5) of the IPCC, published in 2014, included for the first time a separate chapter on Human Security, which also contained four pages on conflict. This section assessed that ‘collectively the research does not conclude that there is a strong positive relationship between warming and armed conflict’ and that ‘there is high scientific agreement that … increased rivalry [between countries over shared resources] is unlikely to lead directly to warfare between states’ (p. 772). The authors nevertheless argued that climate change is likely to have an influence on some known drivers of conflict and inferred from this that climate change might still stimulate conflict, ignoring the problem that correlations are not transitive.

A chapter devoted to the robustness of the report’s findings (Detection and attribution of observed impacts), dismissed the climate-change-to-violence link entirely. This was in part because the findings relating climate change to conflict were contested, but also because most such analyses have ignored the potential for adaptation and have focused on interannual variability rather than on climate change. Overall, Ragnhild Nordås and I concluded, in an article in Political Geography, that AR5 did not ‘support the view that climate change is an important threat to the long-term waning of war’. All of this did not, of course, prevent some media from presenting the AR5 report as concluding that ‘Climate change will lead to war, famine and extreme weather’. 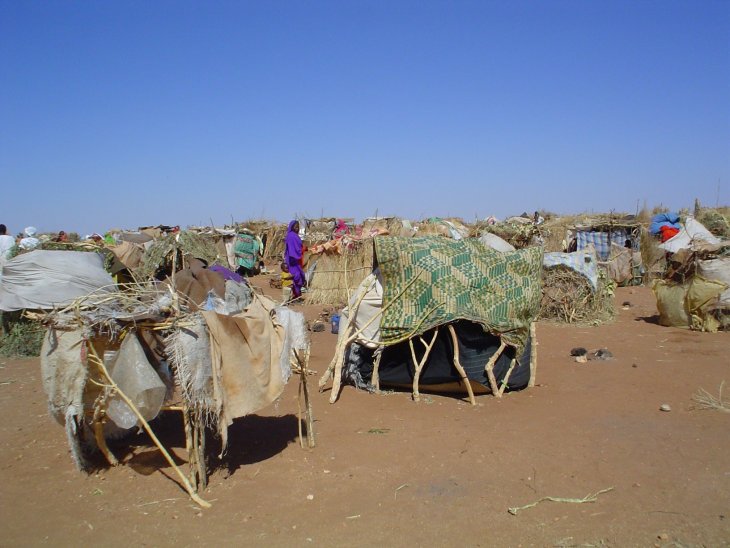 IDP camp in Nyala, South Darfur. The conflict in Darfur has been attributed to climate change, but the Fifth Assessment Report of the IPCC states that ‘All studies of this conflict agree that it is not possible to isolate any … specific causes as being most influential’ and that ‘[m]ost authors identify government practices as being far more influential drivers than climate variability’ (IPCC 2014, WGII, Ch 12, p. 773). PHOTO: USAID

The IPCC has now started the process toward a Sixth Assessment Report (AR6), scheduled for release in 2021–22. The outlines for the reports from the three Working Groups were released in September last year. Working Group II, Impacts, Adaptation, and Vulnerability, is the one that concerns us here. This report is down to 18 chapters, compared with 29 in AR5. The Human Security chapter is gone. The term occurs now only in a single bullet point in Chapter 8 (Poverty, livelihoods and sustainable development): ‘Opportunities for development including adaptation with mitigation co-benefits and tradeoffs, economic diversification, equity, human security, coping with loss, residual risk, and sustainable development’. The only other references to ‘security’ are ‘water security’ in Chapter 4 (Water) and ‘food and nutrition security’ in Chapter 5 (Food, fibre, and other ecosystem products). ‘Conflict’ occurs only once in the 2000-word outline, and then in the context of competition for the use of land and ocean, including conflicts with indigenous rights.

Drawing conclusions about the implications of climate change for social phenomena such as conflict is subject to so many uncertainties that it might be better just to conclude that the main risk is uncertainty itself.

Had the IPCC learned from its previous reports that the links between climate change and conflict were so tenuous that there was little basis for including it among the important hazards, the downgrading of conflict in the forthcoming AR6 might be good news. Drawing conclusions about the implications of climate change for social phenomena such as conflict is subject to so many uncertainties that it might be better just to conclude that the main risk is uncertainty itself.

Yet it is probably premature to celebrate appropriate caution on the part of IPCC. In AR5, as well as in the two preceding assessment reports, comments on climate change and conflict, sometimes formulated in dramatic terms, were scattered throughout other chapters, notably in the Africa chapter. From this perspective, the more extended treatment of conflict in the AR5’s Human Security chapter was a sign of progress, despite its limitations; the topic was taken more seriously and the treatment was more balanced. With the Human Security chapter dropped from the next assessment report, the IPCC could be reverting to short asides that contribute little substance but merely fuel more speculation about effects of climate change.

One of the complaints about AR5’s Human Security chapter was that its team of Lead Authors and Contributing Authors was largely composed of scholars who had published mostly on broader aspects of human security but little on conflict – although additional expertise was consulted at the review stage. Ragnhild Nordås and I therefore concluded that it ‘probably would have been worthwhile to seek to broaden the writing group’.

Given the experience with previous IPCC chapters on Africa, Water, and Food etc., one cannot feel very confident that the new author teams will include conflict experts. However, several conflict scholars have self-nominated in countries where this was possible, and the Norwegian Environment Agency has nominated myself as well as two PRIO colleagues among the 84 candidates from Norway. It remains to be seen whether the IPCC Bureau will include any of us in the final selection of authors, to be announced in February.

This is a very interesting and timely blog post that stimulates a couple of observations and comments.
First, I too have wondered why the AR6 report is not going to revisit the human security chapter/focus. I’d like to know more about why this is the case. Is it really what NPG is suggesting above, that the AR5 report found no convincing evidence of climate change-conflict linkages so the focus on violent conflict was dropped? It seems that NPG’s conclusion that the AR5 report found “the links between climate change and conflict were so tenuous that there was little basis for including it among the important hazards” – that this observation (leaving aside his contentious claim that the effort should be measured on its ability to find “important” hazard links) could just as easily have led some to suggest that the debate is still open on the “importance” of climate change and conflict linkages, justifying another round of examination of the research in AR6. Why didn’t this happen? Is there any evidence of NPG’s suggestion that findings of contention among experts on the linkages in AR5 led to dismissing the relevance of looking at climate conflict linkages, so it wasn’t included in scoping for the next report? I would like to hear more about this.
Second, I wanted to point to the upcoming IPCC Special Report on Global Warming of 1.5°C, which is currently in the expert review stage. Chapter 3 of that report discusses impacts, including impacts on various drivers of instability like poverty, livelihood changes, migration, etc. There’s one paragraph on conflict which basically concludes that expert opinion is still divided about the links between climate change and conflict. This seems to be a balanced conclusion about the state of current research, and seems to suggest that NPG’s skeptical take on the research findings in AR5 are not conclusive, but perhaps only highlight his view of what’s most convincing in current research. IPCC reports don’t settle questions, they report on the state of knowledge among experts. So, it seems that the research community on environment/climate change-conflict needs to double its efforts to try to overcome the inconsistent results in recent research and try to find consensus going forward.