According to the World Food Program’s (WFP) latest report, the COVID-19 pandemic will lead to an 82 percent increase in global food insecurity, affecting around 270 million people by the end of the year. On June 29, the organization announced it is undertaking its largest humanitarian effort to assist an increasing number of food-insecure low- and middle-income countries. In a statement about the plan, WFP Executive Director David Beasley said that “until the day we have a medical vaccine, food is the best vaccine against chaos. Without it, we could see increased social unrest and protests, a rise in migration, deepening conflict, and widespread under-nutrition among populations that were previously immune from hunger.”

Why is the pandemic leading to more food insecurity? And why is David Beasley talking about social unrest and protest in connection with food? 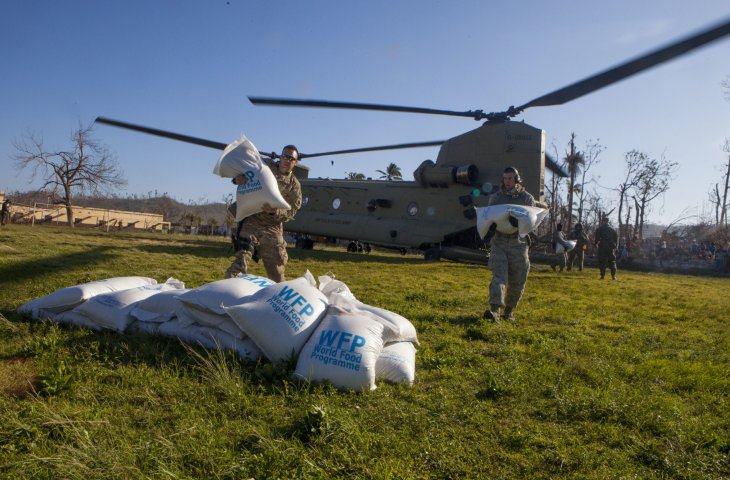 Disaster relief in Haiti due to Hurricane Matthew. Photo courtesy of The 621st Contingency Response Wing.

As COVID-19 spreads around the world, fears are mounting of how the pandemic might impact and disrupt food distribution channels (e.g., transport disruptions) and disruption in the production of staple foods (e.g., labor shortages due to quarantine measures).

So far, food supply chains have been defined as essential by governments, exempting them from most lockdown measures. Thus, the impact on supply chains has been indirect, mainly caused by reduced income and remittances. A loss of income makes it harder for poor people to access affordable food but also impacts food systems by making it more difficult for producers to sell foodstuffs, since consumer’s ability to buy food declines. Governments, especially in low- and middle-income countries, will therefore have to implement policies that avoid supply chain disruptions and higher food prices.

But what do food insecurity and food prices have to do with protest and violence? The answer: it’s complicated.

The pandemic is spreading at a time when the number of severely food insecure people in the world had already increased—by more than 820 million people before the pandemic started—adding stress to areas already hardly hit by extreme weather events, armed conflict, and low economic development. However, most of these areas have not seen widespread unrest.

Given the widespread phenomenon of food insecurity and volatile food prices, when might we expect to see unrest as a consequence? A look at academic literature provides some clues:

Interestingly, although food insecurity can spark protest, it may actually hinder active political participation among the worst affected. In other words, it is often not the most hungry or food insecure who engage in protest, but rather segments in society who are relatively better off, for example, the urban middle class who have the means and energy to protest.

What should be done to avoid increased food insecurity and the potential burden of social unrest?

One of the most important things to avoid are export restrictions, which states can use in an attempt to protect domestic supplies. Such protectionism may seem like a good policy to protect food insecure segments domestically, but if many governments follow suit it can result in a global food price shock, which happened in 2007-08 and 2010-11. Widespread unrest followed in several countries in Africa, Asia, and the Middle East. Rather, states should focus on measures that help maintain access to food and keep the food supply chain open, make use of cash transfers and food banks, and support robust social safety nets and food assistance programs.

More generally, governments should strive to reform and implement more effective food subsidy schemes that better target the poor. However, as Cullen Hendrix and Stephan Haggard have argued, governments, especially in developing countries, face a trade-off when they strive to obtain two different versions of food security at the same time: food security as human security, and food security as a way to ensure regime stability and quell urban unrest. Less stable regimes must focus on avoiding increased food insecurity and food prices domestically, both to prevent undernourishment caused by the pandemic, but also to avoid the potential of social unrest.