Five years after the European migration and refugee crisis, displacement remains a pressing issue worldwide. According to the UNHCR, the global number of forcibly displaced people passed 80 million during 2020 – the highest estimate ever recorded. Several factors have contributed to this increase, including a rise in political violence and instability, extreme weather events, and – most recently – knock-on effects of the COVID-19 pandemic. With adverse impacts of climate change increasingly unfolding in real-time, concerns are mounting that the world will see a dramatic increase in migration in coming decades. 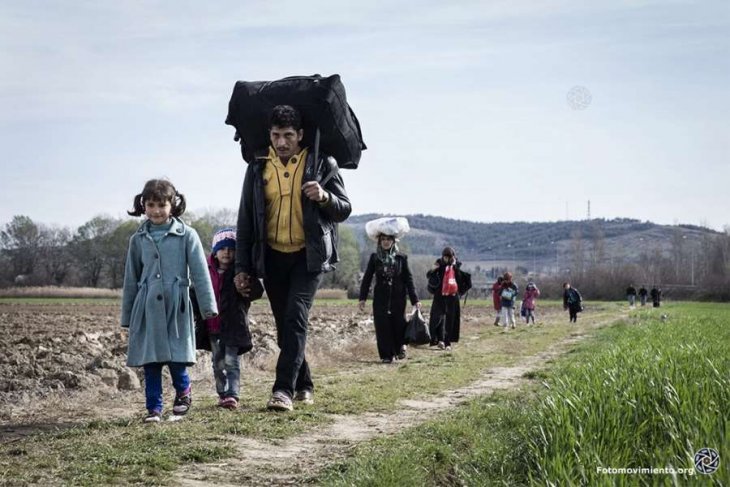 Calculating the number of individuals who will relocate at least partly due to climate change is inherently challenging. Migration typically has multiple causes and it is generally difficult to determine causality. Moreover, the effects of climate change not only may provide a motivation for migration: these effects can, at the same time, reduce vulnerable people’s ability to move.

But how important is climate in shaping forced displacement today? The scientific literature does not provide a satisfactory answer to this question. Part of the reason is that conventional methods for statistical analysis are unsuited for handling the complex and mutually reinforcing nature of theorized push factors. This knowledge gap is unfortunate as it obstructs effective political management of the drivers of displacement and, further, invites speculation about the true underlying motivations for migration.

In a new study just published in the journal Nature Communications, we seek to address this lacuna for one particular form of contemporary migration: asylum migration to the European Union. Unlike migration for employment and family reasons, for instance, which is tightly controlled by policy, asylum migration primarily reflects the agency of people who feel compelled to move. It is a form of migration that might respond relatively quickly to increased hardship in countries of origin.

In Europe, roughly every second asylum seeker’s claim is rejected. This fact reflects the restrictive policy environment and the unpredictability of the asylum system. But it also suggests that asylum migration might respond to drivers beyond those that trigger a right to international protection. Moreover, extreme weather such as droughts and heatwaves can aggravate precarious living conditions in conflict-affected societies and thus inform decisions about whether and when to flee.

While some scholars urge for caution in linking climate change to forced migration, others argue that global warming may triple the volume of asylum migration to Europe within this century, assuming other drivers remain constant. The need for scientific evidence that can place the climate effect in context is obvious. Hence, drawing on state-of-the-art machine-learning tools, we systematically evaluate which factors in each country of origin best predict the number of near-future arrivals of asylum seekers from that country to the EU-28. First, we compare three thematic clusters of indicators capturing violence and oppression, economic conditions, and climatic conditions, respectively. We let the three compete against each other, so to speak, in order to see which of the three sets of drivers offers the most accurate prediction of actual flows.

Unsurprisingly, the analysis reveals that levels of violence and insecurity are superior predictors of departure of asylum seekers to the EU, and especially so during the migration crisis of 2015–16. This is evident in the figure below, which shows the share of the yearly asylum migration flow best predicted by each of the three drivers. We also find that economic and, to a lesser extent, climatic conditions add some predictive power, primarily in cases outside armed conflict. The increasing prominence of economic predictors in recent years reflects the deteriorating situation of the Venezuelan refugee and migrant crisis. 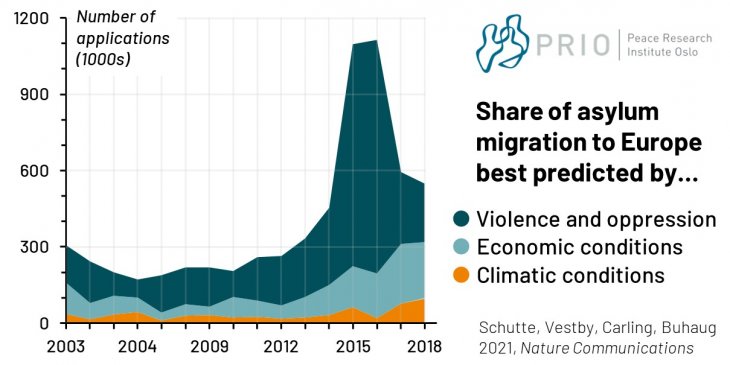 Share of annual number of first-time asylum seekers to the EU best predicted by each of three thematic sets of indicators.

In a subsequent test, we evaluate the predictive importance of individual indicators within the three clusters. We find that the severity of armed conflict, measured as the annual number of battle-related deaths, is a powerful predictor, especially for conflicts that exceed around 500 deaths per year. Likewise, restrictions on civil liberties strongly predict the number of asylum cases whereas homicide rates matter relatively less. Among the economic indicators, level of development (GDP per capita) predicts average levels of asylum migration well but is less effective in predicting short-time fluctuations in applications. None of the climate-related indicators are good predictors of asylum migration.

It is unsurprising that the best predictors of asylum migration to Europe are violence and oppression. But in light of previous research and popular debate, this fact is important to establish. Climate change is an overwhelming global challenge, but for other reasons than a prospect of a surge in asylum migration to Europe. At the same time, the asylum seekers that arrive constitute a constant reminder of the need to address widespread violence and oppression in countries of origin.

The article underlying this blog post is open access and can be downloaded from here. This research has been supported by the European Research Council through grant no. 648291.

The impacts of climate change are numerous and may both trigger displacement and worsen living conditions or hamper return for those who have already been displaced. Limited natural resources, such as drinking water, are becoming even scarcer in many parts of the world that host refugees.

Migration is a form of adaption to environmental/climate changes. It is only When politicized, that it becomes a problem , fueling tension and posing potential peace and security threat