One of the consequences of war is disrupted food provision. The connection between conflict and hunger is indisputable when we look at today’s locations of the major global hunger emergencies: Rakhine in Myanmar, the Kasai Region in DR Congo, north-eastern Nigeria, South Sudan, Syria and Yemen. It is estimated that 80 percent of the World Food Programme’s (WFP) resources are deployed in conflict-affected areas. But what about the opposite relationship: does hunger cause violent conflicts? 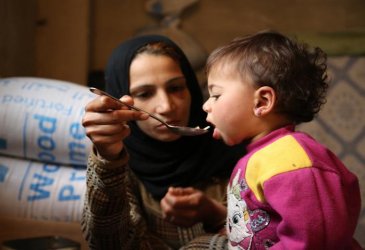 The many protests after global food prices rose sharply in 2008, and the outbreak of the Arab Spring uprisings in the aftermath of a second peak in food prices at the beginning of 2011, are often cited as evidence that many of today’s conflicts are fundamentally about scarcities of resources and food shortages. A common assumption is that reduced food security leads to hunger and desperation, which in turn trigger protests, violence, and increased risks of radicalization. The growing concerns about the social consequences of climate change are helping boost this view of the world.

It is perhaps surprising, then, that there is little scholarly merit in the notion that a short-term reduction in access to food increases the probability that conflict will break out. This is because to start or participate in violent conflict requires people to have both the means and the will. Most people on the brink of starvation are not in the position to resort to violence, whether against the government or other social groups. In fact, the urban middle classes tend to be the most likely to protest against rises in food prices, since they often have the best opportunities, the most energy, and the best skills to coordinate and participate in protests.

Accordingly, there is a widespread misapprehension that social unrest in periods of high food prices relates primarily to food shortages. In reality, the sources of discontent are considerably more complex – linked to political structures, land ownership, corruption, the desire for democratic reforms and general economic problems – where the price of food is seen in the context of general increases in the cost of living. Research has shown that while the international media have a tendency to seek simple resource-related explanations – such as drought or famine – for conflicts in the Global South, debates in the local media are permeated by more complex political relationships.

Even if hunger is unlikely to be an important cause of violent conflict, changes in food security can affect the course and consequences of conflict. When marginal areas benefit from a growth in valuable resources, for example through good harvests or aid distribution, this can – somewhat ironically – attract violent groups who seek to exploit the situation. On the other hand, poor harvests, low incomes, and poor living conditions, for example due to drought or forced migration, may make a population more vulnerable to radicalization and recruitment by armed actors, thus contributing to an escalation of violence. 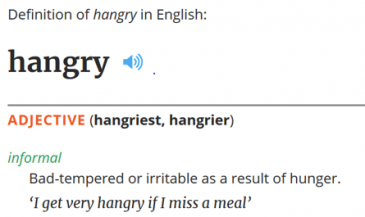 While the concept of being hangry is widely used in popular culture, its relevance may be limited as we seek to understand contemporary unrest events. PHOTO: Screenshot from Oxford English Dictionary

In the short term, humanitarian organizations working in conflict-affected areas face the challenge of reaching those most in need while avoiding worsening conflicts by providing valuable resources that may be exploited by armed groups. There are major opportunities here for innovation and improvement. Local and democratic support for humanitarian operations, measures that strengthen rather than undermine local institutions and markets, and the use of technology such as biometrics and blockchains to ensure that emergency aid reaches the intended target group, are examples of how humanitarian organizations can meet the challenges they encounter in conflict-ridden areas.

Short-term humanitarian help is extremely important for reducing human suffering, even though it may not necessarily resolve conflicts in the short term. In the longer term, targeted and long-lasting measures to improve food security and alleviate poverty will help create stability and form the basis for economic development, which in turn will lower the risk of future conflict. As an example of the latter type of measure, the World Food Programme has implemented projects such as “Food Assistance for Assets” and school meals, which explicitly seek to boost local institutional capacity and infrastructure, build interpersonal trust, and put money in the hands of poverty-stricken families. Such projects address problems relating to food security and create incentives to increase local production without destroying local markets by dumping cheap food produced elsewhere.

Long-term work through these types of programmes can also be a central part of the solution when conflict-ridden societies attempt to build stability and peace. Poor education, poverty, and high infant mortality – which are all exacerbated by food shortages – are among the most reliable predictors of civil war. Investing in measures that improve living standards, improve educational opportunities for children and young people, and promote the development of democratic institutions, will not only improve local food security in vulnerable societies, but will also reduce acceptance of violence as a means of resolving conflicts.

Good and very helpful information here.. Thank you so much