It’s clear the Trump administration takes a skeptical stance toward human-induced climate change, but the recently proposed climate and security panel might pave the way for having their cake and eating it too.

Last week news broke that the Trump Administration may assemble a panel on climate change and security, with the alarming inclusion of outspoken climate change denier William Happer as its lead.  Happer is perhaps most well-known for his stance on carbon dioxide, which he says has been unfairly demonized. He even founded the CO2 Coalition which he hopes to use in highlighting how beneficial CO2 is for the earth.

The proposed panel on climate and security will, according to a leaked memo as reported by the Washington Post, take a skeptical view of climate change and challenge it directly. The memo says that ‘these scientific and national security judgments have not undergone a rigorous independent and adversarial scientific peer review to examine the certainties and uncertainties of climate science, as well as implications for national security’.

Understandably, most news coverage has focused on the fact that the panel’s proposed inclusion of Happer, combined with the language of the memo, clearly points in the direction of denying climate change. The prevailing speculation is that the White House wants to push back on an established stance from the Department of Defense that the climate is changing and that it poses a threat to national security.

But what is perhaps even more concerning than Happer or others stoking anti-climate change flames is the possibility of the administration using the panel’s findings to fund increased military and security activity without ever having to address or acknowledge the causes of climate change.

Climate and Conflict Are Not Inextricably Linked

The 2017 annual defense policy bill had support from both sides of the political spectrum, and explicitly stated that climate change ‘is a direct threat to the national security of the United States and is impacting stability in areas of the world both where the United States Armed Forces are operating today, and where strategic implications for future conflict exist’.

Yet as research at Peace Research Institute Oslo (PRIO) and elsewhere has shown, the link between climate change and conflict is not clear-cut. There is still much to research when it comes to the cause and effect, and what possible outcomes are. For example, how will fragile states respond to an increasingly erratic climate? Not all the research points in a dire direction. Similarly, water scarcity and instability is a topic that elicits immediate concern, but some research shows that water cooperation could actually have a positive impact on interstate relations. Societies do not respond to shifting climatic conditions in a direct and uniform manner; understanding what it takes for increasing environmental stress to cause social stress, and how such stress, in some but not all cases, lead to adverse outcomes, is a key challenge that researchers are currently grappling with.

Fuel to the Border Fire

With the proposed panel, the Trump administration can have their cake and eat it too. Many climate change deniers aren’t so much deniers as reformists, arguing that the climate is warming, but that this is part of a natural and cyclical pattern. The panel does not need to conclude that climate change is human-made in order to argue for more funds. They simply need to argue that climate change, regardless of why it happens, is a threat to US national security. Then they can go on divvying up public lands for mining, pulling out of international climate agreements, and promoting coal over renewable energy, while still linking climate and conflict.

This will help pave the way for increased funding in a variety of security areas. For example, the southern border: argue that water scarcity in Mexico, caused in part by climate change’s erratic weather and droughts, will drive more migrants toward the US. Take it a step further, and the panel could argue this water scarcity is a security threat (as a panel already did in 2012) which could lead to conflict. It’s the perfect fuel to the fire for beefing up border security. Never mind that water scarcity itself is not the problem, but rather the politics around water which can cause conflict, and that the US could walk straight into a conflict of its own making, especially considering the water agreements that exist between the US and Mexico already. 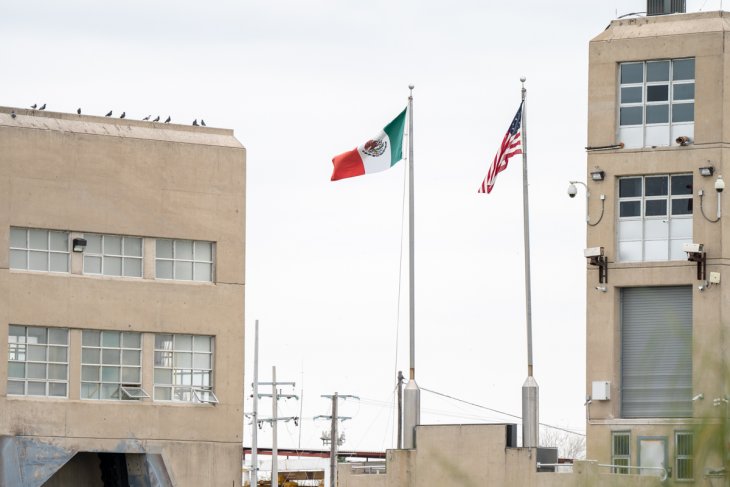 Treating the Symptoms, but Not the Illness

But that’s only one example. There are numerous eventualities the Trump administration could use as pretext for future military intervention or security involvement. Flooding, drought, desertification, wildfires – these are all events which have happened and will continue to happen increasingly because of climate change. What else do they have in common? They were all listed in the January 2019 Report on Effects of a Changing Climate to the Department of Defense (DoD) as factors which could increase the vulnerability of DoD installations both in the US and abroad.

If the Trump administration chooses not to push back on DoD reports linking climate and conflict, but rather reframe the issue and double down, then in a security context, the concern is not that the Trump administration will deny climate change. The much more frightening likelihood is that they will interpret it for their own ends without ever addressing the causes. Previous reports from the US government have also used climate change as reason for future increased spending. With the Trump administration’s panel, the situation could get worse. By treating the symptoms but not the illness, by responding to the effects of climate change but not acknowledging the origins, military spending will have no end in sight. Without actually acknowledging that climate change is something we can shift the course of, there will be no end to the money that could be poured into this issue. The US spends more on its military than any other country. The budget approved for 2019 was 1.3 trillion dollars. The country could be headed for a never-ending war against a foe it refuses to truly recognize.

Indigo Trigg-Hauger works in the Communication Department at the Peace Research Institute Oslo, Norway. She graduated with a Masters degree in Peace and Conflict studies from the University of Oslo.