The last decade was the warmest on record, with 2020 tied with 2016 for the all-time high average annual global temperature. This 10-year period also saw armed conflicts at severity levels not seen since the Cold War era. Could there be a causal link between these trends?

To the frustration of policymakers and laymen alike, empirical research has been unable to provide a simple and coherent answer to this question. Instead, studies of climate-conflict connections have for a long time continued to produce diverging findings and – occasionally – inspired heated debates. So, where do we stand?

In a review article introducing a new special issue of the Journal of Peace Research (JPR) on the security implications of climate change, we assess the nature and extent of scientific progress in climate-conflict research over the past decade. As yardsticks for measuring progress, we identify seven key research priorities frequently advocated in earlier reviews of the quantitative literature. 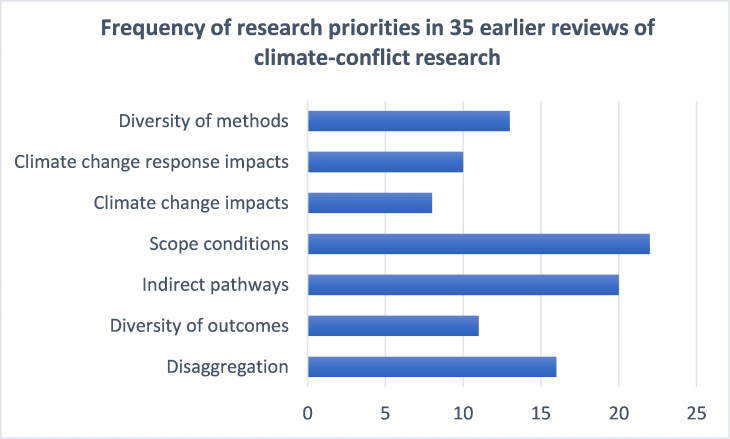 Have scholars responded to these calls, and if so, has this led to converging scientific evidence on climate change and conflict? The short answer is a qualified ‘yes’ to both of these questions.  However, progress has been uneven and evidence remains somewhat scattered. As Nils Petter Gleditsch argues in the new JPR special issue, the discourse on climate security tends to follow the logic of earlier environmental security debates, emphasizing the conflict potential of increasing resource scarcities, even though the stakes are higher and security challenges are more complex in the era of climate change.

Most scientific progress can be detected in terms of understanding subnational dynamics of conflict risk. Here, the literature has transformed considerably over the past decade, aided by improved access to household survey data, more detailed conflict event datasets, and geospatial statistical methods. This trend continues with the new special issue. In the JPR special issue Ore Koren and co-authors use geolocated twitter-data to study how local food and water scarcities fuel unrest in Kenyan cities, and Alexander De Juan and Niklas Hänze’s survey-based analysis reveals that, contrary to expectations, drought does not contribute to intergroup polarization in East Africa.

We find in our review that the research community is paying increased attention to conflict outcomes in complex environments and between states. For example, Neil Adger and co-authors apply a broad human security lens to study how environmental hazards such as flooding and water logging exacerbate perceived insecurity among urban migrants in Bangladesh. In another novel study, Cody Schmidt and colleagues shift focus to the interstate sphere and find that anomalous climate conditions can shape the risks of new diplomatic conflicts and militarization of ongoing disputes.

We also note some progress along several other research priorities shown in the figure above. First, empirical investigations more often consider plausible indirect pathways between climate and conflict. For example, Andrew Linke and Brett Ruether’s JPR article shows that fertile agricultural lands have been targeted by all sides to the Syrian civil war, notably during drought or in the growing season when the strategic value of crops is higher. Likewise, more studies are investigating the potential role of migration in translating adverse climatic shocks into armed conflict, although the evidence for this link remains mixed. Tellingly, Vally Koubi and co-authors report that urban Kenyan migrants displaced by multiple overlapping climatic hazards reveal higher willingness to protest than other migrants, contrasting Kristina Petrova’s conclusion that flood-induced displacement in Bangladesh generally is unrelated to protest frequency.

Moreover, researchers are increasingly paying attention to contextual factors that aggravate or lessen societal impacts of climatic hazards. Two contributions to the JPR special issue shed light on some such factors: Paola Vesco and colleagues find that the effect of drought on conflict risk is contingent on agricultural dependence, whereas Tobias Ide and co-authors show that demographic and political factors are important conditions for flood-related social unrest.

We find little evidence of progress on two priorities commonly highlighted in earlier reviews. First, empirical research remains almost exclusively focused on short-term climatic changes (e.g., floods and droughts), and little is known about how conflict risk responds to more gradual but permanent changes in climatic conditions. To address this lacuna, climate-conflict research could learn from approaches in climate sciences more broadly as advocated by Katharine Mach and Caroline Kraan. Second, we still lack systematic research on the extent to which policy responses to climate change (adaptation, mitigation) affect conflict risk. As Joshua Busby writes, this knowledge gap is especially concerning for policymakers seeking to develop climate policies to assist the most fragile and vulnerable societies in the Global South.

So, returning to the initial question, what does the research say about the overall relationship between climate change and armed conflict? Well, it’s complicated. Despite scientists agreeing that climate has played a modest role as driver of armed conflict compared to dominant factors in modern times, uncertainty about its true role remains high. Looking forward, it is clear that climate change will increasingly push populations beyond the range of experienced climatic extremes, which may trigger tipping points in nature and societies alike. This means that future climate security risks are uncertain but likely much higher than current ones.  Such risks can only be managed by concerted, and conflict-sensitive, climate change adaptation and mitigation. Identifying the best content and approach of such projects requires continued dialogue and collaboration between science and policy. 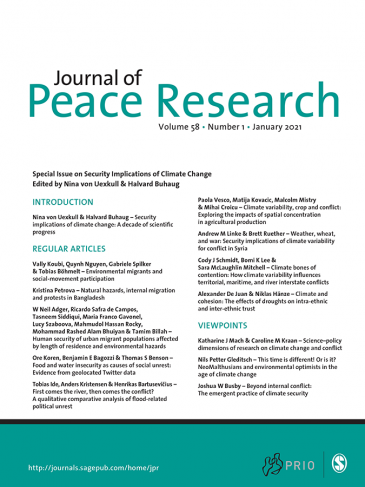 This blog post originally appeared in the Wilson Center’s New Security Beat. Read the new special issue of the Journal of Peace Research on ‘Security implications of climate change’ here (note: access to some articles may require journal subscription). We acknowledge funding from the Research Council of Norway to the ‘CROP’ research project.