In the same manner as societies are developing policies to strike the optimal balance between public safety and social and economic cost of COVID-19, the international community is negotiating strategies to address climate change. However, unlike lockdowns, vaccination, and other responses to the ongoing pandemic, risk-reducing effects of alternative climate policies cannot be observed in real time. Instead, to assist decision-makers, scientists have developed a scenario framework that allows analyzing how different socioeconomic development pathways (SSPs) and global warming trajectories (RCPs) jointly may affect nature and society over the 21st century. Over the past handful of years, literally thousands of published studies have used the SSP-RCP scenario framework to explore implications of climate and societal change for a broad range of outcomes. Can we use the same approach to forecast climate change impacts on armed conflict?

As we have written with colleagues elsewhere, conflict researchers have been slow to respond to this opportunity, and long-term consequences of climate change for peace and security remain largely unknown. The reasons for the scarcity of scenario-based conflict studies are partly a reflection of the field’s emphasis on more immediate security challenges but also a result of non-trivial methodological challenges, including complex causality and a modest historical association between climatic conditions and armed conflict.

However, recent years have seen several attempts to address this research gap. Early efforts (see, e.g., here and here) focused exclusively on how future conflict risk might evolve in response to non-climatic factors, such as demographic and economic changes consistent with alternative emissions trajectories. A more recent study additionally accounts for the direct influence of temperature and finds that further warming will increase the frequency of African conflict events over the next 50 years, but only if countries follow less optimistic political and socioeconomic development scenarios.

In a new study led by hydrologists at Utrecht University, we build on this research but implement two key novelties. First, we estimate how precipitation deficits and other climate-driven hydrological changes affect conflict risk into the long-term future, based on how these conditions affect conflict today. Second, we make use of a new machine-learning model that allows detecting and simulating more flexible, non-linear associations between climate and conflict.

In line with expectations, we find that overall conflict risk gradually declines across Africa in the most optimistic scenario (SSP1-RCP2.6, implying rapid and sustainable economic growth and modest climatic changes) whereas the most pessimistic scenario that we consider (SSP3-RCP6.0, denoted by slow economic growth, high population growth, and significant global warming) suggests sustained high conflict risk in many of the continent’s current conflict hotspots. The figure above shows the spatial distribution of projected mid-century conflict risk for these two scenarios.

Interestingly, our results suggest that hydrological conditions are connected with local conflict risk in more complex ways than previously uncovered. In several dry areas, notably Southwest Africa and the Horn, further drying is projected to reduce relative conflict risk, whereas in semi-arid Sahel, scenarios that entail loss of soil moisture are associated with a relative increase in conflict risk. More detailed research is required to uncover the reason for the projected heterogenous effect of drying across African drylands.

Also as expected, the hydroclimatic indicators exert much less influence on conflict than the socioeconomic and contextual variables do, as visualized in the figure below. In other words, the evolution of conflict risk in Africa toward 2050 according to this analysis is likely to depend less on shifting hydroclimatic conditions in and of themselves than on future societal changes. This conclusion is comparable with that of a recent expert assessment. 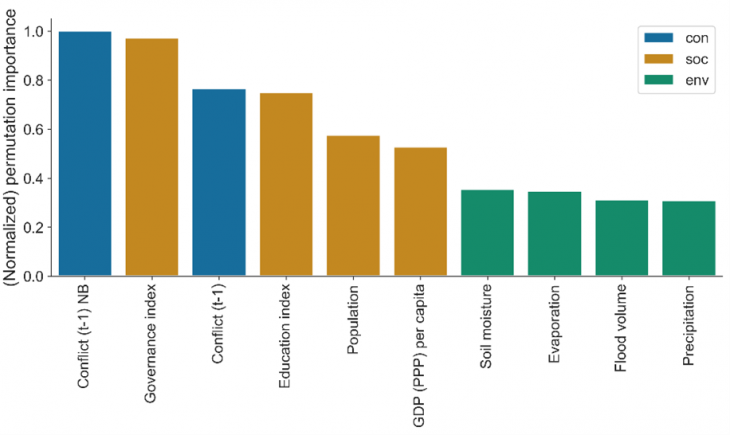 Although these results are broadly in line with the state of the art, a number of caveats deserve mentioning. First, we stress that such scenario-based analyses are not attempts to correctly predict future conflict in a weather forecasting sense. Rather, the purpose is to explore plausible implications of alternative, stylized scenarios of climate and societal changes, based on certain modeling assumptions. In that sense, the scenario projections and the simulated consequences for conflict risk may be better thought of as boundary conditions for future changes in natural and social systems.

Second, our analysis by design assumes that the causal association between hydroclimatic conditions and conflict risk remains constant over the time period considered here (1995–2050). This is a common assumption in scenario-based impact assessments, but its plausibility over longer time periods can be questioned. Future research should relax this assumption and assess the importance of (un)successful adaptation for future risk in high-vulnerability settings. Further modeling complexity can be added by allowing for feedback effects between climate change impacts and future socioeconomic and political development.

A fourth limitation worth mentioning concerns the quality and real-world relevance of the underlying socioeconomic scenario data. Even though these scenarios are intended to represent a varied set of alternative imagined futures, as opposed to representations of the most plausible futures, recent evidence suggests that the SSP projections, in fact, might severely underestimate vulnerability to climate change in the Global South. Tellingly, projected future economic growth in the least developed states far exceeds observed growth over the past decades even in the most pessimistic SSP3. This concern is discussed in this blog post and documented in further detail in this article. We hope to address this substantial deficit in future research.

If mitigation efforts are not scaled up rapidly, global warming and associated growth in the prevalence and severity of natural hazards will put unprecedented challenges on societies. Analytical challenges notwithstanding, it is therefore not only a natural, but also a necessary step for conflict research to catch up with the rapid developments in climate sciences and move beyond historical analysis to provide a better understanding of likely security implications of climate change. Improving on projections and modeling techniques, including leveraging artificial intelligence and capturing feedback loops, are important steps in this direction.

For further reading, see our blog post presenting the recent special issue of the Journal of Peace Research on security implications of climate change.