Anthropogenic climate change poses unprecedented threats to socio-ecological systems, affecting the lives of millions of people around the world. Among others, global warming has resulted in an increased frequency, intensity and duration of extremes, such as heatwaves, droughts and heavy precipitations. Climate-related impacts include alteration of ecosystems, disruption of food production and water supply, damage to infrastructure and settlements, increased morbidity and mortality, and potential implications for mental health and human well-being. 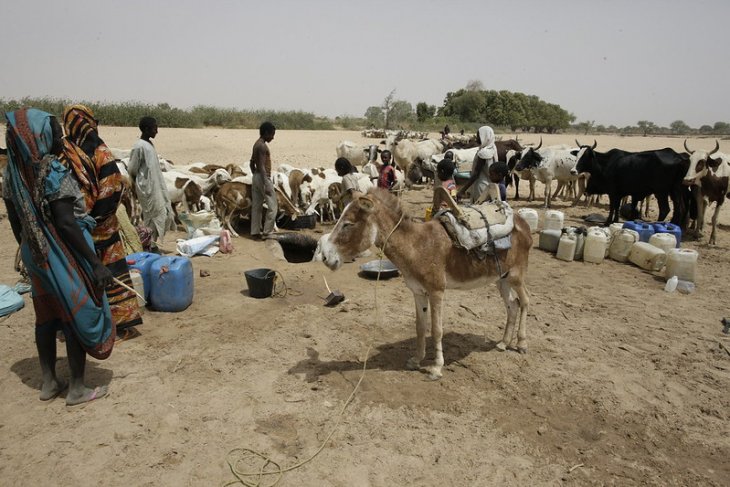 Food production is among the sectors that are most vulnerable to the impacts of climate change and variability. According to the FAO, prior to the COVID-19 pandemic, almost 690 million people were undernourished (Figure 2). This means that slightly less than 9% of the global population is facing chronic food deprivation and this trend is projected to increase as a result of future climate changes. Climate-related extremes represent a major threat to agricultural productivity and contribute to shortfalls in food availability and access to food. Without adaptation, global yields are expected to decrease at a pace of 1.5% per decade. Adaptation and technological innovation can mitigate losses, but in the hottest regions of the planet, populations might be unable to adapt if temperatures increase by 3°C or more. 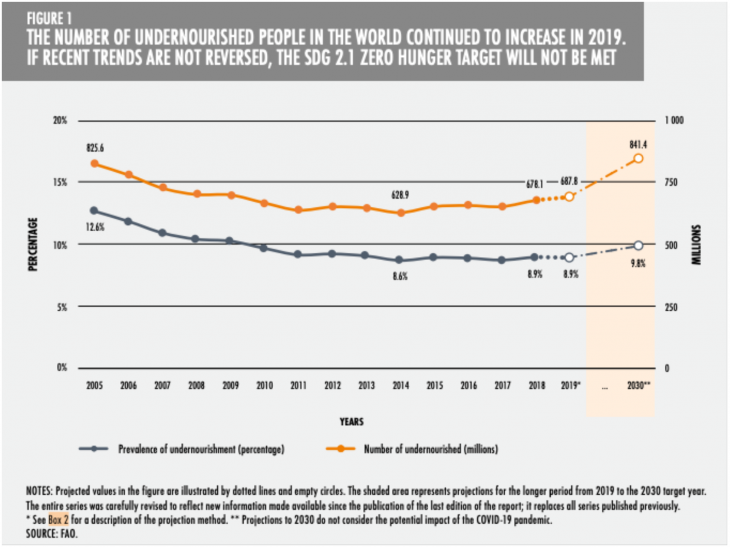 Figure 2. Number of undernourished people in the world.

Climate-driven impacts on food production might have destabilizing effects in many regions of the world, especially in agriculturally-dependent communities, which are more vulnerable to shocks. Although it is unlikely to assume that climatic conditions and environmental hardships have a direct effect on security, they may however represent a risk factor which contributes to increase the probability of conflict.

In a recent paper contributing to a Special Issue on climate security published in the Journal of Peace Research, we provide an in-depth study of the indirect pathways connecting climate variability, crop production and conflict. The paper attempts to answer two main questions: How does climate variability affect the distribution of crop production across space and time? How does the spatial distribution of food production in turn shape the risk of conflict? We argue that an assessment of the spatial distribution of agricultural production is paramount to understand how the risk of violence is affected by climate-related crop failures.

The impacts of climate-related extremes on food production are in fact not homogeneously distributed. Not only do the magnitude and extent of climate change vary across space and time, but also the capacity of countries’ to respond and adapt to weather shocks can differ across locations and groups. Climate-related impacts may vary from one community to another, and between rural and urban areas, for example. It is presumable that climate change increases the concentration of agricultural production in one or few areas and shifts the distribution of food within countries. National statistics, however, hide these changes, as variations in the distribution of agricultural production might not correspond to an aggregate change in the total quantity of harvests.

Shifting weather conditions and increasingly unpredictable impacts of climate variability may thus result in some locations and groups being excessively affected, and lead to sharper differences in food access and supply at both the global and local levels. Heterogeneous crop failures can therefore have a disproportionate effect on some locations and groups’ livelihood, for example by deteriorating rural households’ means of sustenance and contributing to income losses.

Overall, some groups will be particularly worse off, while others might be relatively less affected. Relative differences in access to food may raise resentment in some groups against those that are perceived to be better-off, thus easing rebels’ effectiveness in mobilizing people, especially around a common identity. In other cases, this heterogeneous discontent might be channeled against the State, especially if the government lacks the will or the capacity to satisfy the population’s most basic needs, or if in other ways citizens blame the government for their livelihood impairment.

Our study shows that security risks may stem from this relative deprivation induced by heterogeneous adversities — rather than from absolute losses in food production. Relative differences may foster grievances, spark competition for scarce resources, or encourage deliberate efforts to deny adversaries’ access to harvests. Individuals and groups might be induced to move from resource-scarce to comparatively resource-wealthier regions, in a quest for better livelihood conditions, thus triggering resource looting and competition. All in all, motivations to use collective violence may increase.

Darfur is a case in point. The spatial distribution of attacks against villages in the early phase of the civil war (2003–2005) substantially overlaps with areas that had relatively higher availability of natural resources during the decades prior to the civil war. Frequent drought episodes in the 1970s up to 1990s had in fact forced people to migrate to regions with better livelihood opportunities. Many Arab groups started occupying fertile areas for their tribes; local communities accused in-migrants of over-exploiting their resources, and militias formed in the areas of resource contention. As the case of Darfur exemplifies, environmental conditions cannot be proximate causes of conflict, but rather a contributing factor that exacerbates previous cleavages and tensions, and ultimately increases (or decreases) the probability of violence.

Previous research focusing solely on the absolute quantity of crop production was therefore missing an important dimension of populations’ vulnerability to environmental shocks: the spatial distribution. Existing studies on the link between climate variability, agriculture and conflict tend to use country-level, aggregate measures of crop production which overlook relevant spatial patterns. Disaggregated studies may partially overcome this measurement problem by examining the effect of climate shocks locally, but they are unequipped to investigate the distributive patterns systematically, simply because this cannot be undertaken in traditional empirical frameworks.

To overcome these limitations, we construct a time-variant Gini Index of crop production (GICP) within countries (Figure 3). GICP provides a measure of the spatial distribution of crops, that is, how concentrated or dispersed crop production is across locations. Higher values of GICP correspond to food output being concentrated in few areas of the country in that year, while lower levels of GICP indicate that crop production is more homogeneously distributed. We show that GICP is a good measure of populations’ livelihood and access to food.

Incorporating GICP, we can adequately investigate how climate variability influences the spatial distribution of agricultural production, and how this in turn affects the risk of conflict. The argument proceeds in three steps. First, the negative impacts of climate variability increase the spatial concentration of crop production within countries. Second, the spatial distribution of crop production, which measures how food access and livelihood conditions vary across locations, is a relevant factor to shape the impact of climate on conflict, especially in agriculturally dependent countries. Third, the combined effect of climate extremes and spatial concentration of crop production increases the likelihood of conflict onset. 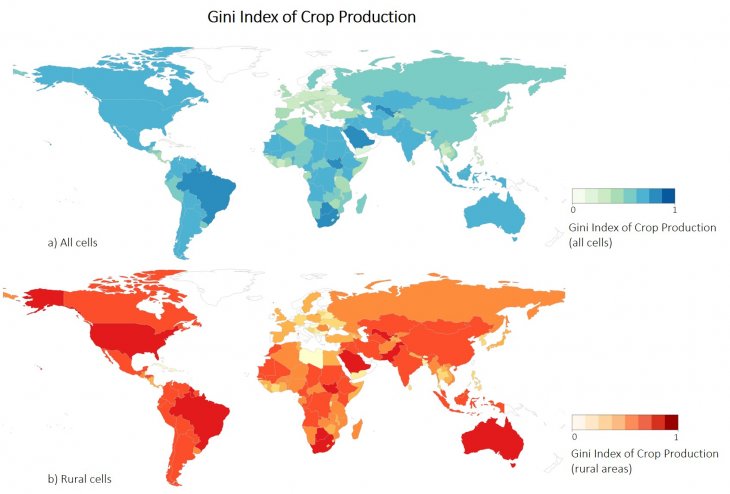 Our results show that changes in climatic conditions do affect the spatial distribution of agricultural production, contributing to a concentration of crops in one or few areas within countries. This confirms our argument on the importance of investigating distributive patterns more than aggregate quantities of agricultural production. Although agroclimatic indicators alone do not seem to have any effect on conflict, we find that crop production distribution may condition the effect of climate variability on violence. In particular, the combined effect of climate variability and crop production concentration incentivize mobilization and increase the risk of civil conflict onset. Reiterating the importance of spatial relative differences for security, we do not find any significant effect when replacing our GICP indicator with a measure of the total quantity of crop. These findings suggest that higher spatial differences in crop production shape populations’ livelihood opportunities and ease rebels’ effectiveness in mobilizing individuals, especially along identarian lines.

Results are mainly driven by countries that rely heavily on agriculture. Our study shows that, in countries strongly reliant on agriculture, the combination of less suitable climate conditions and more spatially concentrated crop production can lead to an increase in the probability of civil conflict by 14% (Figure 4).

This is not surprising; countries where the majority of population is employed in agriculture are more vulnerable to climate-related crop failures, as well as related shocks to food prices and agricultural income. Overall, our findings show that changes in local livelihood and food access may not be the primary motivation to join rebel groups, but still contribute to mobilizing protests around pre-existing grievances, some unrelated to food access. Among these conditioning factors, agricultural dependence is paramount in shaping the effect of climate-related impacts. Vulnerability assessments and policy initiatives to increase populations’ resilience to shocks therefore need to carefully consider agricultural dependence and invest increasing efforts to schemes and tools that promote adaptations in the agricultural sector. 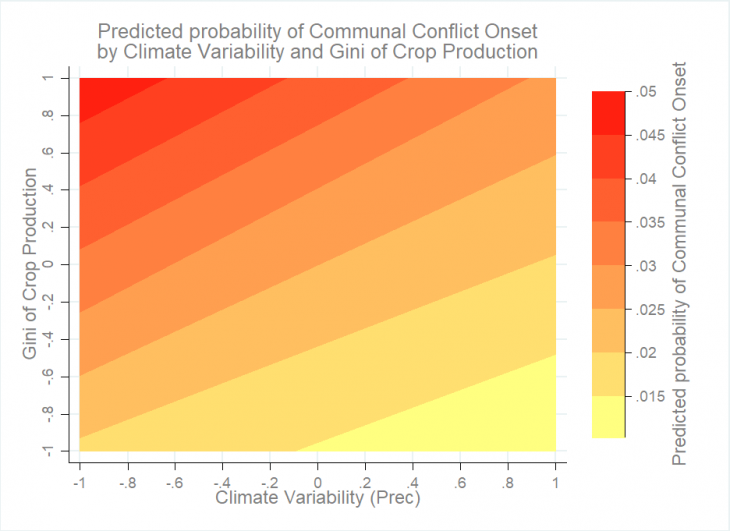 Figure 4. Combined effect of climate variations and crop production concentration on the risk of civil conflict.