Images of refugees using smartphones have now become common in the Western media landscape, and everybody seems to have learned that refugees and migrants, too, use smartphones.

Indicative of this awareness, European governments are now looking into how to make use of these assets in their identity checks and in the processing of asylum seekers’ demands.

As such, smartphones are not just a key tool for surviving long and dangerous journeys, but also an asset that makes anyone using it more vulnerable to digital surveillance. In this blog post, we discuss how smartphones are becoming the new best and worst friend of refugees and migrants. 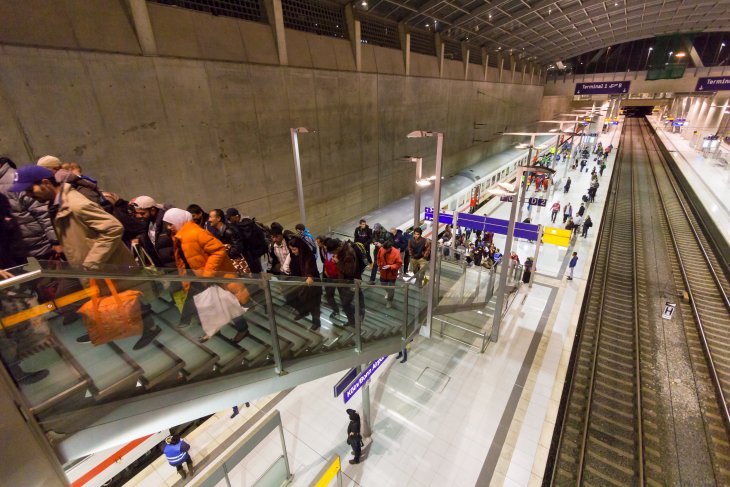 Summer-fall 2015: smartphones and the ‘refugee crisis’

A year ago, over the summer and fall of 2015, Western media started to buzz about refugees using smartphones during their journeys. At first, the media coverage was centered on the very fact that many refugees then arriving in Europe actually had a smartphone. Responses soon followed however, mocking the European audience’s ignorance, for being surprised that refugees and migrants were ‘connected’ people too. Then, as pictures of refugees using smartphones became more and more common, media commentators highlighted how these devices should be considered even ‘more important’ than water, food and shelter, essentially as a tool to access information about where to find these when arriving in new places. Various initiatives, from new volunteers or established humanitarian organizations, soon followed, aiming to equip refugees with digital devices and granting them access to relevant infrastructures, from power-banks to sim cards and Wi-Fi networks.

Along with these initiatives, and the continued media coverage of the refugees’ arriving on Europe’s shores, the story of the refugee equipped with a smartphone became the new norm. The predominant narrative has been one of smartphones as enablers: empowering refugees to take care of themselves. In other words, the ‘resilient refugee’ is equipped with a smartphone. Another underlying narrative, a sort of extension of the smartphone as a life-saving tool, has been the on the smartphone as a tool allowing migrants to outsmart border controls, and even become less dependent on the “services” provided by smugglers – largely thanks to information exchanged on the best routes to follow. This should also have raised questions about the value of this information for border guards and European authorities. Yet, except reports about police agencies using social media to get their messages and warnings across to the migrants, there was little critical assessments about how this easily transportable device, storing amounts of sensitive personal information about people in often very insecure positions, could also become a further source of vulnerability.

Then, on 29 June 2016, Belgian media announced that the Federal Secretary of State for Asylum and Migration, Theo Francken, intended to propose a legislation to the Belgian Parliament that would allow Belgian immigration authorities to search asylum seekers’ digital devices (like cellphones and laptops). The Belgian Secretary of State claims that such an initiative is made possible by the provisions of the European Union (EU) Directive 2013/32/EU of 26 June 2013 on “common procedures for granting and withdrawing international protection”. Article 13.2(d) of this Directive provides indeed that “the competent authorities may search the applicant and the items which he or she is carrying”. Similarly, Thomas de Maiziere, the German Interior Minister, proposed to introduce provisions permitting law enforcement authorities to access smartphones and social media accounts of asylum seekers, in order to “make safety checks”, i.e. carrying out identification in the absence of ID documents and searching for security-relevant information.

The rationale behind such a move is that it would be instrumental in order to fight identity fraud, falsification of asylum seekers’ files, and more broadly, to support counter-terrorism efforts. The Belgian Secretary of State argued that up to 70% of asylum seekers lie concerning their situation in order to be awarded protection. He thus envisages the analysis of their digital devices as a kind of silver bullet solution, allowing relevant authorities to determine whether or not there is any falsification. The German Interior Minister however seems to rather emphasize the security-relevance of this new form of surveillance.

What is ultimately at stake is the emergence of digital refugees

Be the case of humanitarian action or of security practice, what is ultimately at stake is the emergence of digital refugees, where the digital – be their own devices or the ICT infrastructure to which they connect – may have a crucial role in the definition of their lives. A large part of the humanitarian discourse postulates that digital devices empowers migrants, and it seems to be in line with the migrants’ own accounts about how they rely on the smartphones during their journeys. However, what this discourse fails to properly acknowledge is that relying on digital devices means that people are also embedded into infrastructures that expose them to surveillance. For example, their own smart devices, their social media profiles or simply the telecommunication network they have to connect to can be used by governmental or other actors to control them and sort them socially.

Some forms of control may be wrapped in a benevolent intent, of providing necessary assistance to those in need. Yet, smartphones also generate massive amounts of users’ data, ranging from meta and communication data, to information posted on social media. This wealth of data offers to many actors a rather easy way to garner information, not only to establish the identity of would-be refugees, but also to surveil them through social sorting.

Now the tune seems to have changed into: “the digital device does not lie”

Fifteen years ago the bulk of the debate over the securitization of asylum seekers was on testing their identity and tracking their movements through the capture of biometrics, with fingerprints becoming the key information to be fed into the EURODAC database. Back then, the refrain of public authorities was that “the body does not lie”. Now the tune seems to have changed into: “the digital device does not lie”. It is also worth noting that smartphones and social media accounts are already used as a way to check people’s identity in some of the warzones that these refugees flee from. For example, it has been reported that Facebook passwords are requested at checkpoints in Syria, both by governmental and IS forces, so to identify people’s allegiance in the conflict.

While searches at checkpoints in war-zones and at immigration offices are very different surveillance practices, both highlight how digital data (the traces and data generated and stored by digital devices) comes to matter for a person’s life-chances. From this perspective, it is paramount for humanitarian actors to pair their cyber-initiatives with a thoughtful assessment of how they may also create further vulnerabilities.

Data protection and privacy thinking can and shall intervene, especially when European agencies and governments consider to access refugees’ smartphones. For example, the Belgian and the German initiatives should demonstrate their legality and proportionality – which is far from self-evident. One should not forget that the measures at stake are very serious interferences with the asylum seekers’ right to privacy. Following well established case-law of the European Court of Human Rights, the fact that such measures are explicitly provided for in a legislative provision is not sufficient to ensure their legality. One must also demonstrate that their proportionality as well as the absence of less intrusive measures that would lead to the same result.

When it comes to tech-driven humanitarian assistance, privacy and data protection impact assessments may offer a framework to develop less surveillance-prone initiatives and infrastructures. However, given the public/private nature of many humanitarian initiatives, and their transnational scope, the relevant legislative framework is often unclear. Thus, a serious reflection on the implications of the tech-based humanitarian assistance cannot be limited to questions of privacy and data protection. Of particular concern are the implications of a hybrid form of governance where private companies, state authorities, NGOs and international organizations fail to understand the surveillance implications of digital devices, or fail to set high standards of digital safeguards.

The recent Belgian and German governmental initiatives (and similar practices occurring at small scale around Europe, and also in Norway) remind us to set aside a too simplistic tech-enthusiasm, and rather start a more critical debate about how to reduce the vulnerability of digital migrants.