There’s a lot to gain from better management of migration. That was the idea that inspired States in 2016 to set out on a path towards a Global Compact for Migration. As a step in the process, UN Member States gathered in Vienna on 4 September to discuss the issue of migrant smuggling.

I was one of three expert panellists invited to speak. We had seven minutes each, so I made a statement that focused on one key issue: a large part of migrant smuggling today is about bringing people out of harm’s way and into a country where they can seek asylum. For many States, the main concern with migrant smuggling is therefore not a rising population of undocumented immigrants, but rather the uncontrolled inflow of people who will be able to settle legally, as refugees. 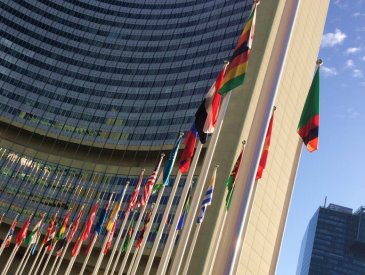 The service that smugglers provide is often expensive, but not necessarily exploitative or deceptive. This point was illustrated also by the two other expert panellists, Gabriella Sánchez and Mark Shaw. In different ways, the three of us asked for a critical look at whether the current strategy of fighting migrant smuggling is a constructive one.

Thereafter followed the ‘interactive discussion’ in which Member States could speak. We had been warned in advance that this is typically neither interactive nor a discussion, but essentially a reading of prepared statements.

That was indeed mostly true, until the Australian delegate, Ambassador Andrew Goledzinowski, took the floor. He spoke without a manuscript and took issue with the expert panel’s perspective. The Ambassador said that, in some quarters, migrant smugglers are mistakenly portrayed as if they are providing some kind of public service, bringing refugees to safety. This view is so widespread, Goledzinowski said, that he has coined a name for it: the Batman image of the migrant smuggler. Some analysts present the smuggler as a misunderstood hero operating in the shadows, and argue that States should get out of the way and let smugglers get on with their business.

But migrant smuggling is first and foremost a crime, Goledzinowski said, and that’s unlikely to change with the Global Compact for Migration. The fact that migrants consent to being smuggled doesn’t make a difference; consent is the norm in other crimes, too, as when pushers sell drugs to an addict.

I should have appreciated that the Australian ambassador engaged in dialogue, but I was primarily upset. These were the reasons:

First, let’s agree to disagree, but refrain from distorting each other’s views. None of the panellists had called for a decriminalization of smuggling, nor presented smugglers as good Samaritans. But we showed that the current heavy-handed approach can easily hurt the migrants it allegedly helps.

Second, Goledzinowski’s parallel with drugs is one that backfires. There are different approaches to the challenges of drugs-related crime, and the countries with the most aggressive approach can hardly be said to be the most successful. (An extensive literature in criminology addresses strategies for dealing with drugs-related crime and the associated social costs; we’re still lacking a corresponding literature on approaches to migrant smuggling.)

Third, I can accept that there are different interests and political positions–that’s the nature of democracy–but I resent it when States distort reality to make it fit their policy narrative. The general vilification of smugglers is a case in point. Painting a picture of migrant smugglers as intrinsically ruthless and exploitative is convenient for justifying restrictive migration policies, but hardly evidence-based.

Another example was raised by the delegate from United Nations High Commissioner for Human Rights: States sometimes refer to migrant smuggling as ‘trafficking’ because it recasts the interception of migrants (including refugees) as a form of ‘rescue’, even when it blocks access to protection.

Goledzinowski and I agreed afterwards that it is good to get disagreements out into the open. In fact, that was how I started my statement yesterday morning: emphasizing that migrant smuggling is a field that raises real dilemmas and reflects genuine conflicts of interests. There are no easy solutions. The danger is not to disagree, but rather to conceal the disagreements by tip-toeing around them or painting a distorted view of reality that makes simplistic solutions seem credible.

One Member State delegate grabbed me in the corridor afterwards. He said that entering the room in the morning, he thought everyone would be on the same page. But my intervention had opened his eyes to the real issues at stake. I am grateful for having had that impact.

Australia came out of yesterday’s exchanges as a uniquely brazen hardliner. Yet, the uniqueness perhaps lies more in form than in content. Goledzinowski intervened in a way that served to discredit the insights that challenge the prevailing law-and-order approach. Meanwhile, most European states are simply silent on these issues.

In an afternoon side event organized by the UN Migration Agency (IOM) (supported by the Turkish government and the UNODC) the Canadian delegate asked a crucial question: how, exactly, does the smuggling of refugees figure in the two processes towards the Global Compact for Migration and the Global Compact on Refugees? The answer is discouraging.

‘Migrant smuggling’ as a topic is squarely placed within the Global Compact for Migration. But the setup with the two compacts seems to have reinforced the UNHCR’s misguided view that ‘migrants’ do not include refugees. Consequently, the smuggling of refugees falls between the cracks. The Issues Paper on migrant smuggling is a balanced and good one in many respects, but it does not adequately address the fact that many smuggled migrants qualify for refugee status.

We are approaching the negotiations phase of the Global Compact for Migration. The bargaining power of Member States will play out and shape the outcome. But we can all contribute to ensuring that the bargaining addresses the realities of migrant smuggling. Migrant smugglers are not Batman style heroes — and I cannot think of anyone who argues that they are. Yet, they are also not intrinsically evil and deceptive.

More important than the moral standing of smugglers is the demand that many of them respond to: ways of exiting danger and entering safety. When we acknowledge this, it becomes clear that a single-minded war on smuggling will not eliminate human suffering, but perhaps shift it out of view.

Member States will have different views on how and where safety is best provided. That’s fair. But I hope that some of them will muster leadership and address migrant smuggling as an issue with real dilemmas and conflicts of interests. The easy way out for lesser leaders is to regurgitate a simple call for going after the bad guys.