Climate change is not a one-way street of cause and effect. International negotiations on climate change and the reduction of emissions are equally complex. A consistent Indian demand has been  green technology transfer from “high-emitting” developed countries. An equally longstanding principle is that of Common But Differentiated Responsibilities and Respective Capabilities, or CBDR-RC.

Despite the continuities, India´s negotiating position on the reduction of CO2 emissions is not easily summarized. At times, there haven been rapid shifts and apparent mismatches between statements of principle and action. India´s position and it’s involvement in Conference of the Parties (COP) summits has also developed over the years.

What can we expect from India at the COP23 Summit in Bonn? Find out more at the Hilton Bonn, 17 November 2017: Register here 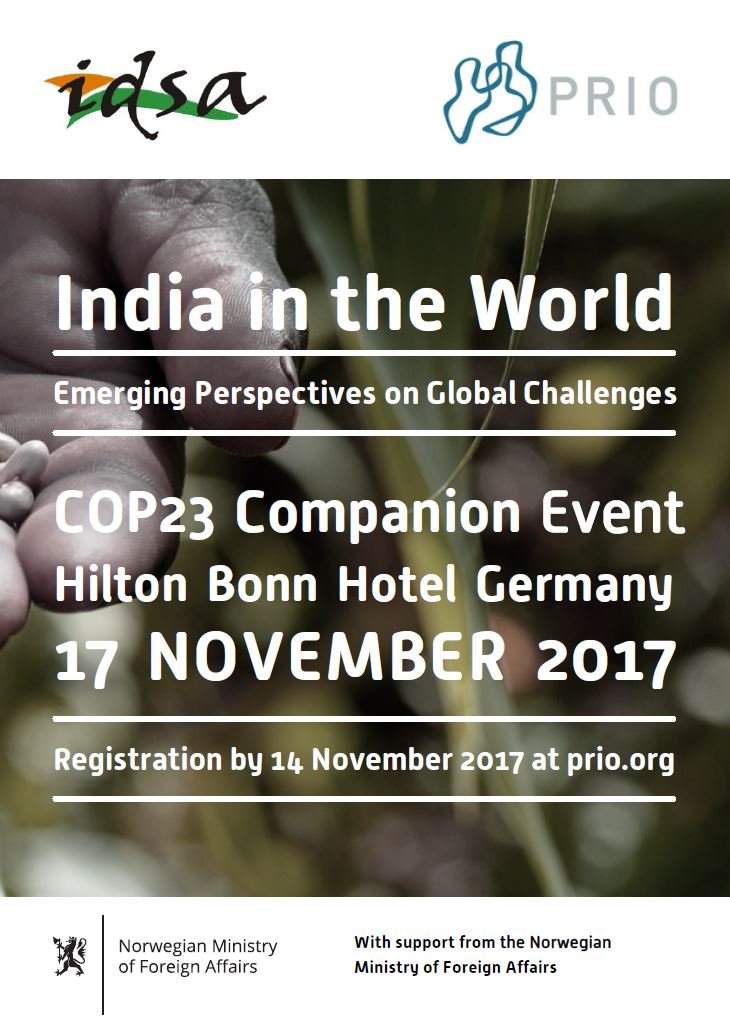 India has come to terms with global warming as a contemporary reality, rather than a distant threat. Amidst concerns about erratic weather conditions with record temperatures, drought and flooding, the Parliamentary Standing Committee on Science and Technology, Environment and Forests, has warned of a sharp increase in forest fires in 2016, in central India and the Himalayan region in particular. According to the 31-member committee, the number of forest fires has increased sharply, from 15,937 in 2015 to 24,817 in 2016. The self-propelling nature of the links between forest fires and global warming are of worry to policymakers who understand the spiral-like mechanisms by which climate change may accelerate. Increasing temperatures combined with decreasing rainfall contributes to a greater frequency of forest fires, while more frequent forest fires exacerbate global warming through the loss of carbon sink resources and an increase in CO2 in the atmosphere. Policymakers also recognize water shortage as a growing challenge. As expressed by Uma Bharati, India´s Minister of Water Resources: “From being a water rich country, we have become a water scarce nation”. As irrigation farmers compete with water-dependant industries, Indian politicians are increasingly held accountable for providing safe and accessible drinking water to the public.

Indian policymakers recognise the daunting challenges of climate change adaptation, such as preparedness for floods and landslides, disaster management and planning for large-scale relief efforts after extreme weather events. Across political affiliation, policymakers agree that India needs to be better equipped, whether to mitigate climate change, prepare for climate-related hazards, and adapt to a changing climate.

While they still remind developed countries about their responsibility for historical emissions, India´s current National Democratic Alliance (NDA) government led by the Bharatiya Janata Party (BJP) and Prime Minister Narendra Modi has made a strong statement for the promotion of green technology and clean renewable energy. The style and substance of India’s current negotiations is less argumentative, less confrontational, more engaging, and more nuanced. There is nevertheless a broad continuity in the thinking of political leaders as compared with the earlier United Progressive Alliance (UPA) government. Like his predecessors, India´s Environment Minister, Prakash Javadekar (now Human Resource and Development Minister) has represented India as a supporter of international processes. In the past, issues of “who is to blame” underpinned international climate change negotiations and not surprisingly, actions to address the challenges of climate change invariably reached deadlocks. The defensive line taken earlier by Indian negotiators has given way to more proactive approaches. A recent example of this is India´s significant participation in an alliance of 120 countries pursuing greater utilization of solar power at the 2015 Paris summit.

Geopolitical realignment and the emergence of new blocks has weakened the argument for a stark differentiation between the responsibilities of developed and developing nations, and emission reduction targets are no longer allocated on the basis of this divide. The Paris Agreement is concerned primarily with process, or simply put, with efforts to move in the right direction rather than specific targets in and of themselves. This is also reflected in the formulation of the Intended Nationally Determined Contributions (INDC).The voluntary nature of the INDC outlines what post-2020 actions would be required to deal with global warming and climate challenges. Other important dimensions of the Paris Agreement are provisions of finance and technology, and collaboration between countries to develop environment-friendly technologies, and to create a Green Climate Fund to help developing countries like India achieve their goals.

The Trump administration´s recent message that the USA would withdraw from the Paris Agreement was a discouraging moment, but in the end, the American u-turn has only resolved Indian policymakers to go above and beyond the Paris Agreement. India’s commitment to meet the climate change challenge is independent of the policy of the USA, or any other country. Prime Minister Modi emphasized the Indian conviction during his June 2017 visit to Paris, in a joint press conference with French President Macron, when he said that: “The protection of the environment and the mother planet is an article of faith.” The political leadership in India maintains that all countries, whether in the north or south, and whether rich or poor, have an important role to play in dealing with the global challenge of climate change.