The police, the military and militia groups in Libya are keeping refugees away from Europe. Reports link this situation to funding from the EU and Italy. The money passes through intermediaries, but Europe must bear responsibility nevertheless for making the funds available.

To restrict the numbers of refugees arriving from Africa, the EU and several of its member states are pursuing a policy that in practice relocates border controls from Europe to the mainland of North Africa. This started with measures at Europe’s land borders and then moved out into the Mediterranean with initiatives including Operation Sophia. Today we see European attempts to control migration being extended to the North African coast, and particularly to Libya. Measures include support to the Libyan coastguard, strengthening border controls in the south of the country, and offering people smugglers what are officially known as ‘alternative employment initiatives’. The latter may in reality be payments to militia groups to prevent refugees from coming to Europe. 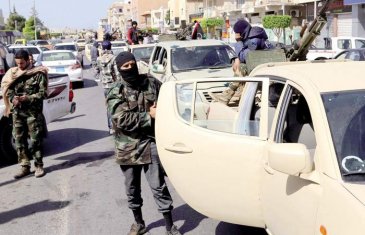 Armed men in Sabratha refugee camp outside Tripoli. Photo: Between Libyia and Italy

Earlier this year, Marco Minniti, the Italian interior minister, met with Libyan leaders and the mayors of Libya’s 14 largest cities. They agreed on measures to stem the flow of refugees from Libya to Italy. The Libyans have fulfilled their side of the deal: the number of refugees coming to Italy via Libya was 70 percent lower in July and August this year than in the same months of 2016. Aid workers in the Libyan port of Sabratha report that the reduciton is due mainly to the activities of a group known as the Dabbashi brigade, which is stopping refugees from leaving the city. The brigade is made up of police, armed civilians and soldiers. The reports are confirmed by refugees in Sabratha, and also by the few who have managed to reach Italy.

Although there is no documented link between the EU or Italy and the militia groups, it is safe to assume that the activities of these groups are a result of a deliberate policy on the part of Italy and the EU. While Minitti denies that money goes to the militia groups he apparently considers the results sufficiently legitimate to brag about. In a recent Associated Press article, however, Maggie Michael explains that the EU and Italian money is being channelled via the government in Tripoli (4). The funds are taken from larger EU aid payments and Italian grants. Despite the results, these measures are for a number of reasons ethically problematic and probably unsustainable in the longer term:

aid workers report the regular occurrence of violence, rape and other abuses

Firstly, aid workers say that militia groups have been behind attacks on refugees who are held in camps in Libya. The aid workers report the regular occurrence of violence, rape and other abuses. There are also reports that due to power struggles between the militia groups this autumn, there has been a sharp rise in the number of deaths, and many of the casualties have been civilians. Such abuses of power, and the fact that thousands of refugees are being held in prison camps, are something that the EU and the governments of European countries must take responsibility for and bring to an end.

Secondly, the news agency Reuters reports that many of those given the task of keeping refugees in Sabratha are former people smugglers. In other words, they have given up smuggling in return for financial reward. This gives the militia groups a hold over their paymasters: the militia leaders can set their price for giving up people smuggling. In practice this resembles a form of extortion and can scarcely represent an ethical, or sustainable, arrangement for preventing refugees from coming to Europe.

Libya is now riven by conflicts between competing military factions

Fourthly, this demonstrates the negative consequences of using military means to resolve humanitarian problems. The expansion of Europe’s direct influence to North Africa may result in long-lasting obligations to its collaboration partners. Entering into an alliance with parties to an ongoing conflict is very problematic if the only condition imposed by Italy and the EU is that the factions must be able to stop refugees reaching Europe. For example, would the EU and Italy be forced to offer military support if the Dabbashi brigade were attacked in Sabratha by a rival militia group? We need an explanation of the extent to which European countries are willing to become involved in violent conflicts in Africa in order to pursue narrow interests.

this goes against Norway’s principles for a humane refugee policy

Finally: what is Norway’s role in all this? If the EU and Italy are indeed cooperating with various armed Libyan factions, this goes against Norway’s principles for a humane refugee policy. Accordingly, the Norwegian government should clarify this matter, and follow up any breaches of these principles. Although Norway is not a member of the EU, much of Norway’s immigration policy is based on EU norms. In addition, Norway cooperates with EU bodies in the area of migration. For instance, Norway contributes financially to Frontex, which is responsible for controlling the EU’s external borders. Frontex is one of the organizations that have officially supported Italy’s new approach to stop the flow of refugees. Norwegian politicians and diplomats must put these issues on the agenda when liaising with EU bodies and in dialogues with representatives of the EU and the Italian government. We must state clearly that this is a line that we are not willing to cross, and that we expect our neighbours and closest allies to adopt the same position.