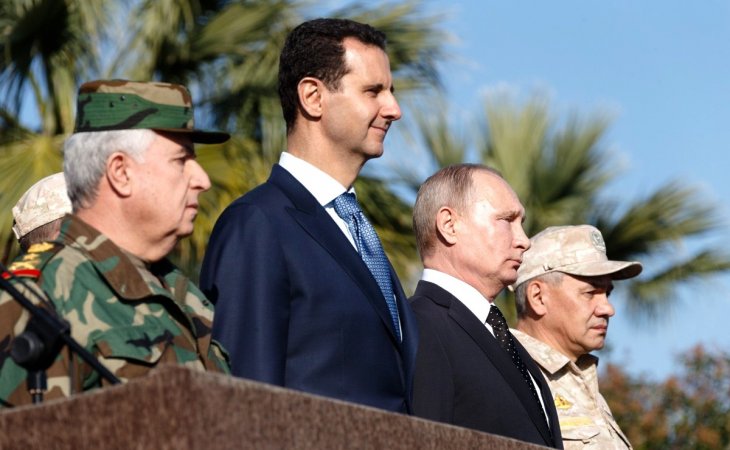 Putin and Assad at the Khmeimim airbase.

The civil war in Syria will soon enter into the seventh year, with around 400,000 people dead and over 12 million displaced. Although the so-called Islamic State has been militarily defeated in Raqqa, no one party is in control of the country—and there is hardly much hope that the tragedy will end soon. Turkish offensive on Afrin has just opened another page in this tragic story.

It was somewhat incongruous, therefore, that Russian President Vladimir Putin decided to declare Russian victory in Syria late last year—Russia hasn’t even met the very narrow definition of “victory” as ensuring the survival of the Bashar Assad regime. He ordered the withdrawal of the main part of Russia’s military grouping, and Defense Minister Sergei Shoigu reported that 38 planes and some support units had returned home. The thing is: This amounts to less than half of total Russian forces there, not even counting the private contractors. The planned expansion of Russian air and naval bases demands more troops for keeping them secure, and it is necessary to increase the number of Russian advisers if the Syrian army aims at launching new offensives, for instance against the Idlib enclave.

Russia remains stuck in the Syrian trap and at best, its perceived success will gradually fade into a stalemate. Meanwhile, the variety of bad options is rich, and the worst-case scenario of a sudden collapse of the Assad regime is not far-fetched.

More in the Bookings’ Order from Chaos article.

Premature announcements of political triumphs often result in negative blowback, but Russian President Vladimir Putin’s declaration of victory in the Syrian war was debunked particularly swiftly. Putin’s definition of victory included three key points: asserting the legitimacy of Bashar al-Assad’s regime and its control over most of Syria’s territory; strengthening the partnership with Turkey and Iran as the main framework for managing the residual conflicts; and withdrawing about half of the Russian forces, while expanding the naval base in Tartus and the Khmeimim air base. All three propositions have been badly shaken, if not shattered. Furthermore, Putin intended to sell the Russian victory to the West, thus pressuring the United States to accept the al-Assad regime and engage in cooperation with Russia, while cajoling the European Union into paying for Syria’s post-war reconstruction. Such bargaining has gone nowhere in both cases, and Russian tensions with US policy in Syria (muddled as it is) have reached a new high.

The most direct blow to Russian “victory” was delivered by a series of attacks on the Khmeimim airbase, which remains the main operational base for all Russia forces in Syria, including the semi-legal private contractors. The Russian Ministry of Defense boasts about the success in intercepting the “drone attack” on January 6, but it has given scant information about the deadly attack on December 31, which was exposed by the media (Novaya Gazeta, January 9, 2018). The high command insists that the militants involved had received technical and targeting support from abroad, even if the captured drones are primitive plywood models fixed with tape. Russian generals have also announced that the terrorist group responsible for the attacks was destroyed by a high-precision strike, which is impossible to verify since no group has claimed credit for inflicting the unprecedented damage.