The Turkish offensive on Afrin that began on January 20 had long been anticipated. But while the ruling Justice and Development Party (AKP) may hope this campaign can drum up anti-Kurdish nationalism ahead of the 2019 elections, it could also generate severe diplomatic backlash and exacerbate Turkey’s security issues. 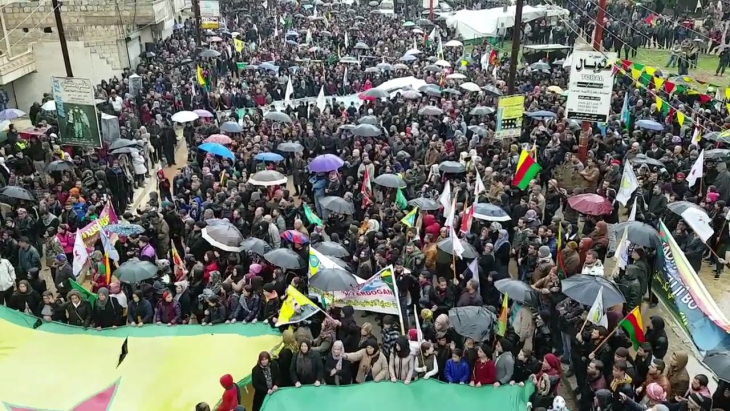 Demonstration in Afrin to support the YPG and the YPJ against the Turkish military operation, 19 January 2018. Wikimedia Commons

In terms of foreign policy, Turkey’s incursion into northern Syria strains its already precarious relations with the United States and places further stress on the Turkey – NATO relationship. One of the triggers for Turkey’s Afrin operation was the U.S. announcement on January 14 that it would create a Kurdish force of 30,000 to secure Syria’s border with Turkey and Iraq in areas held by the Kurds.

This move was, in the words of the Turkish Nationalist Movement Party (MHP) leader Devlet Bahceli, “the drop that made the cup overflow,” and contradicted Turkish expectations that the U.S. – Kurdish alliance in Syria would be dissolved once the Islamic State (IS) was defeated.

Furthermore, the threat of direct clashes between the United States and Turkey is ever-present. Although Erdogan had initially announced a swift operation in Afrin, he later declared that Turkey would continue eastward to the YPG-controlled town of Manbij. The town has been a thorn in Erdogan’s side since Turkey failed to capture it during Operation Euphrates Shield in March 2017, when the United States sent U.S. Special Forces to Manbij to protect its Kurdish allies. Although the United States initially approved Operation Euphrates Shield, misunderstandings arose around the aims and scope of Turkey’s incursion, illustrating the potential for confrontation between the two NATO allies presently in Syria. While Afrin is not part of the U.S.-led coalition’s area of operations, it is unclear whether the U.S. request to “exercise restraint” means the United States will intervene should Turkey press further into Manbij. In any case, the United States does not plan to withdraw from Manbij, where its patrols regularly exchange fire with Turkish-supported rebels—increasing fears of a direct confrontation with Turkey. And while NATO has accepted Turkey’s legitimate right to protect its borders, if the humanitarian crisis worsens considerably as a result of the incursion, Turkey will face additional condemnation.

The move also complicates Turkey’s relations with Russia, which is currently negotiating an agreement between the Kurds and the Syrian regime, as seen by Moscow’s Syrian National Dialogue Congress in Sochi. Russia, Turkey’s key ally in Syria, has opened Syrian air space for Turkish jets to attack Afrin, claiming a position of non-interference and choosing to deflect blame onto the United States for arming the Kurdish forces. This may help assuage tensions that developed in December between Turkey and Russia over Idlib province, where the Syrian army launched operations against jihadi groups with Russian air support, allegedly also targeting more moderate groups supported by Turkey. Yet Russia had its own agreement with the Kurds whereby Moscow established a military base in Afrin in March 2017 in return for Kurdish protection from Turkey. The Russian turnaround follows longstanding efforts by Moscow to convince the Kurds to cede control of their security and borders to Syria while maintaining a form of autonomy. This suggestion, which would have strengthened Syria’s sovereignty, proved unacceptable to the YPG/YPJ. According to Kurdish leaders, the ultimate aim of Russia’s decision to allow Turkey to enter Afrin is to push Kurds into the “arms of the Assad government,” thereby ostensibly withdrawing their dependence on the United States.

The international community’s de facto acceptance of the autonomy of northern Syria, called Rojava by the Kurds, has proven too much for the ruling AKP. Since 2012, Rojava has been effectively autonomous, ruled through a form of communitarian democracy led by the PYD, YPG, and YPJ. They administer three cantons—Jazeera, Afrin, and Kobani—wherein almost 5 million Kurds, Arabs, Syriacs, and Turkmen reside. In March 2016 the PYD changed the region’s name to the Democratic Federal System of Northern Syria, which aims to establish legal autonomy for the north within a decentralized, federal Syria. It was due to hold parliamentary elections in January, but these have now been postponed indefinitely due to the Afrin operation.

The Turkish state sees the legal international recognition of the PYD’s autonomy within a federal Syria as an existential threat that weakens its efforts to defeat the affiliated Turkey-based Kurdistan Workers’ Party (PKK), which both Turkey and the United States label a terrorist organization. However, the threat also provides an expedient rallying call for populist President Recep Tayyip Erdogan, who will seek reelection in 2019. For Erdogan, the Kurds’ strengthened position feels more like a public humiliation, particularly given that the only real opposition to his rule came during the 2015 elections, when the AKP lost its government majority for the first time since 2002 due to the gains of the pro-Kurdish People’s Democratic Party (HDP).

Most political forces have rallied behind the AKP, sharing its frustration with the international community’s willingness to support Kurdish autonomy. Devlet Bahceli, the leader of the right-wing MHP, lauded the operation’s efforts to defeat the YPG and PKK and reserved his harshest criticism for the United States, questioning how a fellow NATO country could be both a “friend and foe.” Turkish Prime Minister Binali Yildirim repeatedly emphasized during a televised press conference on January 20 that Turkey’s incursion, euphemistically named “Olive Branch,” aimed to save local populations living under the control of the PYD, YPG, and YPJ and should not be seen as an operation against the Kurdish people. Among other things, he claimed that IS militants—allegedly evacuated from Raqqa by U.S.-supported Kurdish forces—were now settled in Kurdish-dominated Afrin. Even the opposition Republican People’s Party (CHP), which had previously advocated for diplomacy, indicated it had “no objections” to the Afrin operation, finding it difficult to publicly oppose the other parties’ rhetoric of fighting terrorism.

Yet in addition to the strain it puts on Turkey’s diplomatic ties, the Afrin campaign also threatens to exacerbate the same security concerns that the AKP has used to justify the operation. Domestically, Turkey’s incursion risks reigniting the latent flame of Kurdish terrorism. Despite the Turkish government’s official emphasis that the incursion aims to bring peace, Turkish–Kurdish relations are at an all-time low after the 2012 peace process with the PKK failed and military operations in southeastern Turkey killed around 200 Kurdish civilians in 2015. Turkey continues to imprison leaders of the legitimate, pro-Kurdish HDP. In a Sterk TV interview on January 20, Murat Karayilan, a member of the PKK’s Executive Committee, warned that the attack against Afrin would be seen as an attack against all Kurdish people, adding ominously that the PKK would not remain silent.

As a result, even though the estimated 8,000–10,000 YPG and YPJ fighters in Afrin are facing both the second-largest army in NATO and the Turkey-backed Free Syrian Army (FSA), Turkey may find entering Afrin considerably easier than securing control and establishing peace and prosperity. Despite its firepower, Turkey’s military has been weakened by the imprisonment of many of its leading officers after the 2016 failed coup against Erdogan.

Thus, the risky venture may achieve Erdogan’s desired results: weakening the relationship between the Kurds and the United States and crushing the Rojava experiment. In Turkey, fears over domestic security could give Erdogan an additional justification to prolong the state of emergency that has been in place since the failed coup of 2016 and emphasize his image as the regional strongman ahead of the 2019 presidential election. Through the Afrin operation, Erdogan is able to harness the deep-seated fear of Kurdish irredentism that cuts across party lines. However, while the stated aim is to protect Turkey from acts of Kurdish terrorism, it may have the opposite effect.