May the shifting superpower dynamics bring hope for Afghanistan?

Both Moscow and Beijing are displaying increasing interest in Afghanistan, after a decade and a half of domination by Washington. This shift is having effects in both Afghanistan and among its neighbours. 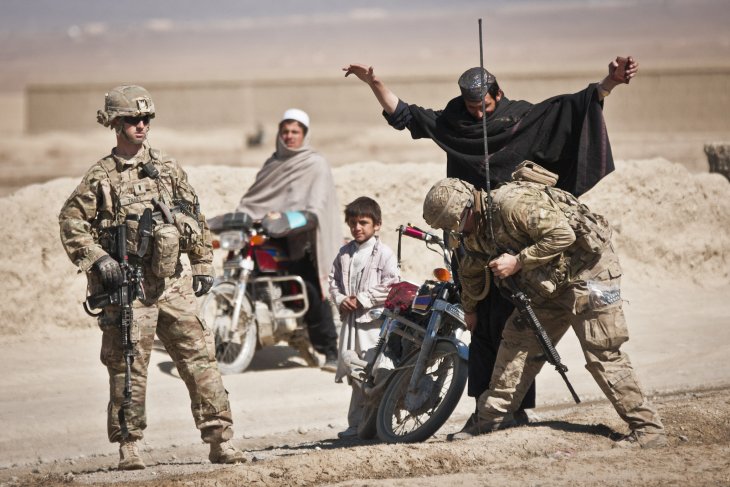 The US focus is now the war against the Taliban. Few believe this will last long. Meanwhile, Russia is in dialogue with the Taliban. Photo: US Army Europe / Flickr

Recent news from Afghanistan has been dominated by a series of dramatic terrorist attacks. It seems as though the Taliban and IS are engaging in a gruesome competition to cause the greatest harm to civilians. Discontent with the government is expressing itself in widespread protests in large cities. The Taliban seem to be gaining ground. President Ashraf Ghani is pressing on with his reform agenda, replacing a number of people in his administration. But so far he has not succeeded in his initiative to oust Atta Noor, the powerful governor of Balkh Province. Two months past being sacked, Noor remains in his position. Alongside this dramatic domestic situation, the international power play surrounding Afghanistan is changing.

Historically, the “Great Game” was a term coined in reference to the rivalry between the British and Russian empires in Central Asia from the mid-19th century. The modern Afghan state was created as a buffer between two empires. As a weak but independent state, Afghanistan maintained a cautious foreign policy, mainly focused on balancing between the superpowers. This balance gradually eroded in the 1960s and 70s, and collapsed after the Communist coup of 1978, which became the prelude to decades of war.

But the conflicts in Afghanistan are affected not only by world superpowers: the role of its neighbours is at least as important. In our book A Rock Between Hard Places, Shahrbanou Tadjbakhsh and I develop the hypothesis that interventions in Afghanistan by its neighbours are not motivated primarily by their interests there, but by their own regional existential problems. Pakistan, for example, plays a very important role in Afghanistan, but is first and foremost a country within the South Asian region, which fearful of India above all else. Against that background, an increased Indian presence in Afghanistan, with strong support from the United States, is anything but good news for Afghans.

In the United States, political leaders have long grown weary of a war that costs money and soldiers’ lives, and that has little popularity among voters. One of Donald Trump’s campaign pledges was withdrawal from the war. After months of vacillation, he chose instead to scale up military operations. At the moment the focus is on warfare, the logic being that negotiations will follow once the Taliban acknowledge that they are losing. The United States is making the point that it will remain in Afghanistan as long as necessary (this is also a criticism of Obama’s self-imposed deadline for withdrawal). But it is difficult to believe that Trump will commence a new election campaign in a couple of years without first significantly downscaling military operations in Afghanistan.

Russia saw the vacuum that emerged as a result of the declining US’ involvement. Immediately after Trump was elected, Russia convened a peace conference in Moscow, with only China and Pakistan in attendance. Subsequently there have been further such meetings, with ever more countries in attendance, but neither the United States nor the Taliban have participated. The Russians have not concealed the fact that they are cultivating links with the Taliban, who in turn is eager to ensure that Pakistan is not the only string to their bow. No doubt Russia has been inspired by its success in Syria, which has given it a new global security policy role. There is no reason to believe that Russia will engage militarily in Afghanistan: memories of the war during the 1980s are still alive. The question is whether Russia will really succeed in bringing about any change in the power politics over Afghanistan, or whether Russia is simply satisfied that the United States has failed in its involvement.

It is even more intriguing to follow China’s new interest in Afghanistan. Since 2001, the Chinese have been watch the situation closely, but have limited their involvement to the financial sphere, funding road-building projects and investing in mineral extraction. China has a close relationship with Pakistan, both countries describing their relationship as an “all-weather” partnership. China is increasing investment in Pakistan, seeing this as an acid test for its very ambitious Belt and Road Initiative, which will link China by sea and road to markets in the Middle East and Europe. To be successful, this initiative depend on political stability. In the past couple of years, China has shown a new willingness to exert pressure on Pakistan to involve itself in peace negotiations regarding Afghanistan. Globally, we see that the United States’ withdrawal in a number of areas is creating a vacuum that China is now entering. In Afghanistan – and in the surrounding regions – we see the same, in that China in changing its strategy from almost exclusively economic involvement to also playing a political and military role.

So the question is to what extent Afghanistan itself manages to play on these possibilities. One challenge is obviously a range of acute crises that have to be dealt with at home, including terror attacks and confrontations within the government alliance.

Another challenge is the basic analysis. President Ghani, and the circle around him, seem to be convinced that the main problem is Pakistan, Afghanistan’s neighbour to the south, and that the Taliban would not survive without it’s support. Pakistan is undoubtedly one problem, and must be part of the solution, but the resistance has its roots among Afghans, and within Afghanistan, and internationally the situation is about far more than Afghanistan’s relationship with Pakistan.

Accordingly, it is difficult to be very optimistic that we will see changes for the better in Afghanistan. But we will gradually come to see the signs of a completely new superpower game, which will affect the dynamics of both Afghanistan and the surrounding regions, and therein lies the seed of change.