In the war in Syria, the two globally most militarily active superpowers – Russia and the United States – have soldiers actively deployed on opposite sides on the same battlefield. This is the first time this has happened since the end of World War II, and it is a dangerous situation.

At the same time, we see that the Cold War “hotline” – a direct line of communication between Moscow and Washington – continues to function. This seems to have been vital during the Western military response, on 14 April, to the use of chemical weapons in Douma a week earlier, when Russia and the United States managed to prevent further escalation of conflict between them. 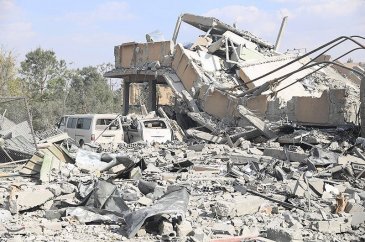 The ruins of the 2018 American-led bombing of Damascus and Homs. Photo: Tasnim News Agency / Wikimedia Commons

From a Norwegian vantage point this is important. The Syrian conflict is the greatest humanitarian catastrophe of our time. In itself, it is an extremely complex war involving a large number of parties, within Syria, from the region, and beyond. But a confrontation between Russia and the United States, given that each directly supports a different side in the conflict, could also have implications for Norway’s relationship with the superpowers and, in the final analysis, for Norway’s own security. Accordingly, it is good news for Norway that the mechanisms for preventing escalation continue to function.

There is little doubt that the missile strikes defied international law. None of the established justifications for a military attack on another country’s territory were in place. When the Norwegian government expresses its ‘understanding’ for the attack, without entering into further discussion of the international law implications to which one otherwise attaches such great importance, it is a reflection of a small state that feels increasingly vulnerable at the interface between a more aggressive Russia and a less predictable United States. The hotline between Moscow and Washington was established in 1963, while the Cold War was at its most intense. It was the year after the Cuban missile crisis, when the Soviet Union withdrew its medium-range missiles from the island, following complex secret negotiations between the two superpowers, against the background of American threats to deploy military force. Following the crisis, many people promoted the establishment of a “hotline” for clearing up misunderstandings and defusing security crises. One of the people inspiring the establishment of the hotline was the game theorist, strategist and Nobel Prize winner Thomas Schelling, who died at the age of 95 in December 2016. 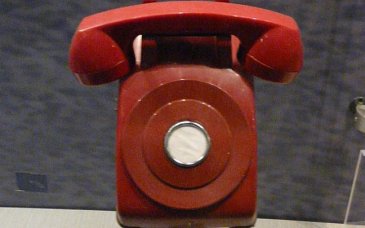 The hotline has often been portrayed as a direct telephone line, with a red telephone on the desk of each of the two presidents. In reality, the hotline was never a telephonic link. Communications had to be in writing and were decoded and translated by the recipient. A fact of interest to Norwegians is that the cryptographic equipment was supplied by the Norwegian company Standard Telefon og Kabelfabrikk.

There is much we do not know about the dialogue between the two superpowers in the run-up to the 14 April attack on the Syrian installations. Diplomatic efforts would not have been conducted via the hotline. Even so, the red telephones, which in actuality never existed, can serve as a metaphor for the channels that made dialogue possible. The American attack was relatively limited, and it was planned and implemented in a way that avoided impact on the Syrian regime’s supporters (Russia and Iran). The official reaction from Moscow was vociferous, but implicitly the Russians were clearly satisfied with the limited nature of the attack and had no wish to respond militarily.

In Washington this outcome was not a matter of course. Strong forces within the American government, including President Trump himself, were in favour of a more far-reaching response. The president is under investigation for possible collusion with Russia during his election campaign, and is under enormous pressure, which could easily lead both him and his advisers to think it especially important to display willingness to use a sledgehammer in all matters associated with Russia.

The planning of the missile strike took place alongside significant changes in Trump’s inner circle, with a new national security adviser in place and the nomination of a new secretary of state. Both the former holders of these offices, McMaster and Tillerson, were considered relatively moderate and advocates of trying diplomacy first, while the two incoming appointees, Bolton and Pompeo, are known to be confrontational and more willing to turn to military force. Observers in Washington point to the Secretary of Defense, James Mattis, as the advocate of a limited response in Syria and, more importantly, to securing Russia’s understanding through dialogue. This is how events turned out this time, but the outcome may of course be different at the next crossroads.

The American armed response was expected, but did not take place as quickly as many had feared. Time was taken to clarify expectations between the superpowers. At the same time, it would have been preferable to have taken even more time. The fact that the strikes came before the Syrian chemical attacks and the identities of the perpetrators had been independently documented is highly problematic, and would be so even if the strikes in themselves could be defended under international law. In an era when we are surrounded by alternative truths and fake news, it is more important than ever to obtain legitimacy by securing the most painstaking evidence. It is not enough, especially in Damascus, Moscow or Tehran, to say that we can trust the United States. And, with the interventions in Iraq and Libya relatively fresh in our memories, it is clear that there is little basis for such trust. Missile strikes without evidence set a dangerous precedent.

As far as the war in Syria is concerned, there is scarcely any good news in all of this. President Assad, who is responsible for inconceivable crimes against his own people, has now gained control of the most important strategic and economic regions of Syria, and the war is entering a new phase. IS has lost territorial control, but will in all likelihood continue to be a factor in the future. The other rebel groups will continue to fight, but have many disagreements amongst themselves. Tensions amongst regional powers are rising, and many of these tensions are also being played out on the battlefields in Syria.

All this provides considerable opportunities for misunderstandings, unwanted confrontations, and for situations where the parties see no alternative to actions that bring about further escalation. This is what makes it so important to learn from the existing space for dialogue; the space that the United States and Russia used to prevent anything much worse in the run-up to the American missile strikes. Let us hope that the superpowers succeed in maintaining this space, in expanding it, and that other powers will learn from this example.