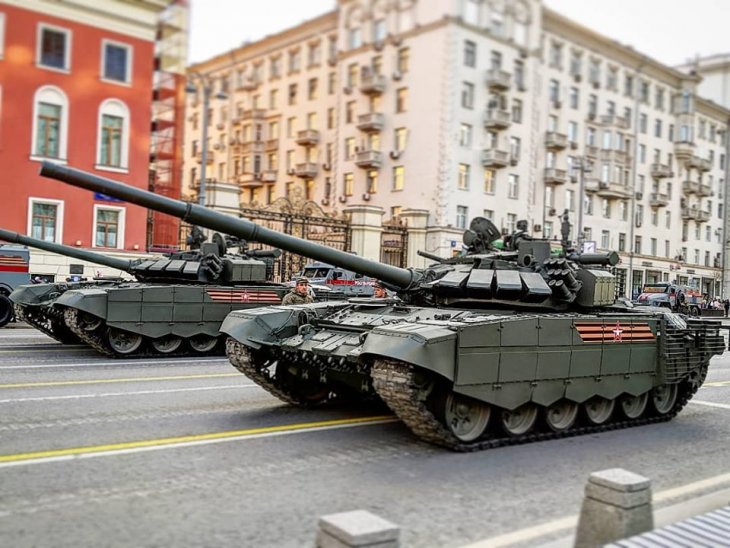 Moscow prepares for the parade.

Military force remains the instrument of choice in Russian policy-making, yet the expenditures on its building keeps going down. This paradoxical picture comes out of the recent estimate by our sister-institution Stockholm International Peace Research Institute (SIPRI), which is eagerly picked up by the Russian media. SIPRI methodology is long-established and respected by experts, but the assessment that demotes Russia to the sixth position in the world behind France appears to be not just counter-intuitive but plain wrong. This impression may be partly shaped by the assertive political rhetoric amplified by official propaganda and reinforced by many demonstrations, like the military parade that is going to roll over the Red Square in Moscow on the Victory Day celebrated on May 9. There is, nevertheless, much material evidence to doubt the 3.5 per cent reduction of military spending in 2018.

SIPRI doesn’t take the official data uncritically, but the best research efforts can correct the deliberate distortions produced by the main statistical agency Rosstat only so far. Every year, more and more parameters of the defense budget are made secret and denied even to the State Duma in violation of basic legislation. It is also clear that a direct re-calculation of expenditures from rubles into US dollars using the current exchange rate produces serious errors because the pricing mechanism in the Russian defense-industrial complex is obscure, so that the Armed Forces get new weapons for a price very different from what the foreign customers pay. In macro-economic estimates, the indicator of “purchasing power parity” is increasingly used for international comparisons, and a very rough (because of secrecy) application of this method to defense expenditures increases Russia’s total figure approximately thrice.

President Vladimir Putin excels at praising Russia’s military might and bragging about new technologically advanced weapon systems, such as the nuclear-propelled underwater vehicle Poseidon. He used the occasion of launching the nuclear submarine Belgorod (in construction since 1992), which is supposed to be the carrier of Poseidons, for supervising the laying of keels of four other combat ships. This ceremony cannot quite camouflage the deep problems in Russian shipbuilding, which struggles with orders for constructing the series of Yasen-class nuclear submarines and for repairs of the only aircraft carrier Admiral Kuznetsov and other Soviet-era cruisers.

Russian Navy has come out as a loser in the 2027 State Armament Program approved with delays only in early 2018 because the government insisted on cuts bitterly contested by various lobbies. Putin is wary about economic consequences and often claims that Russia will not repeat the Soviet blunder of channeling too much resources towards military needs and will pursue the arms race on the cheap. The economy is indeed stuck in a protracted recession and the discontent caused by the sustained decline of incomes and the increase of the retirement age is deepening. The growing public demand for social benefits brings greater political need to hide the real costs of militarization.

This “creative accounting” is particularly wide-spread in budgeting for the on-going “hybrid” applications of military force, which are often financed from special “money pools” filled by “voluntary” contributions from super-rich individuals. Costs of de-facto occupation of parts of Donetsk and Luhansk regions of Ukraine are certainly not included in the defense expenditures, and Putin took pains to explain that his decree on granting Russian citizenship to the population of this territories would not be that heavy for the Russian budget. The Syrian intervention is becoming increasingly unpopular, and state media only reluctantly informs about continuing attacks on Russian troops and bases. The deployment of Russian “advisers” and mercenaries in support of the Maduro regime in Venezuela is bluntly denied, and the state-owned Rosneft will probably have to cook its books for hiding the accumulating losses.

One feature in the complicated picture of money flows in the Russian military machine that is extremely difficult to calculate is corruption, which even in minimalistic official investigations reaches mind-boggling proportions. Scandals about hundreds of “dead souls” on the payrolls of military research institutes or fake research projects emerge from the veil of secrecy every month. Squabbles for shrinking funding are the main driver of these exposures, and the military structures are no different in this respect from other armed bureaucracies. Even in the all-powerful Federal Security Service (FSB), the head of the department supervising the financial sector was recently detained for bribery.

Financing of these structures is not included in the military expenditures, even if the Border Guard, subordinated to the FSB, is capable enough to capture three Ukrainian vessels in the international waters near the Kerch Straight last November. The main task of these forces is to ensure domestic security, and the brutal detention of liberal activists during the May 1 demonstration in St. Petersburg is supposed to demonstrate their readiness to protect the regime. Corruption goes hand in hand with this readiness, and the command of the heavily armed Rosgvardia wants to make the acquisitions secret, so that embezzlement would be better covered.

The sum total of money spent on strengthening, modernizing and corrupting various elements of Russian super-structure of militarism is probably not known even to Putin, who quite possibly doesn’t care to enquire. Some lobbies may suffer cuts, but the whole system appears perfectly sustainable, so that top generals keep building mansions in the Rublevka suburbia outside Moscow next to the dachas of “liberal” ministers. This waste of resources condemns Russia to degradation and losing ground in the global competition for redefining the world order, but these consequences are entirely acceptable for Putin’s court. Russia is not facing bankruptcy, and each new “wonder-weapon” appears to be affordable, but progressive militarization generates an interplay of external and domestic risks, which the Kremlin is ill-equipped to control.

A version of this text is published in Eurasia Daily Monitor.