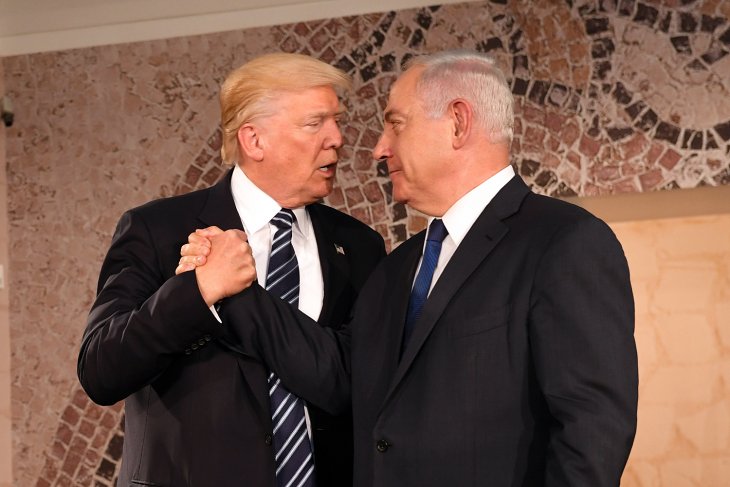 On Thursday President Trump made the unprecedented move to use a foreign power to punish domestic political actors. He tweeted that Israel should bar two congresswomen from entering the country. Prior to this tweet Prime Minister Netanyahu had decided that the congresswomen should be allowed to enter, but after the tweet he changed his mind. After the decision to deny them entry was made Israel approved Rashida Tlaib’s visit because she made a humanitarian appeal that she should be allowed to visit her grandmother – a Palestinian woman in her nineties living in the occupied West Bank. This was granted on the condition not to “promote boycotts against Israel” on the trip, conditions which she refused, saying “visiting my grandmother under these oppressive conditions stands against everything I believe in … It would kill a piece of me.”  Ilhan Omar is still barred from entering.

Israel’s decision to bar US congresswomen Rashida Tlaib and Ilhan Omar from entering the state is a culmination of three trends in both the United States and Israel: weakening of the bipartisan nature of the US-Israeli relationship; illiberal developments in Israel; and an increasing criticism of Israeli politics in the US mainstream. In the short run these developments are cause for concern as they stifle open debate about Israel. In the long run this could be a signpost in a process away from unconditional US support for Israel.

A move away from Israel as a bipartisan issue

Historically, support for Israel has been a deeply bipartisan issue in the United States. Going back to Truman’s (D) recognition of the state eleven minutes after it was declared up until Obama (D) granting the largest aid package to Israel in the history of the two states, at $38 billion over 10 years, there is a deep consistency in presidential support for Israel. Such support has been equaled in Congress. For instance, in 1995, long before President Trump recognized Jerusalem as Israel’s capitol, Congress passed a law binding the US to move the embassy to Jerusalem. The president had to postpone this move every six months until Trump declined to do so in 2017.

Under Benjamin Netanyahu’s leadership, however, Israel has increasingly supported the Republicans and undermined the Democrats. The clearest example of this was Prime Minister Netanyahu’s famous speech in the US Congress in 2015 in which he tried to undermine the US-Iran nuclear negotiations. The planning of the speech was closely coordinated between the Republican party and the Israel leadership without evening notifying the White House. Netanyahu’s vilification of Obama despite Obama granting Israel the $38 billion aid package is equally astounding.

Calling Israel a liberal democracy has long been problematic due to its policies towards the Palestinians under occupation.

The ongoing Trump-Netanyahu relationship has been massively beneficial to Netanyahu. Netanyahu gained US support for its position on Jerusalem as Israel’s undivided capital in 2017, the Golan Heights was recognized as part of Israel in 2019 and the status of the West Bank as “occupied territory” was removed from the State Department’s annual report in 2018. All three of these changes undermine the two-state solution which has been the basis for the US position on the Israeli-Palestinian conflict.

An anti-liberal turn in Israeli politics

Calling Israel a liberal democracy has long been problematic due to its policies towards the Palestinians under occupation. The Israeli government has enacted a series of laws and policies over the last few years making it increasingly less liberal also within its actual borders. The most well-known example is the Jewish Nation State law from 2018 which deepens the Jewish character of the state, thus weakening the rights of non-Jews (approximately 20 % of the population). Other examples include limitation on use of critical material in education, and tighter control on NGOs. Netanyahu has thus far been unable to pass a law granting himself immunity from persecution but depending on how the upcoming Israeli elections go such a law may be around the corner.

For this specific case the most relevant example of an illiberal turn is a 2017 law which allows the state to deny entry for supporters of the BDS (Boycott, Divestment, Sanctions) movement. It was this law that was used to bar entry for Omar and Tlaib.

For populists such as Trump neither long-term thinking nor such ironies matter. Politics is about firing up the base and attacking opponents. For this purpose, Tlaib and Omar are perfect targets.

A mainstreaming of leftist criticism of Israel in the US

Rashida Tlaib and Ilhan Omar might be the most vocal critics of Israel within the US congress, but they are not alone. Rising star in the Democratic party Alexandria Ocasio-Cortez is obviously worth mentioning here. Taken together these three represent the young, vibrant and radical wing of the party. Were it only them this could be seen as a fringe issue on the left. While there is nothing to indicate that the majority of Democrats are going to support sanctions against Israel at any point in the future there are clear indications that open critique of Israel is becoming far more mainstream. It might be no surprise that the most leftwing Democratic presidential frontrunners, Elizabeth Warren and Bernie Sanders, have been critical of Israel, but also far more moderate Pete Buttigieg has stated that if Israel annexes the West Bank then he would end US aid to Israel.

President Trump first asked congresswoman Rashida Tlaib, of Palestinian descent, to “go back” to her home country and then demanded that Israel should refuse her entry.

The rise of pro-Israel but anti-occupation groups such as IfNotNow and JStreet represent an increasing push for ending the Israeli occupation of the Palestinian territories from US civil society. While these groups in no way can compare to AIPAC in terms of size and influence they show that there is a growing counter-structure to the established pro-Israeli organizations.

While Israel already had a law in place allowing the state to bar entry to the congresswomen based on their political views, Israel had initially stated that they would be permitted to enter. In the end it was Trump who pressured Netanyahu into denying the congresswomen entry. For Trump this was clearly domestic politics. For Netanyahu this was a way to please his benefactor. As long as both Trump and Netanyahu remain in office this might be good for the US-Israeli relationship. In the long term, however, this is damaging to the same relationship. It is for this very reason that criticism of Israel’s decision came from the largest pro-Israeli lobby group, AIPAC.

There is also a deep irony here that is worth mentioning: President Trump first asked congresswoman Rashida Tlaib, of Palestinian descent, to “go back” to her home country and then demanded that Israel should refuse her entry. It should be needless to say that these are contradictory calls.

For populists such as Trump neither long-term thinking nor such ironies matter. Politics is about firing up the base and attacking opponents. For this purpose, Tlaib and Omar are perfect targets.