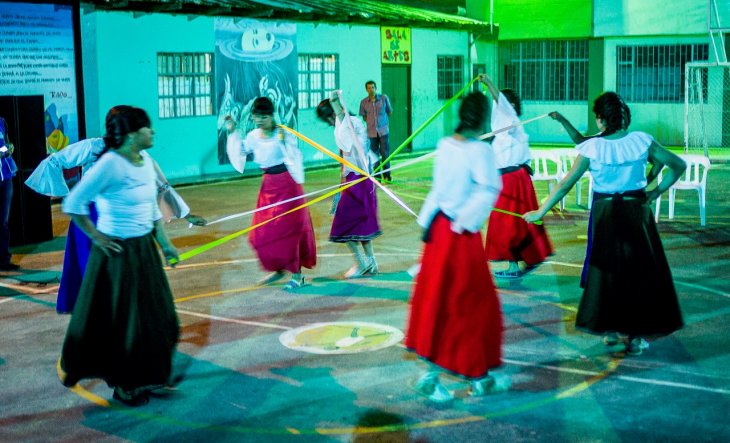 Conflict-ridden societies, including –counterintuitively– those that have recently overcome violent conflict through a political settlement, are fraught with mistrust, polarisation, and resistance to change. The implementation of peace agreements is often the new arena where tension and controversy manifest themselves.

In Colombia, for example, the recent peace deal has not evolved into a vision
uniting Colombians around a common path towards a better future, but instead into one of the main cleavages amplifying polarisation and fragmentation in the country.

Against this backdrop, the Kroc Institute for International Peace Studies, with the Barometer Initiative , is monitoring and technically supporting the implementation of the peace agreement at the request of the Government and the Revolutionary Armed Forces of Colombia – People’s Army (FARC-EP), the strongest guerrilla movement in the country before its disarmament in mid-2017. The peace deal signatories requested Kroc develop an independent scholarly methodology for identifying advances, difficulties, gaps and concerns in real time, and to provide this information to the national and international monitoring and verification committees. They also invited Kroc to support, through its monitoring efforts, the continuous improvement of peacebuilding capacities in the country alongside implementation.

As a peacebuilding actor, the Kroc Institute has sought to move attention away from the divisive finger-pointing game that characterises the political context in Colombia into a richer more cooperative and evidence-based conversation

While doing this work in Colombia, several actors, including the peace agreement signatories, have on several occasions requested that Kroc differentiate between what the government has done and what FARP-EP has done to implement the accord, a request that if accommodated could be used by one side to criticise the other for not complying with the accord. Kroc has always resisted these calls because making judgment was not part of the original mandate for the monitoring effort, and it could have been used by either party, or by society, to accuse Kroc of being partial and, therefore, irrelevant.

As a peacebuilding actor, the Kroc Institute has sought to move attention away from the divisive finger-pointing game that characterises the political context in Colombia into a richer more cooperative and evidence-based conversation about how to constructively navigate the challenges of the post-agreement phase of the peace process.

In a context of extreme combative polarisation around peace, as is the case in Colombia, how has Kroc created a political space in which to present its monitoring work without itself becoming a factor of division and exclusion and getting entrapped in the noisy contentious narratives currently splitting Colombia on the peace process?

How has Kroc tried to incentivise key Colombian stakeholders to focus on constructive conversations about how to advance the implementation process rather than focusing on blaming others for things that are not working?

Hybrid approach: monitoring the agreement and promoting peacebuilding through a dialogic approach

To face the challenges described above, the Kroc team decided to combine its scholarly expertise with a dialogic peacebuilding-oriented approach . The Barometer Initiative has developed two intertwined lines of work.

The first uses an academic method to rigorously measure implementation. Through an accumulative iterative process, a team of peacebuilders and scholars collect, validate, analyse and code hundreds of pieces of information from a diverse plurality of sources .

Kroc regularly monitors progress in the implementation of 578 measurable and observable commitments included in the peace accord. These commitments were clustered into a matrix of 18 themes and 70 sub-themes to facilitate the continuous quantitative and qualitative analysis. In addition, Kroc has analysed the concrete commitments included in the peace accord related to gender, ethnicity and local peacebuilding. Using this empirical evidence, Kroc engages with top decision makers and other strategic platforms of stakeholders – opinion makers, journalists, academics, members of congress, representatives of the international community and civil society, among others – with regular updates about the implementation process. The reports identify advances, difficulties, gaps, delays, concerns, bottlenecks and early alerts of renewed violence. They also present comparative analysis about other peace processes, and how other countries have dealt with similar dilemmas, tensions and difficulties. The theory of change that informs Kroc’s work is that timely evidence-based information on the progress and challenges of implementation, with comparative information from other countries, helps to focus commitment on the process, encourage action to achieve implementation and navigate the post-agreement complexity, and constructively address emerging challenges and road- blocks.

Kroc officials have presented these reports to key decision makers in formal top-level committees tasked with monitoring the implementation, and in more than 100 follow-up meetings with senior staff of the government, as well as many others among the international community and civil society representatives. In addition, in 2019, Kroc is preparing five regional reports to analyse implementation at the local level; a fourth comprehensive report on all of the peace agreement stipulations; a second report looking more specifically at those stipulations with a focus on gender; and an additional one looking at progress in implementation of commitments related to ethnicity.

trust and relationship building, strategic weaving and networking, and participative and inclusive analysis have complemented the dynamic to promote a more meaningful process.

The second dimension of the Barometer Initiative is the dialogic approach. Kroc has complemented its scholarly workflow with a collaborative process with many actors. When designing the Barometer Initiative, the Kroc leadership decided to select in Colombia a multidisciplinary team of skilled dialogue and trust-building practitioners with academic and policy backgrounds, motivating them to go beyond technical desk-based academic work, and make use of their peacebuilding skills. Since 2016, the team has regularly organised and sustained formal and informal spaces such us meetings, focal groups or coffee conversations fostering collaboration and joint analysis with hundreds of Colombian actors at different levels of society (national and local) and with different decision-making responsibilities. Some of these dialogic spaces are more formal: a set of facilitated events where people come together in a safe space, develop a common understanding about the peace process through honest conversation and listening, and identify options to address bottlenecks. Many of them are informal, focusing on sharing information, conversing about the value of the accord’s implementation as a way to meet social and political needs, and fostering creativity to face impasses and implementation problems. Kroc’s team has promoted, facilitated or participated in these spaces providing the empirical evidence coming from its monitoring work. The spaces have been fundamental in providing context and quality to the monitoring process, facilitating participatory conflict- and peace-oriented analysis, and building trust, commitment and relation- ships among different stakeholders that are important to develop ways to respond to the peace process bottlenecks.

As an example, Kroc is facilitating the process to monitor the distinctive stipulations within the peace agreement with gender and ethnic components, respectively. The initiative has been collaborative with the participation of women and ethnic platforms and other key stake-holders interested in monitoring and evaluating the implementation using these distinctive lenses. The Institute has shared its methodology and exchanged data and analysis with these groups. This has been done through regular dialogue events and advocacy meetings with other key actors where the participants, including Kroc, have benefitted from the rich quantitative and comparative assessments on the progress of implementation, and have promoted joint participatory analysis qualifying it, providing context to the assessments and identifying common recommendations.

An additional example is the process to monitor the peace agreement implementation at the local level. With a team of ten professionals based in ten regions, the monitoring has involved the organisation of regular formal and informal dialogue spaces at the local level, with the participation of hundreds of community members. This process allows for the co-creation of knowledge with local actors, with the aim to feed it into Kroc’s academic workflow, making the analysis more inclusive and legitimate. Everyday and local understandings of the peace process status have complemented the quantitative and comparative assessments creating a much richer picture of the peacebuilding dynamic. This distinctive bottom-up analysis has indeed enriched the meetings with key decision makers, and enhanced the legitimacy and power of the information provided.

Reductionist rhetoric, and black-and-white accounts of the peace process are still pervasive in Colombia. However, as Kroc’s experience indicates, it is possible to facilitate and mediate political spaces not driven by schism, where the focus is on fact-based and forward- reaching constructive conversations. Dialogue events have been part of the equation. But trust and relationship building, strategic weaving and networking, and participative and inclusive analysis have complemented the dynamic to promote a more meaningful process.

A dialogic approach has forged quality interactions among key stake- holders, and has provided a more transformative platform to sustaining peace in Colombia and supporting its war-to-peace transition.