Lebanon’s protests have brought the country to a pivotal moment. It’s now paramount we act carefully and with the lessons from the past in mind. 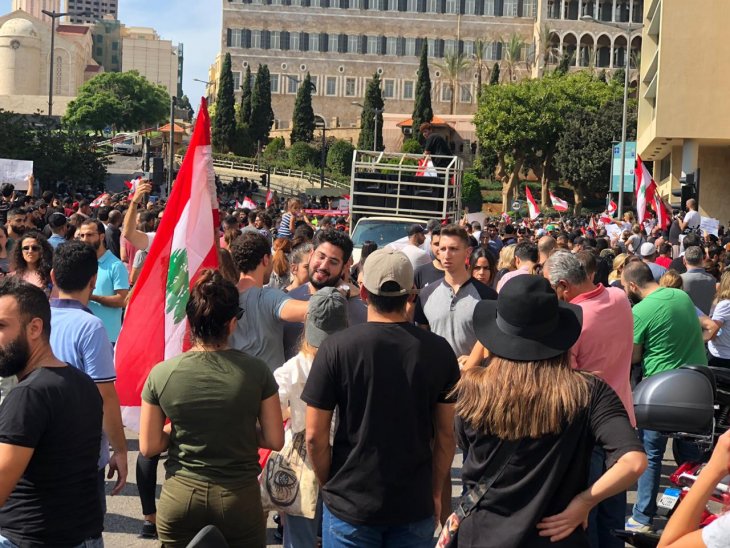 This piece originally appeared online in The New Arab. In the week since then the situation has continued to rapidly evolve. We will publish a new piece from Carmen Geha in the coming days about the situation on the ground in Lebanon.

Today marks the ninth day of the unprecedented citizen-led uprising against the ruling elite and their policies in Lebanon. As I sit down to write, I can hardly believe it myself. So much has happened in just nine days, and much of it is telling of what could come next.

And yet, even as I experience this exuberant uprising with disbelief, I am very aware that it has been a long-time coming, and also that this is not our first rodeo.

We have tried uprisings and revolts before. In 2005 for example, Lebanese protesters demonstrated against the Syrian regime, and in 2015 against the garbage crisis. But this time things are very different. So far, we’ve managed to stay united, determined, and hopeful, even as they try to shut us down every day.

How did we get here?

This movement is essentially about bad politics, and bad politicians, with the dire socio-economic situation acting as one of the biggest drivers. The deteriorating quality of life in Lebanon is the direct result of a reality crafted by politicians in the 30 years following Lebanon’s civil war.

After 17 years of conflict ended in 1989, the then-warlords devised a convoluted power-sharing system that guarantees their own representation based on religious sect, and essentially prohibits any reconciliation process, by granting themselves amnesty for war crimes.

These warlords-turned-politicians took to the business of rebuilding Lebanon’s state through largely neoliberal policies that made the poor poorer and the rich richer. They also designed an electoral framework that ensures their parties win the most seats, and gerrymandered voter districts to ensure a majority of each sect in each district.

This time the uprising is gendered. Women have been crucial in leading chants and organising sit-ins.

The post-war politicians also enshrined networks of clientelism giving out services here and there in return for loyalty at the ballot box. The ‘zu’ama’ get their self-proclaimed legitimacy from their bedfellows and religious leaders who control religious courts and prevent any form of a civil status code for citizens.

The people’s relationship with the state is mitigated through the sectarian parties and sectarian courts. So for instance, women’s rights to custody and inheritance differs depending on the sect they belong to. There is effectively no such thing as a Lebanese citizen, only subjects of sect and leader.

It should come as no surprise, that politicians oppress freedom of speech and control freedom of assembly. Rampant corruption in all sectors including electricity, water, transportation, and even the garbage has made our life unbearable.

Add to that inflation and widespread unemployment, it’s no wonder people are on the streets cursing their political leaders and blaming them for the situation we find ourselves in today.

But things are visibly and meaningfully different this time. People are speaking out against the post-war politics.

Connecting bad policies directly to politicians means literally removing the cloak of security and risking your life. It means that poor people may return to their homes, and find even worse conditions. It means the unemployed may be blocked from future opportunities for speaking out against their leaders and the system that keeps returning the same leadership to power.

Also, this time the uprising is gendered. Women have been crucial in leading chants and organising sit-ins. Our current political class, through sectarianism and clientelism is essentially a patriarchal enterprise.

Its policies and performance make women the most vulnerable to laws and practices that govern their private lives, their bodies, and their public participation. Seeing women take the lead and place their issues at the frontline of the protests means that there can be no going back to silencing us.

Lastly, the rapid spread of protests and spontaneous decentralisation is historic. They are happening in areas that politicians historically considered their own backyard.

Solidarity from Tripoli to Jal el Dib to Nabatiyeh has been overwhelming and unbending. People have been consistently and courageously challenging stereotypes and uniting in their calls for holding this political class accountable for decades of oppression and impoverishment.

The longer we can stay organic, peaceful, and leaderless, the more we stand to gain. Personifying the protestors could make crushing us easy and swift.

Some words of advice

For some of us, however, this is not our first time on the streets, and some words of caution are perhaps timely.

First, we must avoid falling into the trap of expecting quick solutions and easily-packaged demands. The system is complex and it is not headed by one dictator who can simply step down. Calls for early elections will divide the streets and will fail to bring legitimacy to new faces and new solutions.

Instead, the longer we can stay organic, peaceful, and leaderless, the more we stand to gain. Personifying the protestors could make crushing us easy and swift.

Second, we need to keep up the pressure through our actions on the streets. This does not mean that strikes should go on indefinitely or forever. But it means being creative and persistent in our protest against politicians. Weekly sit-ins across the nation, or specific hours to strike could be effective. Maintaining our presence in public spaces is paramount.

Third, we need to organise in an inclusive way. We must avoid a repeat of the 2018 elections, when supposedly reformist people ended up running against each other, with minimal women’s representation.

For this, multiple layers of organisation are necessary: by region, by profession, and by issue. We can organise dialogue circles across these sectors on the shape of the political transition, or on gender-related reforms. This must not be a top-down process led only by experts and NGOs, it needs to be citizen-led.

We pray together, eat together, and dream together. We have managed to do in nine days what 30 years of post-war non-reconciliation failed to do.

Lebanon should look to South Africa after apartheid, when hundreds of thousands participated in a public reconciliation process and in the drafting of a new constitution.

The recent Sudanese example can also serve as a source of inspiration, where unions provided the voice and platform for workers, young men and women, to express their demands for change and participate in reforming the country’s constitutional and legal system.

Over the course of nine days, the prime minister and the president have tried to contain the protests. Security forces have beaten up citizens, injuring and arresting dozens of people.

Political parties have sent their supporters to sabotage tents and co-opt demands. The pro-system media has tried to discredit the protestors calling us violent traitors. It has also started raining heavily.

All this has not curbed people’s enthusiasm.

We pray together, eat together, and dream together.

We have managed to do in nine days what 30 years of post-war non-reconciliation failed to do. Real and meaningful change has already happened on the streets in nine days. How we institutionalise it is completely up to us, and this time I will put everything I can into getting it right.