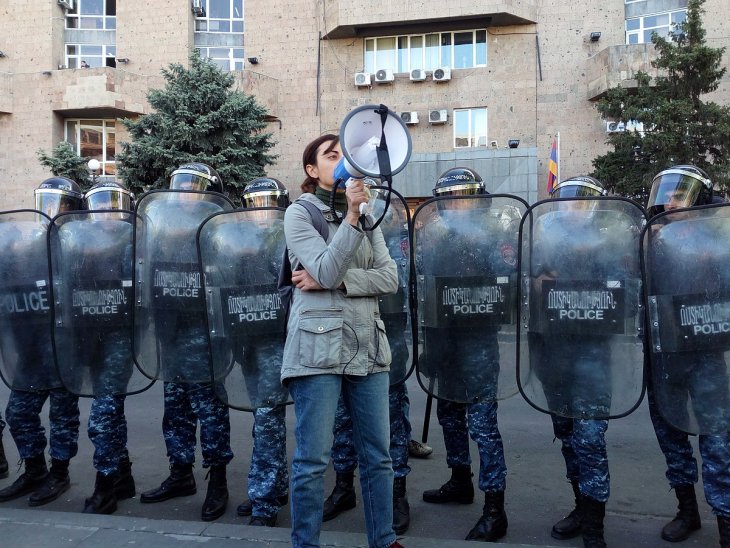 A scene from the 2018 Armenian Velvet Revolution. Photo: Albergo via Wikimedia Commons

In these anxious days, it doesn’t necessarily take a flight of imagination to envisage some consequences of the still-expanding COVID-19 pandemic. The societies that had experienced turmoil before the outbreak of the coronavirus crisis will quite probably experience a re-energized surge of protests temporarily subdued by the health concerns. The unfolding economic recession is set to aggravate the preexisting tensions, so unstable governments will face heavy odds. Russia is sinking into an ugly crisis but can try to forestall and deter the threat of revolutions.

It is in the Middle East that this pressure could manifest itself with particular force. Indeed, Lebanon saw angry street protests at the start of the year, and its sovereign default adds more fuel to the smoldering unrest. Iran, where economic crisis could reach devastating proportions, has accumulated a vast potential of discontent focused on the bad mishandling of the extra-severe epidemic. Already by the end of the year, this conflict-rich region can experience a wave of uprisings similar to the memorable “Arab Spring” of early 2011.

One region standing to receive an indirect impact from this wave is the Black Sea area, which has a rich track record of “color revolutions”, starting with the Georgian “Rose Revolution” in late 2003 and including the Armenian “Velvet Revolution” in spring 2018. While the pandemic spares so far the states of the region, with the possible exception of Turkey, recession will hit badly their fragile economies. The external power that could react forcefully to the challenge of new revolutions is Russia, which suffered a humiliating setback attempting to undercut the “Orange Revolution” in Ukraine in late 2004 and launched an armed aggression against this state after the “Euromaidan” revolution in February 2014.

The “war” against the coronavirus is badly mismanaged because in the critical initial stage, political attention was focused elsewhere – on revising the Constitution in order to grant Putin the right to claim another presidential term.

The Russian leadership reacted incoherently to the arrival of the “Arab Spring”, granting NATO a green light for the intervention in Libya and then condemning the “mission creep”. What alarmed and agitated the Kremlin was the unexpected explosion of street protests in Moscow in late 2011, which had nothing to do with the turmoil in the Middle East, but was perceived by the court of Vladimir Putin, who opted to reclaim the presidential power, as the spread of chaos, allegedly sponsored and manipulated by the West. Putin assumed the role of champion of the counter-revolutionary cause, and the military intervention into the Syrian civil war launched in September 2015 was conceptualized as a decisive move aimed at turning back the tide of revolutions.

Significant success achieved by this high-risk experiment with projecting military power by the end of 2017, convinced the Kremlin that the threat of West-incited turmoil was contained, and the specter of revolution was effectively exorcised. Russia responded, therefore, with uncharacteristic indifference to the explosion of street protests in Armenia in spring 2018, though a key reason behind that aloofness was most probably preoccupation with Putin’s re-election as well as with preparations for the 2018 World Cup. Moscow also shrugged off the public uprising in late 2019 against the puppet-president Raul Khadzhimba in the quasi-independent Abkhazia, which it perceives as unruly but unimportant possession. Russia’s reaction to possible new explosions of unrest in its Black Sea neighborhood this autumn and later could, however, be very different and much more forceful.

The domestic situation in Russia itself might become a major driver of a new offensive against revolutions. The “war” against the coronavirus is badly mismanaged because in the critical initial stage, political attention was focused elsewhere – on revising the Constitution in order to grant Putin the right to claim another presidential term. The government is loath to spend the accumulated financial reserves in order to provide support to small business and boost the economy. Putin’s reluctance to take responsibility for leading the country in the time of troubles brings insightful analysts to the conclusion on uselessness of the over-concentration of power in the Kremlin. Already in the near future, the regime can face the urgent tasks of re-directing the accumulating discontent and restoring Putin’s compromised authority.

An attempt to preempt and defeat the specter of revolution might appear to the Kremlin to be a rational choice, but a probable setback with such attempt could bring Russia yet again to the brink of a catastrophic implosion.

One additional incentive for a pro-active counter-revolutionary move might arise in Syria, where ceasefires in Idlib and Qamishli are still holding, but the situation in the refugee camps is grim. Iran is hit so badly by the epidemic and its economy is so damaged by sanctions and the fall of oil prices that its capacity for supporting the al-Assad regime is greatly diminished. Russia cannot take on the role of the main sponsor of the Syrian army and has to deal with the growing risks of marauding by various pro-Iranian militia, in the absence of such a tough controller as General Qasem Soleimani. Moscow might have to withdraw its forces from Syria for real and covering this setback with a new pro-active move can appear a rational choice.

Ukraine remains the key focus of Russia’s strategic attention, and the squabbles in President Volodymyr Zelensky’s inexperienced team are keenly monitored. A new aggressive move on this theatre could, nevertheless, require a mobilization of resources on a scale too heavy for the weakened Russian economy. Georgia presents an easier target, and the deep economic contraction turns the traditional political disarray into a pre-revolutionary situation. A swift amphibious operation capturing indefensible Georgian provinces along the Black Sea coast can be designed by the General Staff as entirely feasible and approved by the Kremlin as an easy victory. Russia is strengthening its military grouping in Abkhazia, and the spring draft into the Russian army is proceeding no matter the epidemic.

What encourages the counter-revolutionary strategizing in Moscow is the assessment that NATO containment capabilities are undercut by the over-reaction to the COVID-19 crisis, and the cancellation of all military exercises planned for this summer is seen as a clear evidence of that. Russia is also peddling opinions about deep discord in the EU caused by the lack of solidarity in the struggle against the coronavirus, and the Kremlin can fall victim to its own propaganda. Miscalculations and over-reaction could drive a new Russian offensive against Ukraine, but it is the defenseless Georgia that shapes up as a target of choice. Fears of the existential threat to autocratic regime from the sudden rise of revolutionary energy and over-estimation of own military potency come together to shape volatile and dangerous decision-making. An attempt to preempt and defeat the specter of revolution might appear to the Kremlin to be a rational choice, but a probable setback with such attempt could bring Russia yet again to the brink of a catastrophic implosion.

A version of this piece originally appeared on the website of the Italian Institute for International Political Studies. You can find it here.