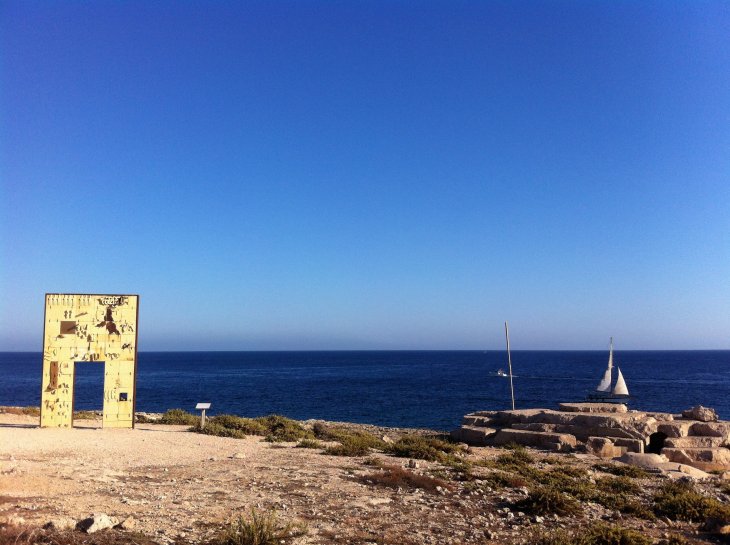 “Gate to Lampedusa – Gate to Europe.” A monument dedicated the migrants lost at sea, by Mimmo Paladino. Photo by Vito Manzari, 2014. Wikimedia Commons.

How can colonial history help us to understand and explain the present European approach to migration across the Mediterranean?

Today, we increasingly see the European Union (EU) attempting to move border controls and migration management beyond the Mediterranean and into countries along the coast of North Africa and Asia Minor. The return of migrants intercepted and rescued at sea to a network of EU-financed migrant detention centers in countries like Turkey and Libya is quickly becoming the desired norm from a European perspective. My research focuses on the latter case of Libya, where Italy is spearheading these policies. Beyond the relationship between Italy and Libya, their shared colonial history and its importance for migration policies in the Mediterranean challenge common assumptions of the EU as a counter-institution to the previous colonial projects of its member states.

In my master’s thesis I explored Italo-Libyan colonial history going back to the Italian conquest of Libya from the Ottoman Empire, forcibly drawing the area into Italy’s political and social orbit and setting the stage for a later imbalanced relationship. The two economies of Italy and Libya were tied to each other through joint oil extraction in the post-war era. A more restrictive Italian migration regime came about in the 1980s and 1990s, both as a result of domestic political changes and the demands to strengthen border security in order to join the Schengen system. The late 1990s and 2000s subsequently brought a series of treaties between Libya on the one side and Italy on the other (supported by the EU). These agreements connected the colonial past with promises of increased economic collaboration and political acknowledgement, in return for Libya taking on the role as Europe’s gatekeeper. With my research I connected these different time periods in order to address a lacking acknowledgment of the importance of long-term colonial continuity, missing from most writing on European migration policy in the Mediterranean both within academia and in the media.

The time period investigated runs from the beginning of Italian conquest and colonization of Libya in 1911, up to the Valletta Memorandum of February 2nd, 2017 between Italy (its initiatives in turn partially financially subsidized by the EU) and the Libyan Government of National Accord (GNA). The memorandum is a key document dealing with the channeling of immigration into the EU, as well as what the parties can jointly do to control and stem this movement of people.

In my research I identified several occurrences of colonial continuity. This continuity can be broken down into a continuity of interests, colonial infrastructure, continuity in terms of the companies and personnel involved, as well as continuity in how certain aspects of colonial attitudes and management were retained. Of the interests mentioned, the Italo-Libyan oil industry is the most important one. Search for potential petroleum riches began while Libya was still a colony, then started anew after The Second World War (WWII) with essentially the same Italian companies (albeit under different names) doing the prospecting. As more interests have come into play, they have also been intimately tied to the preexisting ones. The best and most relevant example of this is migration, which as it grew to be an important issue for both Libya and Italy was increasingly mentioned alongside economic ties and a shared colonial heritage. Here the preceding colonial history functioned as a foundation for the bargaining deal tying these economic relations to increased migration management externalization.

The colonial infrastructure was also inherited and repurposed to serve new goals, first helping oil petroleum pioneers reach poorly accessible areas to prospect as well as later giving the autocrat Gaddafi the opportunity to better control his own population and police migrant groups making their way to the Mediterranean. The latter to fulfill the requirements of agreements with Italy and the EU on curbing and controlling migrant movement, mentioned above. Regarding the continuity of colonial attitudes and management, the reappearance of camps in Cyrenaica, eastern Libya is noteworthy. Whereas in the 1930s these consisted of internment camps housing the entire Libyan civil population in a harsh and indiscriminate attempt to end armed opposition to Italian rule, the current detention centers house African migrants from a range of countries south of the Sahara. While the present center system has been criticized by humanitarian organizations for its precarious conditions, there is no comparison with the levels of cruelty or mortality rates exhibited in the colonial internment camps. Nor is making such a comparison my point. It is, however, worth mentioning that while colonial history makes several reappearances in treaties, memoranda and agreements when needed as an enabler for realpolitik and the political demands and desires of Libya, Italy and the EU, it is conspicuous in its complete absence from official documents and discussions on what funding and constructing a new system to detain and hold people in Libya means from a historical perspective.

The continued presence and importance of the Italo-Libyan colonial history became an essential part of my focus as I researched. We often view current affairs in an unreflective way, not taking into account that our viewpoint itself is shaped by historical trajectories, societal contexts and past political frameworks. In this, colonial relationships between former colonial powers and colonized states are often central.

There has obviously also been a great deal of change in the past century that needs to be accounted for: the end of Italian colonial control over Libya in WWII, Muammar Gaddafi’s takeover of power in 1969, the expulsion of former Italian colonists and most foreign oil companies in the 1970s, Libya’s increasingly rogue status in an international context in the 1980s, the beginnings of a strengthening and securitization of European borders in the 1990s and the fall of Gaddafi and subsequent Libyan descent into civil war coming in 2011; these were all points in time that brought immense change and upheaval. Yet through all of these instances, Italo-Libyan relations have held firm and grown in importance. For a long time they were chiefly economic in nature, but increasingly this has been tied in with migration management externalization duties. All through the 1990s up until the present, a range of Italian governments of all political stripes, and irrespective of who their Libyan counterparts were and what kind of state Libya was in, have kept on constructing a framework of agreements to enlist their former colony in the work of policing Europe’s border. With the 2017 Valletta Memorandum the EU implicitly backed Italy in these attempts, most likely with wide-ranging consequences for the future of Mediterranean migration management.

colonial history is still informing policy and lying foundations for current European migration management, even if it is not openly acknowledged.

The reigning understanding and self-image of the European Union is as a postwar alternative to these imperial ambitions, meant to mark an end to nationalist and oppressive traditions in the name of increased European integration after 1945, and thus inherently post-colonial in nature. That individual European countries have a long colonial afterlife and imbalanced relationships with their former colonial holdings might not come as a surprise to most observers. Indeed, all my interview subjects, two field workers employed an Italian humanitarian NGO active in Libya and one Italian freelance journalist based in the Libyan capital Tripoli (names withheld upon request), mentioned “neo-colonialism” when describing Italy’s involvement in Libya during our conversations, unprompted.

While this is interesting in and of itself, I do not think Italo-Libyan relations can be reduced to that label. Instead I turn to the work of social scientists Peo Hansen and Stefan Jonsson, who have argued convincingly for a reinterpretation of the beginnings of the EU, claiming that “… the process of European integration was intimately tied to colonialism,” despite the reigning interpretation that the EU has “… an almost immaculate historical origin and purpose, far removed from the ugly imperial and national worlds of power politics and crude interest maximization.” My work moves beyond this colonial origin story and its role in European integration in the 1950s, to show that colonial history is still informing policy and lying foundations for current European migration management, even if it is not openly acknowledged. This fact alone should be cause for concern and frank discussions on how we confront that history and its lingering influence.