I felt like I had defeated the dictators when I walked out of Yangon’s Mingeladon airport for the first time, more than 20 years ago. Unnoticed, I had sneaked out of the queue and avoided the mandatory exchange of three new, unfolded, and spotless 100-dollar bills into the FEC monopoly money that the Myanmar military regime made foreigners use. Before arrival, I had gone many rounds with myself considering the ethical dilemma of visiting Burma, or Myanmar, under the repressive regime of the generals. I had seen the leaflets and posters all over Northern Thailand, asking tourists not to go. I knew about the brutal crackdown of the student uprising ten years earlier. I knew about the civil wars, the humanitarian suffering, and about Aung San Su Kyi in house arrest. Yet, I decided to go. I had to see for myself. 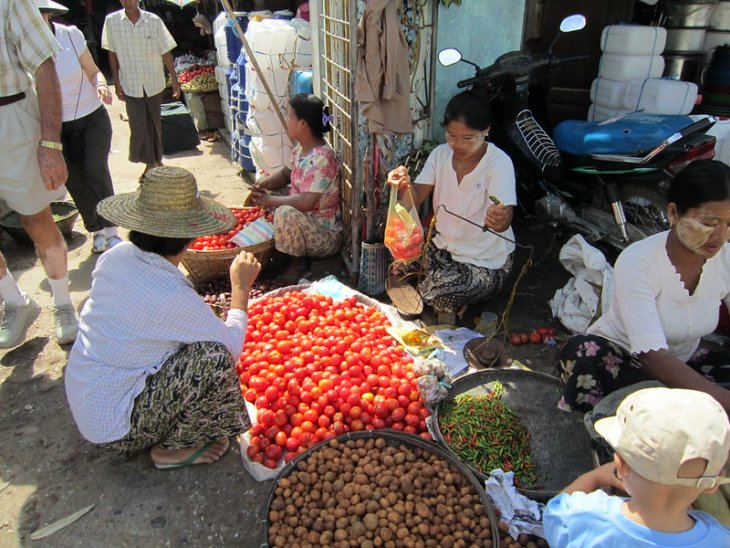 Women in a market in Myanmar. Photo: eGuide Travel CC BY

Myanmar was something else. The tea leaf salads, the Shan noodles, the cheroot cigars, the green tea and the palm sugar jaggery. Getting conned by black market money changers down at Sule Pagoda. Listening to cheesy Burmese love songs to the tunes of Metallica in coffee shops serving black coffee with lime. The blasting karaoke on overnight buses. Getting lectured, in secrecy, by school teachers and tour guides about politics and about the radio that was broadcasting from my home town in Oslo. The strange feeling of normality interrupted by the large red billboards in white writing with propaganda from the military regime, reminding me about the repression and the hardship.

Returning to Myanmar 14 years later, it was like arriving to a different country. T-shirts and shoulder bags featuring the Lady were sold openly on the streets. A booming civil society and people speaking freely about politics, about the war and the suffering, and about the peace process. Dissidents returning from exile. In October 2012, together with our local partner, PRIO organized an academic conference about democratization and peace in Myanmar – the first of its kind in many decades. Myanmar was opening up, but international actors were engaging in heated arguments and disputes about the reliability of the reforms and the sincerity of the generals.

Building up since the response to Cyclone Nargis in 2008, the politics of aid to Myanmar was reaching a peak of tension. Anyone providing humanitarian relief for people in Myanmar would have to consider the political implications of their approach and be prepared to be met by harsh criticism for their stance. Were any operations dealing with the illegitimate regime in Naypyidaw consequently undermining the struggle for democracy and minority rights, or were such concerns trumped by the humanitarian imperative of providing assistance wherever it is needed?

Was it more effective to pressure the military with isolation and international sanctions, or did these sanctions only hurt the people of Myanmar? Could support to civil society groups inside Myanmar lead to a transformation of Myanmar society and to political changes in the long run, or would this strategy only benefit existing elites with close links to the regime? These were the kind of questions that characterized the heated debate. The different positions were strongly held by the various aid providers and advocacy groups, and they were based on competing theories of change.

In the first years of the transition since 2011, I followed closely the work and the different approaches of the three Norwegian organizations with the largest operations in Myanmar and along the Thai-Myanmar border – The Norwegian Refugee Council (NRC), the Norwegian People’s Aid (NPA) and the Norwegian Church Aid (NCA).

Norway had become an engine in the international shift from sanctions and isolation to engagement, and initiated a number of humanitarian programs inside Myanmar to support the peace process and the reforms. While some of these initiatives were operated by NRC and NPA, NCA expressed concern against the initiatives and feared that they would be implemented at the expense of support to refugees on the Thai-Myanmar border. In 2017 I visited some of the key humanitarian projects of these three Norwegian organizations in Myanmar and along the border, and I conducted interviews with staff, partner organizations and aid recipients.

In my study I found that these three organizations exhibited characteristics from three competing humanitarian approaches that are commonly found among aid providers in Myanmar. While NRC strived to operate with a neutral approach aiming to secure humanitarian principles without pursuing any other political agenda, NPA cultivated a more pragmatic approach aiming to work with the government to open up space for local organizations.

This approach was the result of a clear political thinking that the humanitarian suffering can only be stopped through a transformation of the Myanmar Society from below. This political thinking was largely shared by NCA, but while NPA saw a value in expanding its support within Myanmar, NCA maintained an idealist approach. They aimed to support exile organizations push for human rights and hold international donors, the Myanmar government, and the military accountable for their actions.

One of the most difficult dilemmas for aid providers working in authoritarian and repressive states involved in violent conflict is the trade-off between getting humanitarian access in the short term and securing human rights for the future. To gain access to the areas where people are in desperate need of outside assistance, humanitarian providers need to bargain and compromise with the regimes that cause the suffering. Where the line between confrontation and collaboration should be drawn is a constant source of debate among aid providers.

The controversies in Myanmar concerned two strategic divides: One between staying neutral (NRC) and having apolitical agenda (NPA, NCA); and one between maintaining a distance to the old regime (NCA) and seeking careful engagement (NRC, NPA). However, I would argue that despite the competing strategies, the different approaches among humanitarian actors have, unintentionally, contributed to a division of labour, enabling them to address a variety of Myanmar’s humanitarian needs.

Achieving peace, development and democracy in a country like Myanmar, with its complex conflict dynamics and history of injustice and repression, is bound to be a long and winding road, involving a multitude of actors and engagement strategies. There is no simple recipe to progress.

My first visit to Myanmar back in 1998, and the journeys of other travelers at the time, didn’t do much either way concerning democratization or repression. But it did lead to some incredible meetings between people with different experiences and references, to meaningful exchanges of ideas and insights, and to long-lasting friendships. Similarly, it is not the different approaches of various aid providers that is going to determine the success of Myanmar’s peace process or path to democracy and prosperity. That will be the struggle of the Myanmar people. However, the diversity of support that humanitarian actors can provide to people in desperate need and to people with aspirations, abilities and a commitment to transform their country and their communities has been crucial in the past and will remain important in the years to come.

This piece was originally published in PK Forum.