In the early morning hours of Wednesday 19 August, the Malian President Ibrahim Boubacar Keïta (IBK) appeared on national TV to resign after a military junta had arrested him, the prime minister and several other members of the administration the day before. Motivated by dissatisfaction of military salaries and political corruption, the coup took place in the wake of a popular protest movement against the government, driven by the political opposition Mouvement du 5 Juin – Passemblement des Forces Patriotiques (M5-RFP) The M5-RFP has also criticised IBK’s administration for a lack of response to the March kidnapping of opposition leader Soumaila Cissé, who is still in captivity. These parallel movements created the space and opportunity to topple what was viewed as a failing regime. 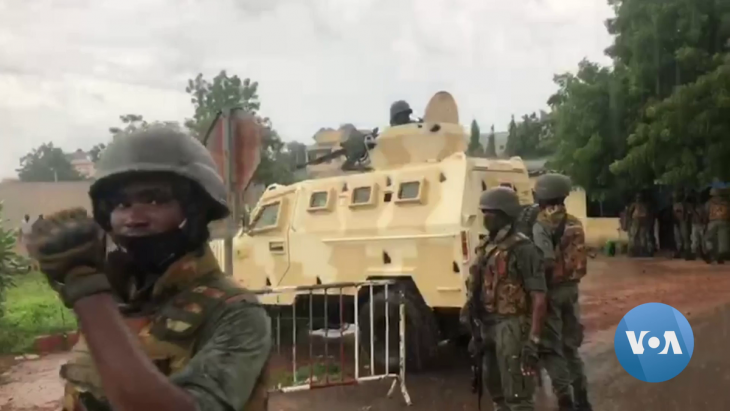 A scene from the coup in Bamako. Photo: Mariama Diallo (VOA)

Mali is now at a crossroads. While the coup might be seen as a destabilizing political force, it could afford opportunities for reflection on the inclusivity of government and safeguards against corruption. In this regard, informal dialogue mechanisms and legitimate, local representation will be key to a smooth transition and the ultimate success of the new order.

A decisive and bloodless coup

In the morning of 18 August, a military mutiny took place at the Kati military camp, just outside the capitol Bamako. Early reports came in on the arrests of various ministers, including the President of the National Assembly Moussa Timbiné, the minister of finance Mr. Abdoulaye Daffé and the minister of defense Ibrahim Dahirou Dembélé. As the military entered Bamako, they were met with a cheering population. In the early evening, the arrest of President Ibrahim Boubacar Keïta (IBK) confirmed the coup. As IBK resigned his presidency and dissolved the National Assembly a few hours later, the leaders of the coup, now under the name of the National Committee for the Salvation of the People (CNSP), addressed the people of Mali. They called for political transition of power, new elections, and confirmed their desire to maintain relations with the international community and strengthen the implementation of the Algiers peace agreement. Colonel Assimi Goita, from the Malian special operation forces (BAFS), was appointed president of the CNSP. The coup faced little resistance in Bamako and society went back to normal the next day.

Unsurprisingly, the international community including ECOWAS, UN, AU, EU, France and the United States condemned the coup and called for constitutional restoration. The AU suspended Malian participation in the organisation and ECOWAS stopped all economic transaction with Mali, sent a high-level mediation team to Bamako and called for the activation of the ECOWAS Standby Force. On Friday, the US —which had trained Col. Goita and members of the BAFS prior to their involvement in the coup — suspended further military training and assistance to Mali.

While the CNSP called for continued partnership with the international community, external actors diverge in how constitutional restoration ought to play out in Mali. France has called for reestablishment of civil authority, but ECOWAS has gone further in calling for the reinstatement of IBK. In recent dialogue with ECOWAS, IBK stated he has no wish to resume his presidential duties. International partners will likely push for expedient elections, but this process must respond to grievances against a recycled political elite, ensure inclusive local representation and develop legal avenues for preventing corruption and political overreach.  The hope is that coups do not become the norm.

Coups: A vicious cycle for the Sahel?

Coups have become a well-known mechanism for upsetting corrupt structures of an entrenched political elite that is failing to supply basic services such as education, healthcare and security to its population. Of the four elections envisaged for the G5 Sahel countries in 2019, only the Mauritanian presidential elections went ahead, with elections in Burkina Faso, Mali and Chad postponed. Burkina Faso has never experienced a purely democratic transition of presidential power in its 60-year post-colonial history. Chad’s president Idriss Déby has held office since 1990. Like those of the other G5 States, the Malian constitution is modeled after the French one, but repeated coups demonstrate the checks and balances outlined in the French model have been inadept at preventing corruption and political overreach.

Ensuring the independence of the legislature and courts

IBK was able to control multiple branches of government during his seven years in office. He manipulated the Constitutional Court (appointed by the president, National Assembly and Supreme Council) and exploited the low voter turnout spurred by the Covid-19 pandemic to position his favourite candidates in the National Assembly, whose elections had been postponed since November 2018. This sparked popular opposition because regional and local representatives are viewed as critical to ensuring the national government responds to needs of diverse, local communities. In a survey of 109 civil society representatives from all ten regions of the country just prior to IBK’s re-election in 2018, 75 percent of respondents reported they were more interested in local and regional elections than national ones, 65 percent stated the national elections would not be free, transparent and credible, and 64 percent feared electoral violence.

During his resignation, IBK dissolved the National Assembly, which would normally oversee the transition as in 2012. Because of the contested legitimacy of National Assembly President Moussa Timbiné, along with 30 other parliamentary deputies, it will be necessary to find a transition leader outside of the old political elite (perhaps a woman or other under-represented member of society – geographic, ethnic or class) and to hold new parliamentary elections credible in the eyes of the people.

The importance of inclusivity

In times of conflict, political restructuring, and peace and reconciliation efforts, disruptions call the status quo into question. This opens opportunities to improve the participation of under-represented groups such as women and youth both in formal and informal processes.

Informal mechanisms will perhaps be more pertinent to a smooth transition than formal structures. The coup has opened channels for dialogue between security forces and the population, which Malians surveyed in 2017 underlined as the most critically needed facet for civil society to improve the peacebuilding process. IBK’s Inclusive National Dialogue of December 2019 was mired in critiques of a lack of enforcement of its propositions, diverging opinions on these conclusions and a significant boycotting of the dialogues in the first place. Credible and inclusive dialogue in formal and informal sectors could bring the country together to confront political, security and developmental challenges.

While the political crisis might further destabilise in the short term, it also allows for a moment of reflection on the political system. Going forward, inclusivity and mechanisms to safeguard the separation of powers are critical to the process of constitutional restoration. Legitimacy of leadership can hopefully improve the connections between government, the security forces and the population, and counter the likeliness of future coups.