On 19 November 2020 US Secretary of State Mike Pompeo became the most senior US politician to officially visit an Israeli settlement on the occupied West Bank. This visit, and his ensuing statement that products from Israeli settlements can be labeled as “Made in Israel”, mark the swan song of US support for the two-state solution. 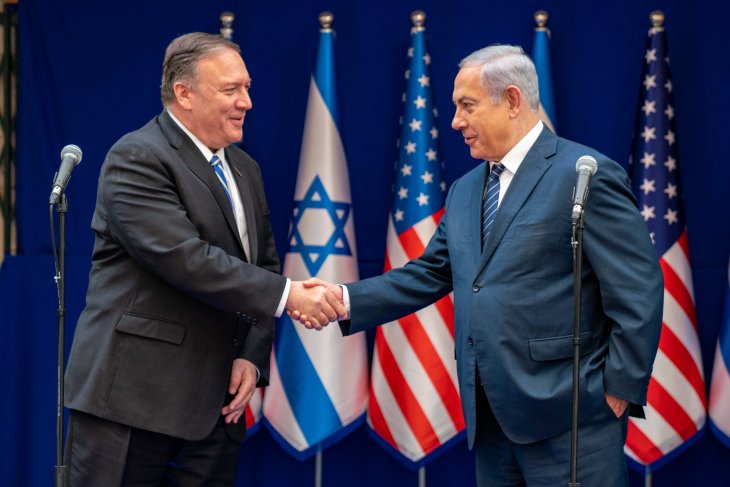 By the end of his second term President Barack Obama had nothing left to lose, he was exhausted by a peace process that had gone nowhere and he was fed up with Israeli Prime Minister Benjamin Netanyahu who had dug in his heels and conceded close to nothing on the settlement issue. Obama’s parting gift to the Israel-Palestine conflict was UN Security Council Resolution 2334. It was a last-ditch attempt at securing the survival of the two-state solution. It was remarkably clear in its wording:

“Condemning all measures aimed at altering the demographic composition, character and status of the Palestinian Territory occupied since 1967, including East Jerusalem, including, inter alia, the construction and expansion of settlements, transfer of Israeli settlers, confiscation of land, demolition of homes and displacement of Palestinian civilians, in violation of international humanitarian law and relevant resolutions, Expressing grave concern that continuing Israeli settlement activities are dangerously imperilling the viability of the two-State solution based on the 1967 lines”. It went on to state: “Calls upon all States, bearing in mind paragraph 1 of this resolution, to distinguish, in their relevant dealings, between the territory of the State of Israel and the territories occupied since 1967”.

This, in other words, was not just a reaffirmation of the guiding principles behind the two-state solution but also a call to arms for states around the world to enact policies of differentiation to secure the continued viability of the two-state solution. While many states label the difference between the occupied territories and Israel proper, it is often not enforced in any meaningful way, leaving it up to consumers whether they will purchase goods produced in the illegal settlements or not.

Trump and the end of an era

Trump has had a seemingly insatiable thirst for dismantling the two-state structure. His list of merits in that regard would be impressive if it was not for their detrimental affect on a potential peaceful solution. He recognized Jerusalem, in its expanded entirety, as Israel’s undivided capitol and moved the US embassy there. He cancelled the US policy of seeing the Israel settlements as illegal. He put forth a peace plan accepting Israeli annexation of all the settlements and the Jordan valley. In addition, he closed down the PLO office in Washington DC and he closed the US consulate to the Palestinian territories.

Pompeo’s visit has ensured that the curtain has been pulled back: A Palestinian state is off the table.

He then, finally, doubled down on all of this by sending his Secretary of State to an Israeli settlement and claimed that produce from the settlements can be marked as “Made in Israel”. Taken together, all of this means that there is no longer room for a Palestinian state. With Jerusalem off the table, with all the settlements in Israeli hands and with the Palestinians entirely left out of the diplomatic process there is simply nothing left of the two-state solution. Pompeo’s visit has ensured that the curtain has been pulled back: A Palestinian state is off the table.

When Netanyahu earlier this year threatened to annex portions of the West Bank the EU and other international actors were in panic mode because they saw in this threat the death knell of the idea of two states for two peoples. That threat was temporarily taken off the table with the UAE-Israeli normalization agreement and the international community breathed a sigh of relief. Mike Pompeo has now ensured US acceptance of the one state solution that the Israeli government seems so intent on, without having to formally annex.

Israel, then, has received a US green light for a non-democratic one-state solution: One land, two peoples, two systems. Trump’s parting gift to Israel is a one-state blessing.