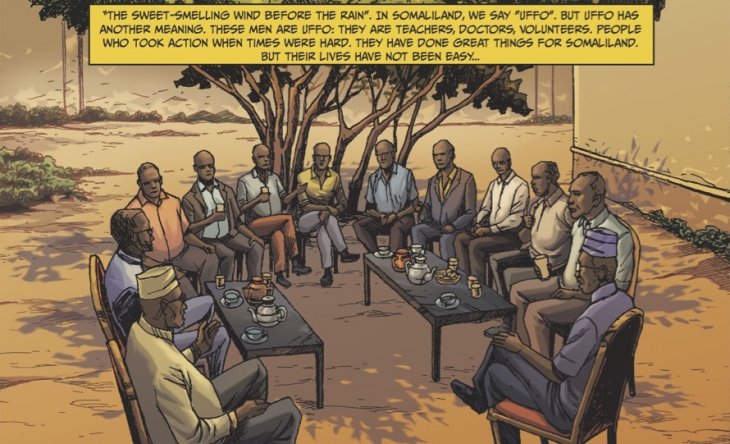 We can all learn and draw inspiration from stories of ordinary people who care for others and resist oppression while risking their own lives. Such stories are often overlooked in both the media and in much research on conflict zones.

In Somaliland in the early 1980s, doctors and teachers and other professionals addressed serious negligence in the social sector by restoring a hospital.[1] This was both a humanitarian activity responding to the acute suffering of patients, and a way of resisting the oppressive policies of the regime. Two of the professionals also wrote a newsletter called ‘Uffo’, which means ‘the sweet-smelling wind before the rain’. The meaning seemed to have foreshadowed what happened next. When the professionals were arrested a few months later, this event became the spark that ignited and inspired others, especially youth and women, to protest the regime openly.

Despite the Uffo story’s historical importance, it is little known and instead, narratives of crisis, conflict and violence are the norm in reports from the Horn of Africa. Ordinary people are commonly portrayed as either perpetrators or passive victims. This gives a flawed picture that downplays essential parts of human experience, such as courage, creativity, and care for others. In my doctoral research I have therefore chosen to focus on the case of Uffo, which highlights the role of people acting together to counter violence and oppression.

To communicate this story to new and larger audiences, I have been part of a production team of producers, story tellers, artists and researchers, to create a comic in five parts in both English and Somali It was produced by PositiveNegatives, an organization that produces educational comics to raise awareness about social and humanitarian issues across the globe. The production team met Uffo in Hargeisa to discuss the comic at the early stages. The Uffo professionals were then given the opportunity to provide feedback at several crucial steps in the production, including to comment on drafts of the script and sketches of the artwork.

The process behind the production of the comic was informed by rigorous research, including in-depth interviews with the Uffo professionals and people who participated in the protests, many of them women. As part of the research process, the interview data has been triangulated with archival data, secondary literature, and dozens of interviews with a diverse group of men and women who were present at the time.[2]

The comic powerfully illustrates the role of agency in challenging circumstances. Those who read through all five chapters will find out how Uffo invented astonishing ways to survive and stay sane during the harsh prison conditions in isolation (Note: all Tolstoy’s fans will be pleasantly surprised). This smaller part of the story captures the professionals’ care for each other as well as their capacity to create light in the dark, which is a common thread through the whole comic. These stories can be transformative in themselves, as they have the power to inspire and show us what is possible in otherwise grim situations. 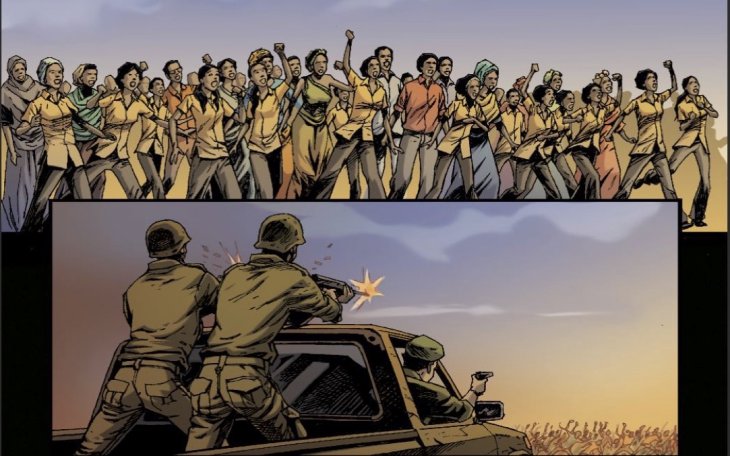 I wish for the comics to be read by youth in Somaliland and in the diaspora. While I was conducting the research in Somaliland, I got involved in the process of creating a 13-episode TV program about Uffo in Hargeisa in 2018 together with  . I followed journalists to universities and other public spaces where they were asking people on the street whether they had heard of Uffo. Very few had. One contributing reason is the country’s cautious approach to bringing up painful memories from the past, which could contribute to division. However, the story of Uffo is not only a painful one, but also carries messages of hope and strength, which I saw inspired the young women and men I worked with in Hargeisa, most of whom had not heard the Uffo story before.[3]

Shukri Sagal Ali, one of the research assistants I worked with, explained how she experienced the story as “life-changing”. It made her realize that her country’s history was not only filled with conflict and division, but also contained stories of people who were risking their lives to support people across clans. Inspired by the new insights, several of the research assistants started developing their own social activities within the educational sector. This illustrates how engaged researchers not only can contribute to social change through the findings and insights generated by their research, but also throughout the ripple effects of the research process itself and from the stories that are being illuminated.

Several of the Uffo professionals later got political asylum in countries such as the UK, Canada, the Netherlands, Norway, and the US. I therefore also wish for the comic to be read by people living in those countries, as it will give us a better understanding of the lives of fellow citizens with refugee backgrounds.

Today, the world is facing a multitude of interconnected crises, such as global inequalities, climate and ecological crises, exclusion, and oppression.

Cameroonian philosopher Achille Mbembe has emphasized that one of the most important questions of today is how life “can be repaired, reproduced, sustained and cared for, made durable, preserved and universally shared”. According to Mbembe, the world can learn from examples of the politics of care and repair, which are plentiful on the African continent. Visualizing the story of the professionals in Hargeisa allows us to share a case where people got together to care for and repair their world. The supportive responses they elicited in the process, show the politically explosive potential of acts of solidarity and social justice in processes of societal transformation. Current social movements can learn and draw inspiration from these examples in their quests to care for and repair the world.

[1] It was then the northwest region of Somalia.

[2] The main research insights will be published in a PhD monograph by Ebba Tellander as part of the TRANSFORM project led by Cindy Horst.