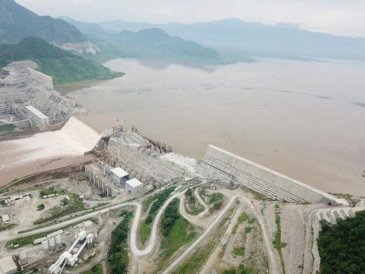 This hydropower project could trigger regional conflict in Africa.

Conflict related to renewable energy received considerable international attention in 2020 with the launch of the Grand Ethiopia Renaissance Dam (GERD). Ethiopia began constructing what is now Africa’s largest dam back in 2011 in order to increase its low levels of domestic electricity access as well as to export electricity to neighboring countries. Since its inception, however, the dam has sparked controversy for its environmental impacts, questionable design, accusations of corruption in its construction, and for its potential impact on the regional politics of shared water management. Experts, politicians, and policy makers have raised concerns that the filling of the reservoir in July 2020 could trigger a regional conflict between Ethiopia, Sudan, and Egypt – with Egypt having threatened war over the dam in 2013 and more recently launched a cyber war against Ethiopia on the issue. International disputes about the GERD dam have not disappeared despite the flurry of recent media attention to the Ethiopian federal government’s ongoing militarized confrontation with the local government of the northern Tigray region.

Why the dam dispute? Neighboring countries Sudan and Egypt fear that the dam will reduce the flow of water from the Nile down river (especially during droughts). The populations of these two states depend heavily on the river for daily use and economic activities. The GERD sits on the Blue Nile, one of two main tributaries of the Nile and the source of approximately 80% of the Nile’s water. Egypt is particularly dependent on the river, whose flow originates from places mostly outside its borders. The majority of the Egyptian population lives along the river and its agricultural sector is heavily reliant on it due to its desert climate: an estimated 80% of the Nile’s waters in Egypt are used for agriculture.

Weak governance of the Nile as a water source shared between several states – an international, collectively shared natural resource – is arguably the main source of the thus-far non-violent dispute among some of Africa’s largest and most heavily militarized countries. Agreements have been drawn up over the years between Egypt and Sudan to govern use of the Nile, the first in 1929 and a second in 1959. Both of these agreements recognized Egypt’s right to draw large volumes of water from the river and Sudan a smaller amount, but excluded other neighboring countries like Uganda, Tanzania, and Ethiopia from accessing the river. The Nile Basin Initiative was started in 1999 as an intergovernmental partnership of 10 Nile Basin countries to facilitate cooperative management of the river, and several of these member states have now signed the Cooperative Framework Agreement to push towards a more equitable allocation of water. And 2015, Ethiopia, Egypt, and Sudan signed the Cooperation of Principles to help resolve conflicts over the GERD dam, but this agreement does not resolve any other issues regarding management of the river and access to, and use of, its waters. But talks mediated by the United States collapsed in early 2020 and Sudan, Egypt, and Ethiopia failed to reach any kind of agreement for how to regulate the flow of water from the GERD or how to more equitably manage the river’s resources among dependent states.

Currently, hydropower represents the largest source of renewable energy both on the African continent (and worldwide), and more hydropower projects are planned on the continent. A significant body of scholarly work exists on the topic of so-called “water wars”: how internationally shared water resources can, under certain circumstances, result in both conflict and cooperation. A recent systematic literature review of transboundary hydropower dams stresses the importance of good governance mechanisms in mitigating conflict over these projects: “Whether transboundary hydropower dams lead to optimal outcomes is highly dependent on underlying benefit sharing arrangements as well as an explicit acknowledgement and tackling of governance asymmetries.” Whether the countries affected by the GERD dam will take up this advice, however, remains to be seen – particularly at a time of renewed armed conflict in northern Ethiopia.