On January 20th, 2021, Joe Biden will be inaugurated as the 46th president of the United States, marking the end of four tumultuous years. It would be an understatement to say that Donald Trump and Joe Biden are two very different leaders, and we can expect that there will be many changes with how the country is run in the next 4 years. One especially interesting difference is how Trump and Biden embody different ideas and representations of masculinity and what it means to be a man in America today. 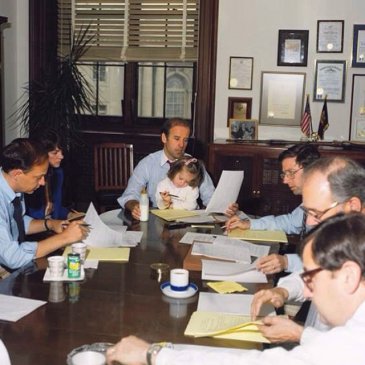 Joe Biden with his daughter Ashley Biden while working in the Senate (1980s). Photo: Public Domain

Being masculine and aggressive was a defining feature of Trump’s campaign and presidency. There were many notorious highlights, but one memorable one was in 2016, when Trump talked about his high levels of testosterone and how this would benefit him if elected as president. Throughout his presidency Trump represented a certain ideal of American manhood. By being tough, aggressive, bullying others, and often celebrating violence, Trump tried to posture as a “real man” that could “Make America Great Again”. He also tried to position himself as more manly than Biden in the 2020 campaign, and even mocked Biden for wearing a mask as a way to say he was weak. Tomi Lahren, a commentator for Fox News and ally of Trump, made the relationship between masculinity and masks even more clear when she tweeted that Biden “might as well carry a purse with that mask.”

While Trump might be on his way out of the White House, his rhetoric does not seem be going away anytime soon. His glorification of hypermasculinity spoke to large groups of men in the United States and resonated with them about what they thought a man’s role in society was. One clear example was in the lead-up to the 2020 election: Trump proclaimed at a rally for suburban women that he would reopen the economy, and help with “getting their husbands back to work”. His words symbolized his belief, and those of many of his followers, that it is a man’s role to provide for, and in so doing protect, the family.

Tomi Lahren made the relationship between masculinity and masks even more clear when she tweeted that Biden “might as well carry a purse with that mask.”

Trump’s normalization and embracement of violence has bolstered male-only groups like the “Proud Boys”. Considered an extremist group by the FBI, the Proud Boys are a male-only group that sees Western culture and chauvinism under attack and tries to protect these values, often through violence. This group and others like it have grown and flourished during the Trump presidency. There was even the disturbing moment during a 2020 presidential debate where Trump told the Proud Boys to “stand back and stand by” when asked if he condemned white supremacist and militia groups. This lack of condemnation of right-wing violent extremism by Trump was also quite similar to how he responded to the deadly Charlottesville protests in 2017. After the attack on the US Capitol on January 6th it has become clear that Trump’s rhetoric has had concrete consequences, and as masculinities researcher Jackson Katz argues, many of the men out there that day were there to “prove their manhood”.  Trump may be leaving office, but it would seem these groups are only growing in numbers and momentum, with future attacks planned.

When it comes to thinking about gender and how it shapes men’s identity and behavior, this is a topic that is sorely in need of further development. Unfortunately, gender is commonly seen as relevant for women, with little influence over men. Masculinity should be thought of and defined as how people’s identity, actions, and beliefs are shaped by individual and societal wide notions of what it means to be a man. An important point is that there isn’t one masculinity, but rather “masculinities”, meaning that there isn’t a single way of being a man but rather a plurality of identities that relate to what people understand manhood and being a man is about. Researchers using masculinity as an analytical concept have provided further knowledge on many topics, including the relationship between masculinity and violent extremism, which PRIO Global Fellow Jacqui True has investigated extensively. Similarly, a gendered analysis of their masculinity can be helpful when considering this presidential transition.

There isn’t one masculinity, but rather “masculinities”, meaning that there isn’t a single way of being a man but rather a plurality of identities that relate to what people understand manhood and being a man is about.

One of the more memorable moments from Biden’s campaign for president was when someone questioned him about his age, and Biden responded by challenging him to a push up competition. This also highlights the ways that Biden can at times feel a need to show his strength and dominance. So, in what ways can we expect Biden to be different from Trump in terms of how he models himself as masculine and what it means to be a man, and what might it mean for his presidency? We saw during the election how Biden attempted to project himself as a different type of man than Trump throughout the election season, from the way that Biden has portrayed himself as someone who has experienced many emotional hardships, and understanding people’s sense of loss, to the fact that he chose Kamala Harris as his Vice-President (offering quite the stark contrast to Mike Pence, who refuses to dine alone with women due to him thinking it is disloyal to his wife).

While the physical and generational appearances of Biden and Trump might not be dramatic, there are and will be huge contrasts in their leadership styles, masculine identities, and approaches to many topics. These differences in their masculinities could have effects as far-reaching as their approaches to trade agreements, addressing gender and other social inequalities, as well as supporting democratic norms and institutions, both home, and abroad. The next four years will be an interesting case in how men in power can express themselves vastly differently.