A study of flawed democracies and semi-dictatorships describes a common pattern of events as follows: After having lost an election, the sitting president claims that the election was invalid, whereupon he attempts a coup d’état and his supporters storm the parliament.

A few years ago, this sequence of events would have been unthinkable in any OECD country. Last week, however, it offered a good description of events in the OECD’s most powerful member. Trump attempted to steal the election and his supporters stormed Congress. It may be time to view the United States as on a path to a mixed regime, or what political scientists call an anocracy. 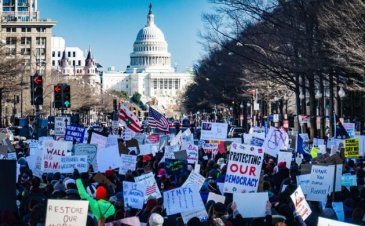 The global superpower that is the United States is now a “burning city upon a hill”, writes Tore Wig. Photo: Ted Eytan / Flickr

But first of all, have we been witnessing an attempted coup in the United States?

Among researchers, the definition of a coup d’état is controversial. The political scientists Jonathan Powell and Clayton Thyne have created the most widely used global data set for coups. In an article published in 2011, they arrived at what they believe to be the essence of the term “attempted coup”: “illegal and overt attempts by the military or other elites within the state apparatus to unseat the sitting executive”. In recent days, Trump has attempted pressure election officials to “find” votes and on senators and Mike Pence to declare the election invalid. The only thing that is inconsistent with Powell and Thyne’s definition is that Trump is the sitting president, and his coup attempt or attempted “self-coup” was against the president elect.

In 2016, in collaboration with Espen Geelmuyden Rød (Uppsala), I wrote a research paper examining coups that occurred in the wake of disputed elections. We looked at 958 elections in 117 countries (1950–2011) and found that coup attempts often followed elections in undemocratic regimes, where the sitting president lost power and/or there were election-related protests. At the time we wrote our article, we did not foresee that this model would come to describe events in the United States.

Trump’s attempted self-coup and the storming of Congress are symptoms of a regime in its death throes. The country has failed one of the most critical tests for a democracy: the peaceful transitioning of political power. Despite the fact that Biden will (in all likelihood) be sworn in on 20 January and the Democrats will gain control of the Senate, there are serious structural problems within American institutions that may push the country further towards authoritarianism.

To start with, major elements in the political elite are not committed to democracy. Senators such as Ted Cruz and Josh Hawley have attempted to prevent certification of the election result, and large parts of the Republican Party have lent rhetorical support to Trump’s pro-coup behaviour. A divide between those who support democracy and those who would like to introduce some kind of dictatorship now runs straight through the Republican Party.

Commitments to democracy are also weak among parts of the electorate. As recent research (including that of Svolik and Graham) has shown, commitment to democracy as a norm is not strong among many voters. On top of this, the president has now convinced his followers that the election was stolen. In order to gain power in the future, Republican politicians will have to win over these voters. This may contribute to a further erosion of American institutions.

This picture is made worse by the fact that America’s electoral institutions are inadequately representative of the population. The antiquated Electoral College system gives small rural states a disproportionate amount of power, and this disproportionality will increase. To give an example: the Democrats could win the popular vote in 2024 by a margin of three percent, but still lose the presidency. The Senate is an even greater problem, with large, populous states such as California having the same numbers of senators as the sparsely populated state of Wyoming.

On several dimensions of democracy, the United States now fares poorly. Free media has been under significant attack by the Trump administration, there is substantial voter suppression, eroding constraints on the executive, political violence during elections, civil liberties are under strain, and attempts by political elites to steal elections.

Accordingly, the United States democracy score has been downgraded by widely-used (by researchers) democracy indices maintained by V-dem and Polity. Imperfect democracies combine features of democracies (such as elections) with those of dictatorships (such as a lack of peaceful power transitions). This will most likely continue even with Biden as president.

The United States must be viewed as an unpredictable regime with a non-trivial risk of transitioning into dictatorship. Could an authoritarian candidate – a potential dictator – be elected as a Republican president in 2024, or could the Republicans succeed in a coup d’état at the next crossroads? This is not the likeliest scenario, but no longer unthinkable.

Those who need to understand the United States in the coming years, including political elites in Norway, must now take account of perspectives from research into semi-democratices and fragile regimes, and focus less on the political horserace and the formal institutions that often characterise discussions of American politics here in Norway. They must study the informal rules of the game that govern elites in authoritarian parties, that it now appears the Republicans could become, and understand how and why political regimes collapse.

One of the most important lessons from research into semi-democracies and fragile regimes is that they are very unpredictable. Even if Biden assumes power, Norwegian politicians will be well-advised in the longer-term to reconsider Norway’s high military dependence on the United States, and look to Europe, which consists of more stable democracies. We can no longer put our fate entirely in the hands of a country with a non-trivial risk of regime change.

Trump and the Republicans have been playing with matches and gasoline, and the United States is now a “burning city upon a hill”.

Related: Listen to PRIO’s Peace in a Pod episode 21 “”Like watching a democracy die”: Two Researchers Contextualize What Happened in the US on January ‪6‬”
Share this: