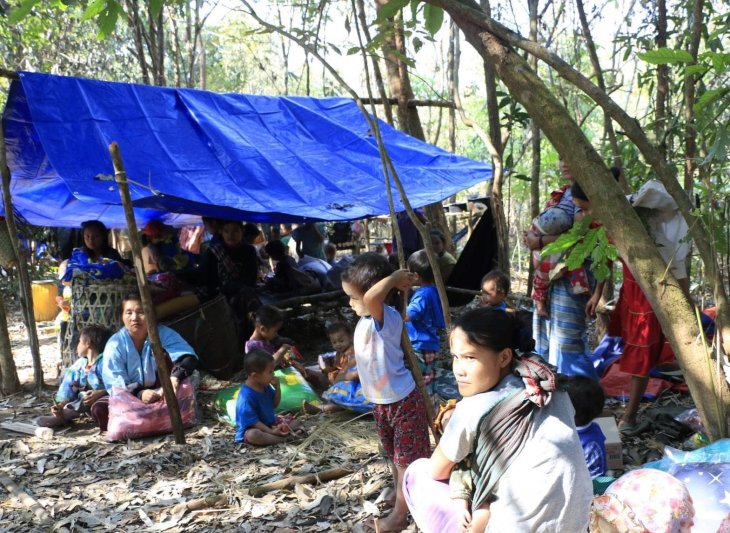 These are some of the over 6500 civilians in northern Karen State who have fled their homes since fighting resumed in December 2020. They are still in the hiding. Photo: Free Burma Rangers

The February 1st military coup in Myanmar and the massive demonstrations that followed have deservedly gained the world’s attention. The people of Myanmar have had their taste of democracy, however fragile it was, and now refuse to let go of it. But what about peace in Myanmar?

Initiated along with other reforms in the early 2010s, the peace process in Myanmar, if not already dead, now faces an uncertain fate. The Peace Process Steering Team (PPST), a joint body of 10 Ethnic Armed Organizations (EAOs) that have signed the so-called Nationwide Ceasefire Agreement (NCA) and been in talks with the government since 2015, has announced its suspension of negotiation with the coup-makers.

It has been sad to witness the Burmese military, or Tatmadaw, betraying democracy and the peace process for the advantage of complete political power. Looking critically back at the past decade, however, a sadder fact seems to be that the Tatmadaw never meant what it said about democracy and peace. At the very least, its understandings of the concepts are not compatible with the people’s.

Illiberal Peacebuilding All Along

Peacebuilding in Myanmar during the past decade may be best characterized as what some academics call illiberal peacebuilding, which aims to contain rather than to resolve conflicts. Instead of “liberal ideals of equality and liberty”, it emphasizes “illiberal norms of inequality and order” (Smith et al., 2020, p. 4). Although it may meet its own goal of reducing violence, empirical evidence elsewhere shows that illiberal peacebuilding does not resolve conflicts or last long.

Though different in form and context, the form of peacebuilding seen in Myanmar during the 2010s was qualitatively little different from what had been observed during the 1990s, when the ceasefire agreements that were secured resulted from the Tatmadaw’s use of two illiberal strategies: military offensives and economic incentives. In fact, the only major difference was the political context in which they took place.

In the early 2010s, the Tatmadaw institutionalized a hybrid political order, neither fully authoritarian nor fully democratic, and initiated a peace process within it. Very quickly, it gained the legitimizing acceptance of international actors who believed that Myanmar was now gradually transitioning into a full-fledged peaceful democracy. Some, including Norway in 2016, even classified it as a post-conflict country.

However, a reality check on the dynamics of peacebuilding on the negotiation table and on the ground points to the direction that the Tatmadaw not only continued but even advanced its use of illiberal strategies. In addition to military pressures and economic incentives, the Tatmadaw added some political optimism through a peace negotiation process in which it has had no genuine interest in addressing ethnic grievances.

Peacebuilding between the State of Myanmar and Karen National Union (KNU) illustrate the workings of illiberal peacebuilding. As the oldest EAO in the country, KNU signed a bilateral preliminary ceasefire for the first time in its 62-year long history in 2012, at a time when Kachin Independence Organization (KIO) was forced back to the battlefield after a 17-year ceasefire, shifting the geographies of war and peace.

by using proxy-militias and avoiding drawing clear ceasefire demarcations, the Tatmadaw ravaged the region, leading to frequent confrontations with KNU and massive civilian displacements multiple times. As I write, 6500 Karen civilians are fleeing.

In negotiations, which became deadlocked as soon as they began and which excluded the biggest EAOs making up approximately 80 % of the total non-state fighting forces, the Tatmadaw demonstrated little willingness to resolve the core cause of conflict, namely that of unitary-vs-federal rule. Instead, it prioritized engagement with local proximate causes of conflict, which are control over territories, populations, and resources. This has alarmed the Karen community, for good reason, about the Tatmadaw’s intentions.

First, instead of withdrawing its troops to build trust and contribute to civilian safety, it did the opposite by building new and improving existing military camps and repeatedly attempting to expand its territorial control into the most inaccessible KNU areas. Moreover, by using proxy-militias and avoiding drawing clear ceasefire demarcations, the Tatmadaw ravaged the region, leading to frequent confrontations with KNU and massive civilian displacements multiple times. As I write, 6500 Karen civilians are fleeing.

Second, a significant expansion of the state presence into ethnic Karen areas has been observed since 2012. In attempts to ‘buy’ legitimacy and undermine KNU’s authority, for example, the Tatmadaw has, after direct consultation with parts of the local population, built new and transformed former KNU-administrated schools into government schools. This has created great frustrations for KNU whose movement has been precisely about self-rule of this nature and which hoped to realize that through the peace process.

Third, adopting an economic approach to peace, supported by foreign governments and private investors, the state of Myanmar has to some extent transformed the region “from a battlefield to a marketplace” (Choonhaven, in Erlanger, 1989), but one that remains heavily militarized and violent. In such an environment, where guns are everywhere but fair laws absent, many civilians have had their lands forcibly confiscated and their quality of life decreased. Additionally, the influx of economic activities has also increased ethnic perceptions of resource grabbing and, in some cases, leading to increased fighting.

The Form of Peace Achieved

If even worthy of the name, the peace achieved was deliberately designed by the Tatmadaw for the rich and powerful, domestic and foreign elites. For the poor and powerless, this peace means persistent injustice and poverty, continued fear of abuse and constant anxiety about full-scale violence recurrence, and forced displacements due not only to armed conflict but also to land confiscations in the name of ‘development’.

Although the decrease in physical violence is positive, this form of peace cannot be celebrated because, as Brenner (2015, p. 339) writes of the KIO ceasefire, it “left underlying grievances unaddressed and planted the seeds of new ones …”. At best, it can be described as a negative hybrid peace, where violent behaviors have changed to some extent, but conflict causes remain unaddressed and hostile attitudes unchanged.

International actors must stop, intentionally or not, carrying “fire in the one hand and water in the other”

If anything, the last decade has, perhaps not surprisingly, (re)taught us that it is too much to expect of the Tatmadaw, whose wealth and power are dependent on the persistence of inequality and violence, to produce a peaceful and decent society for the people of Myanmar.

In the current struggle against injustice, it is required by all those who wish for democracy and peace to meet at some mid-point. The ethnic Burmese majority and National League of Democracy (NLD) need to genuinely recognize the rights of ethnic people. The discrimination against Rohingya minority and the unjust NLD-endorsed land law, which does not recognize indigenous land governance but allows the government to sell ethnic lands, are among acts that cannot continue. A new constitution, but also changes in the hearts, minds, and attitudes, are needed.

For ethnic minority groups, it remains important to continue to think beyond internal ethno-nationalism and embrace the idea of a federal democratic union. Despite NLD’s failure, hope is needed. International actors must stop, intentionally or not, carrying “fire in the one hand and water in the other”, rethink the real-world implications of their actions and policies, and listen to the people. Democracy and peace can only be made with them, not for them alone.