The coup d’état in Myanmar marks a defeat for the military’s attempt to create a “discipline-flourishing” democracy. 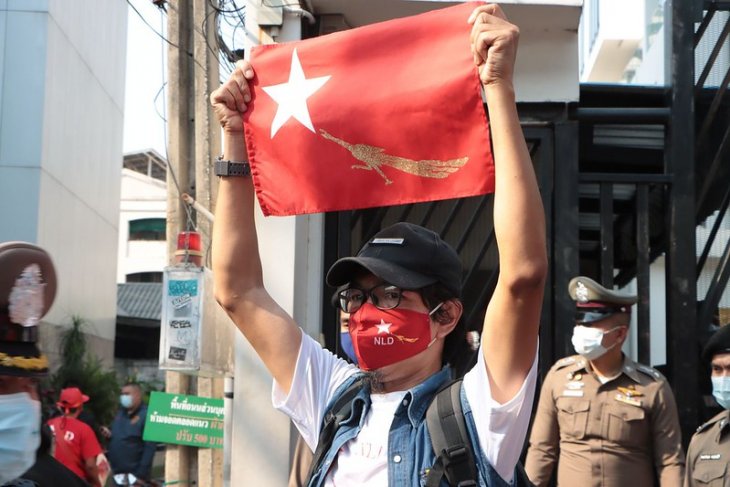 The coup occurred on 1 February, just before the newly elected parliament was set to convene. This timing made it easy to arrest the country’s leading politicians. The military used allegations of electoral fraud as a pretext. The real cause of the coup was probably the resounding victory of the National League for Democracy (NLD), Aung San Suu Kyi’s party, in the election on 8 November, which left the army chief, Min Aung Hlaing, fearing for his future. He was concerned about increased pressure to amend the military-drafted constitution and the loss of his own authority. His term as army chief was also due to expire shortly and his successor would be appointed by the newly elected president. Through the president, Suu Kyi would be able to influence the appointment of the new army chief. This did not suit Min Aung Hlaing at all. He saw his task as being to ensure that the military remains a state within a state.

In 2003, General Than Shwe’s junta launched a seven-step roadmap to “discipline-flourishing” democracy. The 2008 constitution was an important step. The constitution guaranteed the power of the military by giving it financial autonomy, responsibility for everything associated with national security, a majority on the National Security Council, the right to appoint the defence, interior and border affairs ministers, and 25 percent of the seats in all elected assemblies. The constitution also banned Suu Kyi from becoming president, because she has children who are foreign nationals. Since any amendment to the constitution requires a three-quarters majority, the military can veto changes. In 2010, a parliamentary election was held. The NLD did not take part, so the military got the results it wanted. In 2011, the parliament elected General Thein Sein as president.

Thein Sein went further with his reforms than most people in Myanmar had expected. He abolished censorship, released political prisoners, allowed Suu Kyi to be elected to parliament in a by-election, and negotiated ceasefires with many of the country’s armed groups. In addition, he granted licences to four competing telecommunications companies: the Qatar-based Ooredoo, the Norwegian Telenor, the previous monopoly company Myanmar Post and Telecom (MPT) and a new company, Mytel, which is a joint venture between military-owned companies in Myanmar and Vietnam. Competition between these companies allowed Myanmar’s population to experience a digital revolution. Facebook became the country’s dominant platform for exchange of information and opinions. This generated a boom in public debate, but also hate campaigns, particularly against the Muslim Rohingya people in western Myanmar.

The military miscalculated on one important point. It retained the country’s British-inspired electoral system, whereby the candidate with the highest number of votes in a given constituency wins the seat. Most likely, the military’s political party, the Union Solidarity and Development Party (USDP), believed that it would win enough constituencies to secure a parliamentary majority, since the military already held 25% of the seats. Things did not go to plan. In both 2015 and 2020, the NLD’s resounding victories secured it a majority in parliament. From 2016, the generals were forced to govern the country alongside Suu Kyi, who was elected by parliament to serve as “state counsellor”. The relationship between Suu Kyi and Min Aung Hlaing was ice-cold. The two governed in parallel. She ran a civilian government. He ran a military government. There was almost no coordination between them.

In 2016–17, in two major operations involving mass killings and the burning of villages, the military drove more than 700,000 Rohingya Muslims over the border into Bangladesh. The military leadership is currently being investigated in The Hague by the International Court of Justice and the International Criminal Court for genocide and crimes against humanity. In 2018, Min Aung Hlaing was also banned from Facebook, which closed down his own and a great number of other military accounts. In December 2019, Suu Kyi took it upon herself to defend the military. She travelled to The Hague and demanded an end to the investigations. Myanmar’s own courts could take care of the matter, she claimed, without mentioning that these courts are in the military’s pocket. In doing so, Suu Kyi destroyed her international reputation. Min Aung Hlaing concealed himself in her shadow. These events increased Suu Kyi’s popularity at home, and probably contributed to her electoral victory in 2020.

Min Aung Hlaing says that he will hold new elections after the state of emergency expires in a year’s time. Even if this happens, the elections will not be free and fair, because Min Aung Hlaing wants the presidency for himself. There is no doubt that he wants to enjoy a long period in power, like the dictators Ne Win, who ruled from 1962–88, and Than Shwe, who ruled from 1992–2011. But popular protests, an economic crisis, international isolation, and disagreements within the military may make it difficult for him to realize his goal.

The popular protests that have characterized Myanmar since the coup provide hope that democratic ideals will be able to take root in a new generation. Young people have had a taste of living in a free, open society. They are exposing themselves to great danger, but are combating their fear with humourous memes and fanciful acts such as blocking traffic with run-down cars, dressing up in colourful costumes, performing art and banging on pots and pans to chase away evil spirits. Suu Kyi’s old slogan “freedom from fear” has become a popular hashtag. Currently, the military are trying to ride out the storm. For several weeks, the police were hesitant to shoot at peaceful protesters. Soldiers dread having to do so. As of the end of February, more than 700 people have been arrested and more than 30 killed, but the protests continue.

From the numerous ranks of Generation Z, whose members have no memories of the previous century, new leaders will emerge. A struggle against dictatorship can, as in 1988–90, shape the worldview of an entire generation. This time we are not talking about guerrilla warfare, but non-violent civilian protests, strikes, civil disobedience and youth uprisings, which the whole world is able to watch in the form of video clips. There is still hope for Myanmar.