In the summer of 2001, a Taliban delegation came to Oslo in the hope of holding talks with Norway’s government. The terrorist attacks in the United States that autumn put a stop to such talks, but the Taliban’s attempt at that time to break out of the “steel ring” of international isolation may give some indication of their current thinking. Twenty years later, and with a full NATO withdrawal underway, how willing are the Taliban to negotiate? What can be done to salvage the shreds of the West’s good intentions in Afghanistan? And what interests and scope for action does Norway have in this matter? 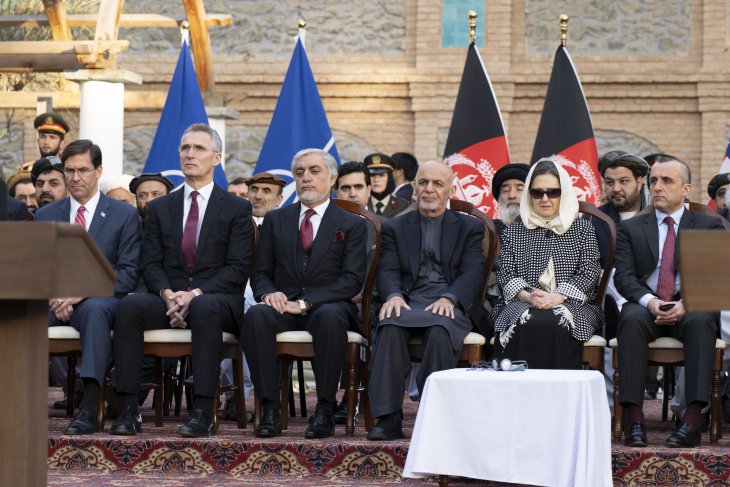 Ceremony marking the Joint Declaration between the United States and the Islamic Republic of Afghanistan and signature of an agreement between the United States and the Taliban. Present in the photo are Jens Stoltenberg, NATO Secretary General (second from the left); Abdullah Abdullah, head of the High Council for National Reconciliation (HCNR) (third from the left); and Ashraf Ghani, President of Afghanistan (third from the right). NATO via flickr.com

No one can say with any certainty what the Taliban are hoping for in the future. There is widespread agreement that the organization has changed since it held power 20 years ago, but where some people see an organization that is more flexible and open towards the outside world, others see a doctrinaire group that will be satisfied only with military victory and absolute power in Afghanistan. In the political negotiations with the United States and the Afghan government, the Taliban have said that they want an Islamic state, but without specifying exactly what this means. Accordingly, they are holding many doors open, but at the same time they are difficult to read.

The agreement that the Taliban and the United States signed at the end of February last year was in itself a victory for the Taliban. They sat at a negotiating table with the United States. They obtained a commitment that all international armed forces would be withdrawn. Prisoners were released. In return, the Taliban committed to prevent the use of Afghan soil for attacks on the United States and its allies, and to initiate negotiations with the other parties to the Afghanistan conflict.

What do the Taliban have to gain by holding further negotiations with the Afghan government? The Taliban are organized primarily for armed operations. They will scarcely wish to risk their internal loyalty or give up this negotiating card at this stage. Their war against the government forces has continued unabated and, from a military perspective, the Taliban can point to continual progress.

A possible answer is that there is also considerable war-weariness within the Taliban.

A possible answer is that there is also considerable war-weariness within the Taliban. Many lives have been lost. Much has been sacrificed. The Taliban’s leaders see that their organization is also vulnerable to external influences. Other states, such as Pakistan, will attempt to exploit the Taliban for their own ends. Non-state groups, such as al-Qaeda, have made it clear that Afghanistan’s best interests are far from the top of their agendas. And older Taliban have clear memories of the 1990s, when the Taliban were refused international recognition and were met with united international condemnation. They also realize that Afghanistan will need international support in the future. Perhaps this can contribute to making the Taliban leaders who come to a position of power – whether this in the form of a pure takeover in Kabul, power-sharing, or decentralization with autonomous Taliban rule in some areas – less doctrinaire and less oppressive than was the case in the 1990s.

Countries that in the last 20 years have participated in the international efforts to promote state-building, democratization and development in Afghanistan can help encourage the Taliban to move in this direction. We know a fair bit about how local Taliban leaders govern the areas where they have control. Much research, and at least one PhD, have been devoted to this topic. The answer is “it varies”.

In some places, the Taliban have a relatively good relationship with the population and with local leaders, especially where the Taliban leaders have local roots and fighting has ended. Many Taliban cooperate with aid organizations, both Afghan and international, and have de facto power-sharing arrangements with government authorities. At a higher level within the organization, the political leadership is ever more aware that government power requires more than dogma and firepower. It is now a long time since the Taliban first took up residence in Kabul and, as we said then, the Ministry of Agriculture consisted of one man with a Kalashnikov (on his desk).

The Taliban’s agreement with UNICEF last year to establish 4,000 schools in Taliban-controlled areas showed that cooperation can steer change in a liberal direction. The BBC recently broadcast a report from a Taliban-controlled area in the north where schoolbooks bound in bright UN-blue shone hopefully on the desks. Inside the books some of the old curriculum had been retained. A propaganda stunt, perhaps, but it made the message even clearer.

It would therefore be a great mistake for countries that until now have worked to promote development and rights in Afghanistan to turn their backs on the country if the Taliban obtain more power. Critical but “constructive” engagement does not always provide more influence than do condemnation, isolation and sanctions, but in the case of Afghanistan, the lesson to be drawn from the 1990s is that it has a positive effect.

For over 40 years, Norway has been engaged in, and provided aid to, Afghanistan.

For over 40 years, Norway has been engaged in, and provided aid to, Afghanistan. In the 1980s and 90s, aid agencies and diplomats established contact with key figures in mujahideen groups and later with the Taliban. Negotiations with both parties about the provision of aid were linked to the education of girls and women’s rights. This lay the foundation for subsequent Norwegian diplomatic contact with the Taliban and Norway’s contribution to the organization’s talks  with the United States and the Afghan government.

With international forces on the way out of Afghanistan, the possibility for negotiations once again takes center stage, but new challenges have emerged. The United States has now mostly entrusted the process to the UN and handed responsibility to the Afghan actors. The Afghan government and power elites are divided. Some wish to participate in a transitional government, but President Ashraf Ghani is demanding new elections before power changes hands. The Taliban demand that all international forces must leave before they will re-start negotiations. In many ways, we are back to a situation where in order to get negotiations underway, there is a need for a neutral party of the kind the United States never was.

It is in everyone’s interests, including Norway’s, to see a negotiated solution to the armed conflict in Afghanistan. The potential emergence of a terrorist threat is less important than the enormous annual losses of human lives and the major humanitarian needs that the war creates, together with the loss of developmental gains and rights achieved over the past 20 years.

If the UN is to fulfil the role that the United States has handed to it, it will need capable negotiators and international and regional support. Norway is well positioned to act as a facilitator and motivator in this process. Norway is trusted by the parties to the conflict and is represented on the UN’s Security Council, where it was also recently appointed “penholder” for Afghan affairs. But time is short if 11 September 2021 is to mark a new start for Afghanistan, not just the conclusion of an international military operation.