Is Norway’s mission on the Security Council to reinforce the myth that climate change is a root cause of violent conflicts? This will make finding lasting solutions more difficult. 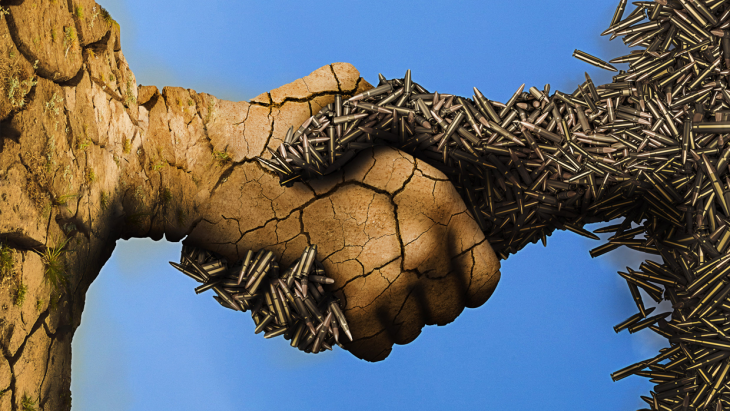 As a new member of the UN Security Council, Norway has identified climate security as one of four key thematic priorities to put on the Council’s agenda over the next two years. Russia and China, in particular, are sceptical about the relevance of climate change to peace and security, and Norway must now endeavour to win over these countries and other members of the Security Council to its view.

It is good that Norway is helping to place climate-related risks high on the international agenda, but this commitment is not free of controversy. An exaggerated focus on climate change as a cause of conflicts will tend to obscure the actual causes and prevent the responsible actors from being held to account. In this way, focusing on this issue risks contributing to the depoliticization of war and conflict.

We see this with the Sahel, which is frequently cited as an example of climate-driven conflicts in debates about climate security, including by Erna Solberg in her speech to the Security Council on 23 February this year. Although climate change has a potential impact on the risk of conflict, currently it is an insignificant cause of the crisis in the Sahel.

The reasons for the emergence of violent jihadist groups in the region are complex, but there are three particular causative factors: the radicalization of Islamists during the civil war in Algeria in the 1990s; NATO’s bombing of Libya in 2011 and the subsequent mobilization of Tuareg rebels; and bad governance and corruption in the countries of the Sahel region.

The latter factor is the main reason why jihadist groups have succeeded in recruiting thousands of rural inhabitants as warriors in countries such as Mali. Many Malians see these groups as a lesser evil than a corrupt government that is propped up by aid and military support from western countries.

At dawn on 23 March 2019, Dan Na Ambassagou militiamen attacked the village of Ogossagou in central Mali killing 175 Fulani inhabitants, half of whom were children. Since the militia are linked to the Dogon ethnic group, who are settled farmers, while many Fulani are nomadic herders, the international media were quick to present the attack as atypical example of escalating conflicts between farmers and herders due to population growth and climate change. For centuries, the Dogon and Fulani peoples have sometimes fought and sometimes cooperated over access to arable land and grazing in the area.

Now, however, these conflicts have escalated for political reasons. At the same time, there are more trees and better grazing in the area than has been the case for several decades. Many Fulani have joined jihadist groups and in general the Malian army is losing its military struggle against these groups, despite being in receipt of extensive western support. In 2018, these setbacks caused the army to start supporting militia groups by providing them with weaponry and training. The militias then attacked the civilian population. Over the past two to three years, approximately 2,000 Fulani civilians have been killed in such attacks, approximately 100 villages have been razed to the ground, and many thousand Fulani have fled to Burkina Faso. It would be interesting to ask these refugees what they think of the claim that they are climate refugees.

In her speech to the Security Council, Erna Solberg also highlighted Somalia as a country where climate change has contributed to recruitment to armed groups. But in Somalia too, focusing strongly on climate will overshadow more fundamental mechanisms underpinning violence and instability.

The conflicts in Somalia started in 1988 as the consequence of brutal attacks on the civilian population in the north by the country’s then dictator Siad Barre, but have evolved overtime. Today it is the jihadist group Harakat al-Shabaab that is battling forces from the African Union, the government (supported by Norway and other countries), and Somalia’s federal member states. Al-Shabaab wins popular sympathy because its Sharia courts and police forces combat criminality and create predictability, much assisted by inept security forces and the widespread corruption and clientism that permeates many of Somalia’s western-supported institutions.

To the extent that climate-related factors are relevant to the conflicts in these regions, it is because of politically controlled unequal distribution of resources and the political manipulation of property rights and resource management, rather than changing climate conditions in themselves. Of course, adverse climatic conditions also worsen humanitarian consequences of the fighting.

The solution to the conflicts in Mali and Somalia, as in many other places, thus does not lie primarily in investing in local climate adaptation, such as modern technology, drought early warning systems, or the phasing-in of more robust grain varieties, but primarily in building peace and security and strengthening the national government’s ability to provide services to local populations. Well-functioning institutions generate political trust, which in turn is crucial for lasting peace and development.

Most climate models predict that there will be more rain in the Sahel in the future, following the trend in recent decades. At the same time, rains will probably become less predictable and produce more severe flooding, challenging local livelihoods and prospects for economic development, and thus contribute to an increased risk of conflict. However, there is little research that concludes that climate has played a significant role until now in armed conflicts, compared to key political and socio-economic causes of conflict, and the latter factors are likely to remain the dominant determinants of violence and instability in the region (and elsewhere) in the foreseeable future.

We support Norway’s initiative to put climate security on the agenda of the UN Security Council, so long as it is founded on robust scientific knowledge and avoids contributing to reinforcing stereotypes and oversimplified narratives about ‘root’ causes of conflicts. For example, the initiative can contribute to illuminating how conflict, violence, and instability make societies much more vulnerable to the impacts of climate change.

In many areas, peacebuilding will be the most important measure to strengthen the ability to adapt to climate change and reduce the risk of famine and arbitrary violence. At the same time, Norway can play an important role in debunking the myth that African conflicts are driven by shortages of resources caused by population growth and climate change.