The 2021 EU-Belarus border crisis was preceded by a rapid deterioration of the already strained European Union (EU)-Belarus relations, in most part due to the Ryanair 4978 incident and the concomitant wide-ranging sanctions imposed by the EU on the authoritarian government of the Belarusian President Alexander Lukashenko, who has often been referred by the media as “Europe’s last dictator.”

What followed has been the creation of an artificial “influx” of migrants by the Lukashenko government, being pushed toward the neighboring borders of Poland, Lithuania and Latvia. Since June 2021, the Belarusian government has been facilitating the journeys of refugees and asylum seekers to Minsk, encouraging and navigating them to cross into the three neighboring countries by foot. 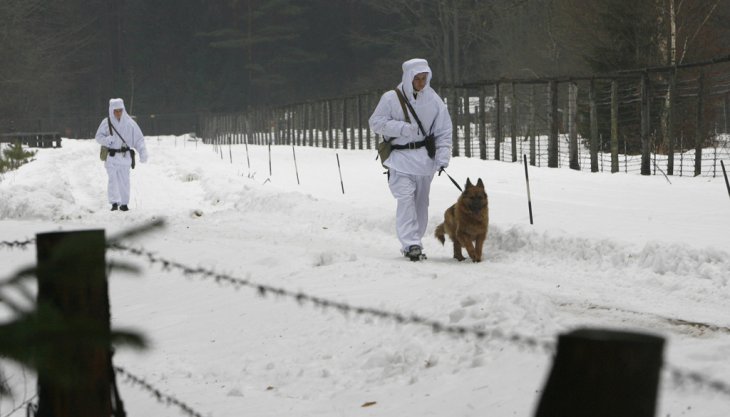 As a result, migrants are currently being violently pushed back and forth in no man’s land by border guards, perishing in sub-zero temperatures with no food, no water and no assistance from any humanitarian organization, unable to claim asylum or find refuge. According to reports, 7 migrants have died, at least 2 reportedly due to hypothermia and exposure to other elements.

This rapidly escalating “crisis” unfolding at the Belarusian border has further accelerated the militarization and securitization of migration in the EU, irrevocably polluting the discourse. This “influx” manufactured by Lukashenko and the extreme responses of the destination states have triggered a chain of events that is moving EU further toward the complete militarization of borders.

This not the first-time migrants have been instrumentalized to organize an “influx” for the end-goal of obtaining concessions or achieving political, military and/or economic objectives (e.g., 2020 EU-Turkey border crisis). However, the discourse surrounding the current crisis has somewhat been unique in its overt militarizing language referring to migrants as a “military tool” in Lukashenko’s “hybrid warfare” against the EU.

The “refugee crisis” of 2015 has exasperated the securitization and militarization of EU-wide migration policies, a phenomenon that is often, albeit contentiously, traced back to post 9/11 counter-terrorism measures. Various militarized schemes such as EU Navfor Med Irini and the ever-expanding mandate of Frontex are among the many symptoms of this process. The increasing militarization of EU borders have been accompanied and reinforced through the securitized language used by the media and European politicians.

As securitization is not a linear process but rather a spiralling phenomenon involving many variables, that both “self-fulfils and reinforces migration-security nexus dynamics.” (Bello, 2020), to attribute this process to media coverage and politicians alone would be an over-simplification of the issue. Nevertheless, for the purposes of this piece, the tragedy at hand will be approached within the context of these main factors.

Beyond the humanitarian tragedy at hand, the very troubling rhetoric being thrown around this crisis can have far-reaching implications across the EU. This language loaded with war analogies adopted in the media and the unilateral declarations of EU leaders is problematic in on itself, as it leads to a warped framing of a non-traditional security issue as a military threat.

However, this framing has even more alarming, immediate effects that have already led to casualties which are at large being perceived as little more than collateral damage in the wider diplomatic row between Lukashenko and the EU.  The term “hybrid warfare” being so freely used by EU politicians in reference to this crisis leads to a sense of protracted state of emergency that enables the receiving states to respond with and justify increasingly violent and extreme “war-time” measures.

Categorizing migration as a security issue posing a threat to national security and the sovereign borders of a state will bring with it the measures, resources and the violence that would be accorded to it.

… war-time measures have revealed themselves in many forms …

These war-time measures have revealed themselves in many forms as the governments of Lithuania, Latvia and Poland have seized this opportunity to operate out of bounds and in violation of their obligations under international refugee law.

All three governments have declared a state of emergency along their borders, creating an extremely precarious blind-spot barring journalists and aid workers from operating in the area. In September 17, 2021, two Polish journalists were charged with violating the state of emergency decree for covering the crisis at the Belarusian border.

This obstruction of access not only leaves the refugees at the border stranded with no hope of receiving any form of life-saving assistance but also decreases the visibility of the state crimes being committed from the wider public. Amid violent pushbacks, this state of emergency has enabled the three neighboring countries to violate one of the most fundamental principles of international law, which is the right to seek asylum. As a part of these “extraordinary responses”, the Lithuanian government has  introduced significant amendments to its asylum system, many of which are in direct contradiction to Lithuania’s obligations under international law.

For EU leaders and Belarus’s neighboring countries to redefine refugees as tools of warfare and not highly vulnerable people in an extremely precarious situation, not only dehumanizes but also creates a narrative in which these refugees, relatively few in numbers, have the capacity to destabilize and pose an existential threat to the EU borders.

Accordingly, the response from other EU states have also been toward border militarization.

Denmark, who has been known for its hostile migration policies following the 2015 “crisis”, has pledged 15 kilometers of barbed wire enforced with razor like blades to bolster Lithuania’s border wall with Belarus. Poland has followed suit in October 2021, as the Polish MPs have approved the draft legislation for a €350 million wall on the Belarusian border. In addition, Poland currently has 12,000 soldiers deployed in the border region.

There are already indications that these measures might become the norm as the Polish Interior Minister has declared that they seek to extend the state of emergency at the border for another 60 days.

… the language of warfare has never been so prominent …

Even though previous incidents where migrants have been used as “playthings of geopolitical interests” have received international backlash, the language of warfare has never been so prominent. This may partly be attributed to an EU-wide fear that a “second migration crisis” can be on the horizon due triggered by an “influx” of Afghani refugees fleeing from the recent Taliban takeover.

Aside from incredibly problematic and volatile immediate militarized responses, this state of warfare, if normalized, will move on to shape long-term policies and legislation that have no place within the context of refugee protection.