On October 21, the UN Security Council (UNSC) held its annual Open Debate on Women, Peace and Security (WPS) under the presidency of Kenya, one out of ten members of the UNSC that was elected to serve by the UN General Assembly (a so-called E10 state). Kenya has joined forces with two other elected members, Ireland and Mexico, in a ‘troika’ to jointly push for WPS as these states hold three executive presidencies in the Council this autumn.

While important research has been conducted on the central role of women’s civil society organizations for establishing and promoting WPS, we know less about the role of elected states in the UNSC. What we do know is that individual E10s have played key roles in the adoption of UNSC resolutions on WPS – from Namibia in 2000 and onwards – and in efforts to realize the content of the now 10 WPS resolutions. Moreover, while there is good reason to believe that these states’ collaboration and exchange with civil society actors has been central to E10 WPS efforts, our knowledge of such “E10-civil society engagements” is even more limited. 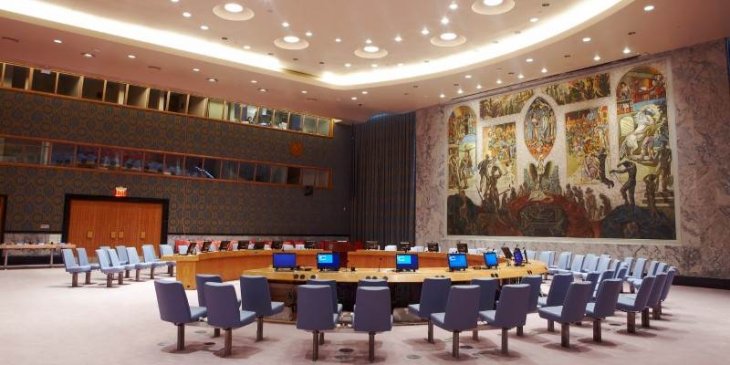 This blog post seeks to promote further policy-scholar exchange and research on this topic by centering in on the conditions under which an E10 operates in the Council, and on the role of what we can call positive E10-civil society engagements – that is, where, why, and how an E10 and civil society actors either directly collaborate or deliberately build on each other’s efforts to promote WPS. This blog post is based on a report studying Sweden’s 2017–18 UNSC term which collects existing research, in-depth interview material, and data capturing WPS developments.

What does it mean for an E10 to operate in the UN Security Council?

The UNSC is the highest decision-making body internationally. The tempo and workload are very high and the climate is harsh. As such, it is a costly arena to maneuver for an individual E10 state.

What does the Council produce? Two core outcomes are resolutions and statements. That might not seem very impressive. In addition, these outcomes are produced through negotiations. Here, it is important to remember that an elected member constitutes one out of 10 elected states. In addition, there are five states that have a permanent seat, the so-called permanent five (P5): China, France, Russian Federation, the United Kingdom, and the United States. Through their long-term presence they have procedural control and they possess the power of a veto. This means that each member, but particularly elected members, will have a limited impact on each issue or problem discussed in the Council. But if a state manages to suggest and get all to agree on, for example, concrete and action-oriented language in a resolution, then that can have critical effects in the lives of people in conflict areas or on the personnel that the UN deploys around the world. There is always someone on the receiving end of the Council’s decisions. If we scrutinize this situation even more in-depth from a WPS perspective, this also means that the content of each decision is key for understanding how it can affect the lives of women in conflict areas. This is critical, as we know that WPS in part came out of the fact that the UNSC did not explicitly or systematically consider women’s security, women’s agency for peace, or the impact of war on women, prior to 2000.

How can an E10 work to promote WPS during its (short) time in the UNSC?

An elected member serves on the UNSC for two years. What objectives an E10 can seek to achieve on WPS during its rather short timeframe is a complex question, particularly if we remember that each decision in the UNSC is the outcome of a negotiation.

That said, if we simplify, we can say that an E10 can strive to affect three key areas: 1) The normative resolution framework that, in a way, forms the WPS mandate of the UNSC; 2) the processes through which the Council operates; 3) the content of regular UNSC decisions in order to have a positive impact on the security and participation of women in a conflict area. 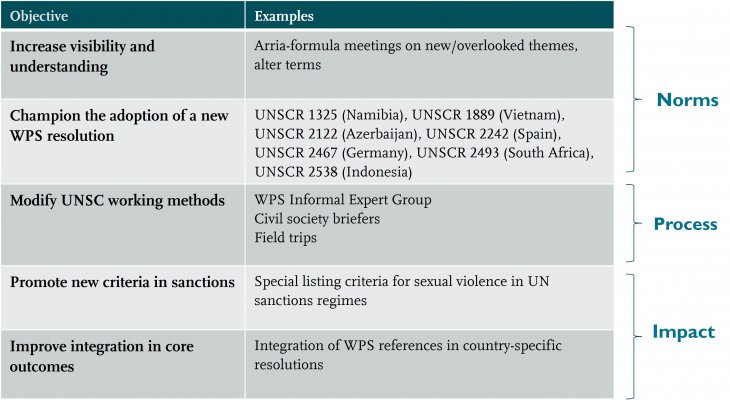 Let us look a bit closer at these objectives, starting with the first: affecting the norms set in the WPS resolution framework. An E10 can try to affect the framework in several ways, for example:

This can involve promoting dialogue and debate on an overlooked WPS aspect or raising issues regarding the terminology that is being used to describe a problem, for instance to move away from using terms such as victim to instead using the word survivor. In practice, examples of what this can entail can be to arrange an Arria-formula meeting or, if the country holds the UNSC presidency in October, suggest a theme for the annual Open Debate on WPS. In such efforts, E10-civil society engagement can involve collaboration to identify existing gaps, exchange information and ideas, or to identify briefers.

Champion the adoption of a new WPS resolution

An E10 can also strive to address potential gaps in the thematic framework even more directly by championing a new resolution. As we can see from the figure, a number of WPS-related resolutions have been adopted under an E10 presidency or have been promoted by E10s.

Recently, however, there are arguments raised that the WPS framework should be considered as rather well-developed and that we should try to move toward implementing existing decisions. This is a position forwarded by many civil society members.

One way to move toward implementation is to strengthen and modify the processes under which the UNSC operates and makes its decisions. This is the second area where an E10 can seek to have an effect.

The UNSC operates by rules and established practice, that is, by formal and informal working methods. While these methods are resistant to change, it is possible for an E10 to strive to modify the processes so that these can become better at consistently addressing WPS. For example, we have seen a growing practice of inviting in civil society briefers to the Council debates, something which can be used to give women’s organizations from conflict areas a direct voice in ongoing UNSC discussions. There have also been efforts made to modify how the UNSC field visits are arranged in order to ensure that members meet with women’s organizations. As captured, these efforts can directly and indirectly involve engagement between E10s and civil society.

The third area where an E10 can seek to have an effect is by trying to improve the chances for a positive impact in a conflict-affected country directly by seeking to integrate WPS in regular UNSC decisions.

Sanction regimes have become an increasingly common tool used by the UNSC. There have been systematic efforts to integrate criteria in sanction regimes that take WPS aspects into account. For example, Sweden promoted special listing criteria for sexual violence in several UN sanctions regimes.

Finally, an E10 can work to support the integration of the content of the WPS resolutions into some or all regular UNSC outcomes – resolutions, presidential statements, press statements, and press elements – where resolutions can be seen as having the largest potential for a positive effect in the conflict area. For example, Sweden worked to make WPS “core Council business” by striving to integrate language on WPS in resolutions and statements.

As regards impact, E10-civil society engagement can involve jointly identifying central areas where there is need for stronger formulations on WPS in a specific country situation – something which requires concrete and detailed information. It can also involve political and social pressure for change.

What does this tell us about the where, why, and how of E10-civil society engagement? 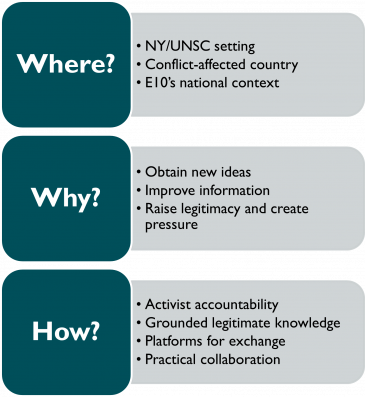 Where does it take place?

Why do E10s and civil society engage?

The reasons can be many. Over time, we have seen direct collaboration or efforts to jointly build on each other’s work in order to:

How do E10s and civil society engage?

There exist a range of different approaches, of which a few are visible in our report:

As this blog post has demonstrated, there exist a number of entry-points for further research and policy-research exchange on the role of E10-civil society engagement that would allow us to move forward on understanding both the dynamics of the Council and the role of such engagements in the trajectory of WPS. While this post has limited its focus to positive engagements, further research should additionally recognize that neither the E10 group nor civil society are homogenous and that interests do not always align. There exist many tensions, and also often outright heated engagements, in various E10-civil society constellations in the UNSC context that are relevant to study. That said, centering in on positive engagement was here used as a way to structure one form of insights that are relevant for research on WPS and that can serve as a starting point for studying engagements when promoting other cross-cutting themes on the UNSC agenda, such as climate, youth, or health.

This blog post is based on research reflections developed for the Nordic Africa Institute (NAI)/PRIO/University of Pretoria webinar Looking Back and Reflecting: Sweden’s Engagement with Civil Society in 2017-18 on October 12. The webinar also included presentations by Per-Axel Frielingsdorf, Counsellor, Former Co-chair, Informal Working Group-WPS and WPS Lead, Swedish Permanent Mission to the UN (2017–2018), Klara Backman, Advocacy Advisor, Kvinna till Kvinna (a recording of the event can be found in the link). Olsson’s blog and research reflections are based on the PRIO Paper: Sweden as an Elected Member of the UN Security Council: Promoting Women, Peace and Security as Core Council Business, 2017–18, the NAI-led project Shattering Glass, in which PRIO collaborates with NAI and the University of Pretoria, and lessons from the Dialogue Forum or Norway’s membership in the United Nations Security Council, conducted in cooperation with NUPI.