The guns have so far remained silent on the snow-covered Russian-Ukrainian border, but there is certainly no peace there; a rather unusual war is in progress. It is unlike any other wars waged by Russia under the lengthy rule of President Vladimir Putin, who began his first presidential term with a war in Chechnya that was officially defined as a counter-terrorist operation.

The present confrontation goes beyond Russia’s track record of “hybrid” attacks, like its interference in the 2016 presidential elections in the United States, or its limited foreign interventions, like the ongoing mission in Syria. 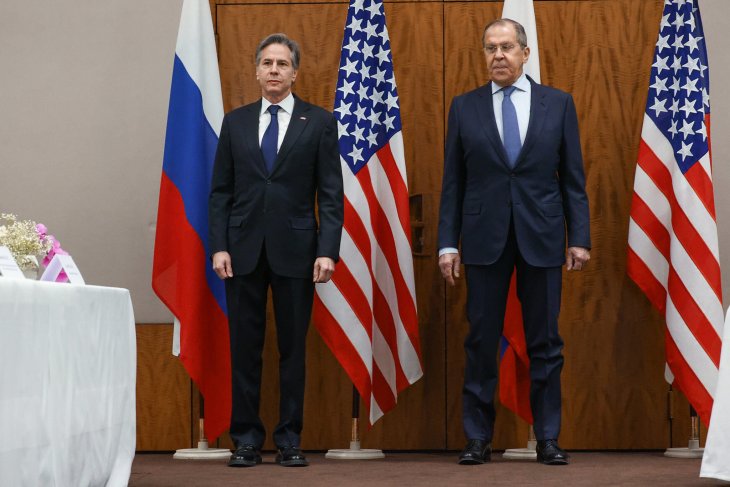 The stakes are far higher than in all of Moscow’s previous experiments with power projection, as if Putin has concluded that the time has come to resolutely challenge his main adversaries — the US and North Atlantic Treaty Organization (NATO).

This unprecedented challenge can perhaps be described as a “blackmail-war”; and while the key target of these military threats is Ukraine, Russia’s demands are addressed first and foremost to US President Joseph Biden, whom the Kremlin sees as bedeviled by domestic troubles and frustrated with the need to manage crises in Europe that preclude him from being able to concentrate on the confrontation with China (Russiancouncil.ru, January 19).

Indeed, Lavrov and his deputy, Sergei Ryabkov, are not conducting diplomacy to lay the ground work for some sort of agreement; they are executing a propaganda offensive (RBC, January 21; TASS, January 19). Russian diplomats are not given any mandate for deal-making and are quite probably completely unaware of the consequences of their deliberately counter-productive efforts (Rosbalt, January 19).

The main purpose of these un-diplomatic demarches appears to be to demonstrate Western hostility to Russian “legitimate” concerns.

Their signals of reluctant readiness for new meetings do not reflect  any expectations that the European security architecture will be reconfigured to grant Russia a more prominent status than in the old consensus-based Organization for Security and Cooperation in Europe (OSCE), which is often critical of Moscow’s disregard for international norms (Forbes.ru, January 17). The main purpose of these un-diplomatic demarches appears to be to demonstrate Western hostility to Russian “legitimate” concerns (Rossiiskaya Gazeta, January 21).

Lavrov and his lieutenants in the foreign ministry expatiate on threats from NATO infrastructure and missiles, but keep quiet about the high-impact weapon Russian has already deployed in support of its ultimatums — the constrained natural gas export to Europe (Nezavisimaya Gazeta, January 16). Endless arguments about certifying and launching the Nord Stream Two pipeline camouflage the real problem — the vulnerability of many European states, first of all Germany, to Russia’s threats of cutting the supply (Kommersant, January 18).

While the Kremlin has accumulated solid financial reserves to fortify the Russian economy against possible super-sanctions, Europe is already struggling with volatility on its energy markets. Gazprom continues to carefully deliver on only the minimal level of its contractual commitment, which has left gas storages in Germany nearly empty in the middle of winter (Gas-&-Money, January 19). Russian markets still experience jitters after each political show of resolve, but Putin’s courtiers radiate confidence that Russia will demonstrate greater economic resilience to all possible sanctions compared with European sensitivity to further energy price jumps (Izvestia, January 21).

The gradual gas squeeze is accompanied by notable restraint in cyber “special operations”, except for the sudden but singular cyberattack on Ukrainian government websites earlier this month (Grani.ru, January 14). Moscow is even showing readiness to cooperate in punishing ransomware criminal activity, and several hackers involved in the REvil gang have been detained at Washington’s request (RBC, January 16).

This moderation stands in contrast with the vicious Russian propaganda campaign, which portrays NATO as a “cancer” and accuses the West of spreading “toxic lies” (Argumenty i Fakty, January 18; RIA Novosti, January 22; see EDM, January 21). Seeking to undermine Transatlantic unity, Moscow asserts that only direct talks with the US can yield results because the European states have no influence on managing the Ukraine crisis and merely follow the course set in Washington (Izvestia, January 21). At the same time, the Russian media eagerly amplifies opinions regarding Germany’s reluctance to allow exports of armaments to Ukraine (Russiancouncil.ru, January 22).

Every hint regarding possible disagreements among allies in Biden’s statements and every reference to the need for setting a European channel of dialogue with Russia in French President Emmanuel Macron’s discourse is presented as evidence of discord inside NATO (Svoboda.org, January 18).

The main addressee of these messages may be Putin himself, who wants to believe in Western disunity and, by sustaining military pressure on Ukraine, aims to aggravate the reluctance of many European countries to face extra burdens or risks (The Insider, January 18). Constant troop movements and exercises produce a daily flow of news that alarm the Europeans about the inevitability of war, while ordinary Russians remain largely unaware of this buildup and so tend to see the situation as just another quarrel (Riddle, January 18). Russian experts refrain from speculating about the “military-technical measures” promised by Putin a month ago (Kremlin.ru, December 21).

The re-deployment of heavy military hardware from Siberia closer to the Western theater adds to the capacity of the assembled grouping of forces to conduct a deep offensive operation (see EDM, January 20), but it seemingly falls shy of meeting Putin’s ominous promise (Novaya Gazeta, January 20). Nuclear saber rattling has so far been mostly kept in reserve, but the Kremlin leader may sooner or later resort to some tangible reminders about Russia’s superior might, for instance by ordering a test of a nuclear-capable weapons system.

Nuclear saber rattling has so far been mostly kept in reserve…

The need to climb up another step on the proverbial escalation ladder is accentuated by the fact that Putin’s blackmail-war has so far been manifestly unsuccessful. With every passing week, NATO’s outward resolve grows to firmly and collectively counter every possible Russian move into Ukrainian territory; several allies have been delivering planeloads of military aid to Ukraine, defying Moscow’s demand to curtail such ties.

A new round of strategic arms control talks could be opened with Washington, but this would hardly suffice for the Kremlin to save face after having pompously declared that its maximalist demands are non-negotiable. Putin cannot pin the blame on the diplomats, who followed his orders to the letter, or on the top brass, who refrained from war-mongering but ensured the combat readiness of the battalions deployed in inclement winter conditions.

The responsibility for delivering Russia into a no-win position is his alone. And while starting a full-blown and high-risk war is surely against his better judgement (clouded by delusions and fears as it may be), a humiliating back-pedaling is a non-option. What the beleaguered autocrat needs is a lucky break in the stand-off — or perhaps some kind of nuclear surprise to turn the tables on the US and NATO.