It’s easy to condemn the opposing party in a polarized situation.
But it’s more difficult to exercise self-criticism. 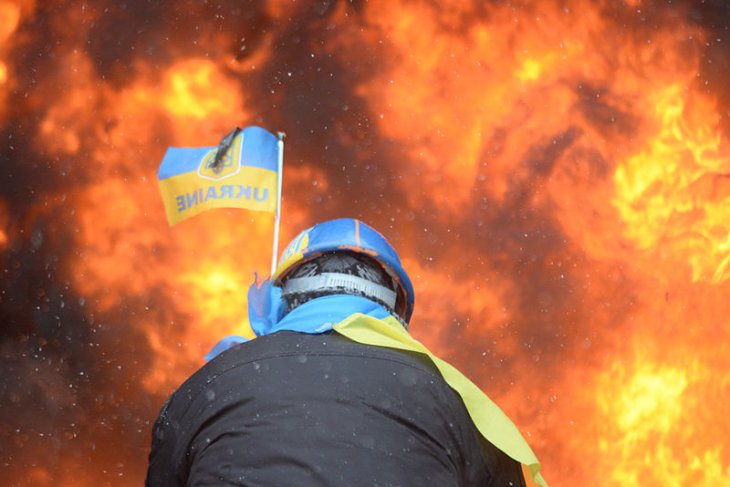 It’s easy to condemn the opposing party in a polarized situation. Particularly when there are good reasons for such condemnation, as in the current situation. It’s easy to state that Russia’s lust for power and its violation of international law are abhorrent. It’s more difficult to exercise self-criticism. So let’s take a closer look at the process that led Europe into this predicament and examine what’s been happening in our own backyard.

King of the hill

First, a quick recapitulation of the narratives. The Russians base their narrative on Western promises, dating from the end of the Cold War, that NATO would not expand eastwards. The Western narrative is based on the desire of Eastern European countries to position themselves as part of Western civilization.

If the cooperation that existed at the start of the 1990s had continued – for the first time since 1946 the UN Security Council functioned as prescribed in the UN’s founding documents – perhaps then the security and civilizational considerations could have been unified.

But the Kosovo War in 1999, the bombing of Serbia to liberate Kosovo, narrowed a window of opportunity that had already begun to close. What happened next is well known.

Western institutions were extended eastward in an extensive multilateral process, some as far as Central Asia. This diplomacy received a warning shot, however, when neoconservatives took over the White House in 2001.

Now the United States was the undisputed king of the hill. There was no one to oppose them. The new administration did not consult with other governments the way President Clinton had done.

There was no reason to pay particular attention to the Russians, because they had fallen by the wayside and were incapable of any major action. Few people had any misgivings until Vladimir Putin addressed the Munich Security Conference in 2007. Putin rejected the Western narrative. Had things gone too easily?

At that time, the Americans had begun to refer to spheres of interest as something outmoded, alleging that such spheres were something that belonged to the Cold War. But the concept had always existed. And the praxis as well.

What was special at that time was that there was only one sphere of interest: the American sphere.

What was special at that time was that there was only one sphere of interest: the American sphere. And to counter the growing interest of emerging powers in the same thing, there was an attempt to brand the phenomenon as old-fashioned. Many took the bait. This became clearly apparent during the Georgia conflict in 2008.

The United States wanted NATO to expand eastwards into Ukraine and Georgia, but encountered resistance from Germany and France, among others. A NATO meeting in 2008 agreed on a compromise: these countries were promised that they “will become members” at some unspecified time in the future. No roadmap to membership was offered, however.

Previously, both the EU and NATO had said to the other Eastern European countries that they must decide for themselves where they wanted to belong. The two organizations would grant membership to all countries that fulfilled the necessary criteria. Now, however, some countries were applying the brakes.

This was also true in the United States. It was there that qualms were most clearly expressed. American proponents of realpolitik issued reminders that Russia had legitimate interests in Ukraine and Georgia.

They were blunt in asserting their views. Six years later, when Russia annexed the Crimean Peninsula and provided support to Ukrainian rebels, former US Secretary of State, Henry Kissinger, warned against all attempts to link Ukraine to one side or the other.

The country’s history and location recommended that Eastern and Western powers should see it as a gateway to the other side. Today, however, this strand of realpolitik in American policy has been severely weakened. Many of its practitioners have died or are dying out. They were represented most strongly in the Republican Party, but that has now been transformed into something unrecognizable.

The EU’s role in this story does not put this organization in a favourable light either. The question of Ukraine’s economic affiliation came to a head in a particular turbulent political period in Kiev in 2013. José Manuel Barroso, the then President of the European Commission, pointed out that a country could not belong simultaneously to a customs union (with Russia, Kazakhstan and Belarus) and a comprehensive free trade agreement with the EU. A choice had to be made.

The result was an association agreement with the EU and an economic win for Ukraine. The downside was that Russia was not consulted. This was a reminder of the EU’s lack of capacity and experience in matters of foreign and security policy. The fact that the United States involved itself in establishing a new government in Kiev was also not particularly constructive.

Ukraine was turned towards the West. The naval base in Sebastopol became an issue. Then came the Russian reprisal, and Ukraine broke apart.

Forced into an uncertain future

In the Helsinki Accords (1975), the parties undertook to respect each other’s choices of social, economic and political systems. The Paris Accords of 1990 recognized every country’s right to determine its security policy affiliation.

Crimea is, and will continue to be, in Russia, as most of its inhabitants wanted.

For Ukrainians, this was not an easy matter. On the one hand, because they were not united in agreement. Crimea is, and will continue to be, in Russia, as most of its inhabitants wanted. And after eight years of trench warfare, we cannot expect the separatists in Donbas to turn towards the West. On the other hand, there was no agreement in NATO about granting Ukraine membership.

A prospect that was pushed into an uncertain future in 2008 seems even more distant now.

When Russia was gearing up for the current crisis, it made Ukrainian NATO membership a red-line issue. It insisted on a formal guarantee that it would not take place. In response, the West cited the principle of a country’s right of self-determination for its security policy .

Red lines and principles can easily come at the expense of flexibility and expedience. This is not promising for the sequel.

The West’s deliberate or sub-conscious exploitation of Russia’s weakness, the EU’s treatment of an associate agreement as an internal affair, the weakening of the realpolitik strand in American politics, and the parties’ parading of principles are important parts of the background to the current crisis.

They exercised statesmanship. But that time was long ago.

The contrast with the United States’ handling of the end of the Cold War and the collapse of the Soviet Union – a time when President George H.W. Bush, Secretary of State James Baker and National Security Advisor Brent Scowcroft were in the driver’s seat – is striking. They exercised statesmanship. But that time was long ago.

Sverre Lodgaard is Senior Research Fellow Emeritus at the Norwegian Institute of Foreign Affairs (NUPI). He has been Director of NUPI (1997-2007) as well as Director of PRIO (1997-1992).