I, along with many other commentators, believed until the very end that war in Ukraine was preventable and would ultimately not take place. Very sadly, and concerningly, I was wrong. Why did I hold out hope so long for the avoidance of war? What does the invasion of Ukraine tell us about Putin’s regime? And how should the West respond? 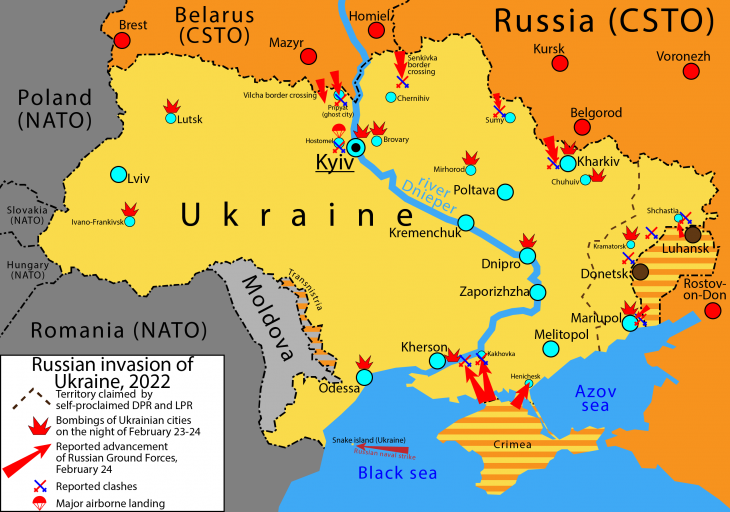 No rational case for war?

Why did I believe a conflict on the scale we are now seeing would ultimately not come? Here, there are three considerations. First: corruption. Corruption and personal profit-seeking are ingrained in the Putin regime. Such a regime has many reasons to be risk-averse, especially when it comes to launching into an unpredictable and bloody foreign conflict.

Second, Russia seems too economically vulnerable to wish to enter into an undertaking of this kind. The Russian economy is thoroughly interconnected with its neighbours and the rest of the global economy. This makes the stakes of economic sanctions very high. There is also the economic burden both of a protracted military conflict and possible occupation of a country as large as Ukraine, and of taking on the administration of economically weak regions such as Donetsk.

Third, we simply have not seen the mobilisation of popular support for this war that we saw, for example, surrounding the war with Georgia in 2008 or the annexation of Crimea in 2014. It was my assumption that Putin would wish to drum up some jingoistic sentiment before sending Russia into such a devastating situation.

On the basis of these assumptions, it was my judgement that we would not find ourselves where we are today. These assumptions have proven wrong, and this tells us something important about the manner and extent to which Putin’s Russia has mutated in recent years, and its direction of travel.

Putin’s regime, which initially seemed to stand for some form of modernisation, if within the parameters of authoritarian rule, is utterly transformed. It now fights only for its own survival. This is a dangerous tendency.

Putin has made little attempt to bang the drum for war, and one suspects that he is convinced that popular apathy will be sufficient in lieu of enthusiastic popular support. It remains to be seen if he is correct.

Meanwhile, we seem to be witnessing a shift in dynamics within the Russian political elite. The apparent absence of dissenting voices within the Russian political establishment is striking. The surreal theatre of Putin’s speeches in recent days and the televised security council meeting seems to belie an insecurity on Putin’s part about possible dissension in the ranks. Why else put on such a show of unity and dominance?

At the same time, that so astute a career diplomat as Sergey Lavrov can be seen parroting abrasive pronouncements seemingly dictated directly by the Kremlin, tells us something about the way Putin has even further consolidated his grip on the apparatus of power within Russia.

All pretence of an eventual integration of Putin’s Russia into the European security system has been exposed as a dead end. The Russia that has emerged fully into the daylight in the last days is one whose interests are antithetical to broader European security interests and on a collision course with Europe and the West.

This is as much an issue of values as it is of bare power politics. In its current survival mode, the Putin regime is threatened by every critical pronouncement on its conduct issuing from democratic countries. This is evident from the efforts Putin has gone to to shut down independent media and communication channels and to label Russian civil society entities that receive support from abroad as treasonous.

No adequate response without risk

Putin is not a risk-taker; he is not a gambler. His motivations may be paranoid, but his actions are calculated. In willfully escalating this eminently avoidable and unnecessary conflict, he has taken for granted that Ukraine’s integrity as a sovereign nation state is fragile and apt to fragment, and that the West will similarly be unable to act decisively and in a unified manner to oppose Russian aggression. On both fronts, he is liable to have miscalculated. The war will likely not go to plan.

But there is little comfort in this fact for Europe and the West. On every occasion that Putin has been confronted by the illegitimacy of these assumptions, he has chosen to double down. Similarly, he is likely to react strongly to any and all Western push-back.

There are very real grounds for concern about such reactions. One point of leverage at Putin’s disposal is gas export. The partial and likely ultimately complete interruption of gas exports from Russia will affect Europe, having an impact both on energy supply and markets.

Another, more worrying line of response is for Russia to brandish its status as a nuclear power. While I am not immediately concerned about the risk of nuclear strikes, we will very likely see such measures as the resumption of nuclear testing or the redeployment of non-strategic nuclear weapons to significant locations such as Kaliningrad. Clearly, this nuclear aspect of Russia’s response is of grave concern and could threaten to escalate the conflict in unpredictable and potentially catastrophic ways.

The West must nevertheless find ways to decisively respond to the situation in Ukraine. Two points are particularly important: the West must find ways to connect with the Russian people, amplifying the voices of those in Russia who oppose war and pushing back against the regime’s disinformation; and it must find ways to support Ukraine, if possible by directly supplying arms to Ukrainian military forces.

European security, predicated not only on mutual national self-interest but upon shared democratic values, is incommensurable with an expansionist authoritarian and autocratic state on Europe’s doorstep. A strong response from Europe and the West is essential to the integrity of European security efforts. But the risks of such a response are real and must not be downplayed.

Pavel K. Baev has decades of experience as a researcher and commentator on Russian affairs. Before joining PRIO in 1992, he was head of the section for military-political studies of the Institute of Europe in the USSR Academy of Sciences.