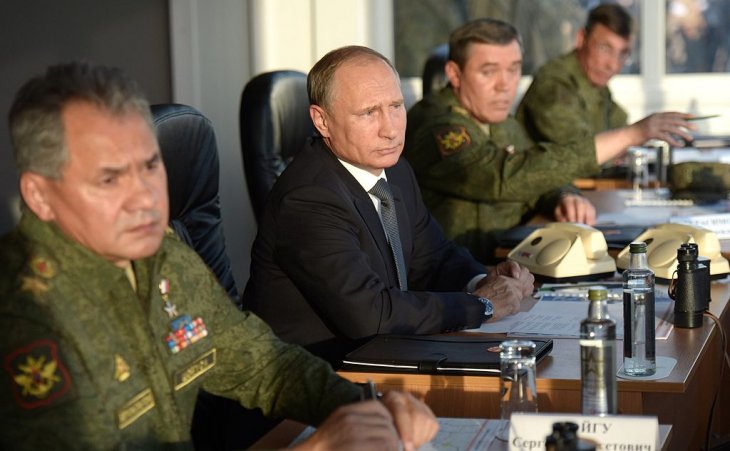 The massive invasion into Ukraine constitutes the most kinetic of them, but on the highest level Putin imagines a multi-dimensional set of contestations with the USA, NATO and the EU for reshaping the European and even global security order (Russian International Affairs Council, March 2).

This inflamed ambition has overruled all remotely realistic assessments of own strength and the enemy’s weaknesses, so none of the fast-moving wars is going well for Russia.

The diplomatic offensive has registered the most crushing defeat as the UN General Assembly approved the resolution condemning Russian aggression with only four votes against (Belarus, North Korea, Syria, and Eritrea), while China showed its disapproval by abstaining (Izvestiya, March 2).

Foreign Minister Sergei Lavrov sought to explain away this fiasco by blaming US in resorting to blackmail, but it is rather hard to believe that states like India, Iran or South Africa (notable among 35 abstentions) could succumb to blackmailing (RIA-Novosti, March 3).

The main premise behind Lavrov’s sustained pressing the clearly unacceptable demands in the strikingly vulgar way is that the Western unity cannot withstand the threat of war with pronounced nuclear overtones (Ezhednevny zhurnal, February 28).

The nuclear risks have climbed yet higher with the attack on the Zaporizhzha nuclear plant last Friday, which Moscow tries to present as Ukrainian sabotage (Nezavisimaya gazeta, March 4). The extraordinary meetings of NATO foreign ministers and the EU Foreign Affairs Council strongly condemned Russia’s reckless operations, so Lavrov’s hopes that “our Western partners” would soon get over their ”hysteria” find no supporting evidence (TASS, March 3).

Instead of plunging the West into disarray, Russian aggression has produced a powerful unifying momentum consolidated by the US leadership and augmented by remarkable shifts in security policy of many European states, first of all Germany (Rosbalt, March 3).

The EU has found resolve for unleashing a total economic war against its main supplier of natural gas, and Russia is taking far heavier losses than it has budgeted for. The government had performed some stress-tests in anticipation of interruptions in the SWIFT system of financial transactions, but it wasn’t remotely ready for the massive punishment, so its fiscal counter-measures have proven to be ineffectual and misdirected (Kommersant, March 3).

Moscow’s working assumption was that the accumulated financial reserves would suffice for neutralizing the immediate damage, but the breakdown of crucial supply chains cannot be compensated by emergency funding, while the coffers have been depleted by well-targeted sanctions (Publico.ru, March 3).

It is not the mid- or long-term effects of Western economic blows that are shaking the Russian government, but their immediate impacts

It is not the mid- or long-term effects of Western economic blows that are shaking the Russian government, but their immediate impacts, most of which are unexpectedly shocking and cannot be mitigated by trade with China (Republic.ru, March 3).

Russian domestic air traffic is set to be grounded because the leasing agreements are cancelled and the fleet of Boeings and Airbuses cannot be serviced (Kommersant, March 5). Western companies are closing their businesses in Russia, so the Moscowites rushed in great numbers to make the last purchases at the IKEA hypermarkets, which added to the continuing public run on the banks (Novaya gazeta, March 4).

Supply shortages and sharply falling incomes are inevitably influencing the domestic support for the war, which the maximum-volume propaganda campaign fails to boost, because even the harshest measures against dissent cannot cancel the daily encounters with grim reality (Rosbalt, March 3).

It is not surprising that most independent media platforms are either closed or forced to curtail the coverage of the military campaign; what is surprising is the delay with the introduction of severe censorship, so that the flow of news in the crucial first days of the invasion was unaffected (Republic.ru, March 4).

The shock of discovering the shameful truth about the war cannot be undone, so Moscow has effectively lost the information war not only in the international arena but also at home, as public opinion keeps absorbing the news about expulsion of Russian teams from major sports and expanding cultural boycott (Kommersant, March 3).

After many “hybrid” operations targeting various Western vulnerabilities with such innovative tools as “REvil” hackers or “Wagner” mercenaries, Russia has found itself on the receiving end of a multi-prong “hybrid war”, and its counter-strikes, like the closure of airspace for transit flights to Asia, tend to backfire (Meduza, March 4).

What must be particularly painful for Putin, is that his personal war against Ukraine’s President Volodymyr Zelensky has yielded a disaster that no amount of adulation from his courtiers can hide.

Inexperienced as he is, the commander of Ukrainian resistance has grown into a heroic leader, who can speak truth to his nation and address the European Parliament with demands for greater support – and receive a standing ovation for that (News.ru, March 2).

Putin’s reputation as a calculating schemer has plummeted not only because of his blatant lies and historical absurdities but also because of the starkly exposed incompetence in planning and executing the military campaign, guided by his blind belief in Ukraine’s inability to defend its sovereignty (ThePage.ua, March 2, originally published but no longer available at Moscow Echo).

Even the mainstream military commentators in Moscow begin to concede, carefully and elliptically, that the long-prepared blitzkrieg has failed and in the protracted conflict, Ukraine is gaining strength and time works not in Russia’s favor (Nezavisimoe voennoe obozrenie, March 3; EDM, March 3).

Putin’s reassurances that the invasion goes “according to plan” depart from the reality of stalled offensive and brutal bombardments so far that his leadership increasingly resembles the behavior of a cornered rat (Kommersant, March 5; Svoboda.org, March 2).

In the coming days, the deeper Russian troops remain stuck in the mud of a single supply line leading to Kyiv and in the quagmire of street-fighting in Kharkiv’s suburbs, the less will Moscow be able to threaten NATO with escalation to other theaters, for instance, in the Baltic, and the less interesting the proposition for rescuing the strategic partner in need will be for the Chinese leadership. Ukraine’s courage and stamina for absorbing a few more local setbacks that only bring the eventual victory closer are in no doubt; Russia’s capacity for surviving the looming disaster of defeat increasingly is.