Photos, stories and videos featuring victims of the war in Ukraine are spreading all over the world on social media. This will change our perception of war. 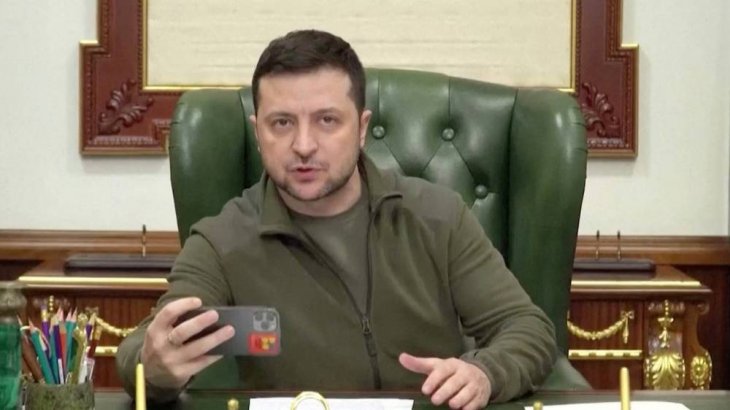 The Ukrainian government is embracing social media platforms and is doing everything it can to keep them accessible. Photo: President of Ukraine Official Website / Reuters

So far, cyber attacks and cyber operations have played a smaller role than expected in the warfare in Ukraine, social media on the other hand, have been more significant. Ukraine and the global tech giants are exploiting each other to mutual advantage in this war.

Ukraine’s use of social media and technology shows the importance of establishing narratives by disseminating information. Effectively, we are seeing a new form of “weapons of the weak”.

These new weapons have provided President Volodymyr Zelenskiy with an effective means of boosting resistance.

A dark decade for social media

The past decade began optimistically in 2011 with the use of social media in the run-up to the Arab Spring.

But the pendulum swung. Social media apps became surveillance tools for authoritarian regimes. By 2012, the protests had either been suppressed or morphed into civil war.

In addition, the genocide in Myanmar, the efforts to influence voters during the Brexit referendum campaign in the United Kingdom and the 2016 election campaign in the United States, as well as “fake news” and tendencies towards polarization have provoked much strong criticism of the global tech giants. Perhaps now they have an opportunity to appear in a better light.

There has also been an important development since the Arab Spring and the current situation appears quite different as a result.

As a result, more people are able to create and view content. Another factor is that people all over the world, particularly younger generations, have become more accustomed to receiving news coverage via social media.

… history is being live-streamed.

Photos, stories and videos featuring victims of this war are spreading all over the world and will contribute to changing our perception of war. People often say that “history is written by the victors”. Now, however, history is being live-streamed.

A major difference between the Arab Spring and the war in Ukraine is that there has been no attempt by Ukraine to control or shut down social media. Rather, the Ukrainian government is embracing social media platforms and is doing everything it can to keep them accessible.

Lining up to clear their names

The global tech giants are now standing in line to engage in ‘the good fight’. It is here that Ukraine and the social media platforms have found something that is largely beneficial to them both.

The tech giants […] are helping to
create solidarity, engage emotions and strengthen morale …

The tech giants have experienced a decade of being blamed for everything from creating a “post-truth world” to increasing loneliness. Now in general they are helping to create solidarity, engage emotions and strengthen morale not only in Ukraine, but also all over the world.

Ukraine’s minister for digital transformation, Mykhailo Fedorov, was born in 1991 and is thus barely 30. He belongs to the first generation of politicians who do not remember the world without the Internet.

Fedorov was Zelenskiy’s campaign director when Zelenskiy won the presidential election in 2019. He knows how to use social media.

Currently he is communicating openly and directly via Twitter with leading tech CEOs such as Elon Musk, Tim Cook and Jeff Bezos, as well as the CEOs of PayPal, Netflix, YouTube and Microsoft. The tech giants have picked their side. They are blocking Russian propaganda, protecting Ukraine against cyber attacks, providing intelligence, and suspending sales in Russia.

On 26 February, Fedorov sent a tweet to Elon Musk: “@elonmusk, while you try to colonize Mars – Russia tries to occupy Ukraine! While your rockets successfully land from space – Russian rockets attack Ukrainian civilian people! We ask you to provide Ukraine with Starlink stations and to address sane Russians to stand.”

Musk replied the same day and two days later a new tweet appeared from Fedorov: “Starlink – here. Thanks, @elonmusk.” “You are most welcome,” Musk replied.

Fedorov’s appeal for help on Twitter also had a symbolic effect. It was a powerful contribution to a global narrative of Ukraine as a modern country that has mastered digital technology; is concerned with transparency and the free flow of information; is on the same team as the tech giants; and generally represents the future.

Russia has one of the world’s most powerful militaries and for many years has been developing weapons to deploy in cyber attacks. But Russia has not started well in the information war about what is happening in Ukraine. Perhaps they started too late, or perhaps they never had a chance to get started.

Russia is the opposite of Ukraine. Media channels are subject to strict controls and censorship.

Western intelligence agencies’ open publication of information and the publication of real-time updates on Russia’s plans to invade on self-organized channels on Telegram and Reddit, won out and proved to be correct.

Russia is the opposite of Ukraine. Media channels are subject to strict controls and censorship. Social media platforms are blocked. Alternative media channels exist, but their number is ever-shrinking. And the Russian narrative seems to be having little impact in large parts of the world, including, perhaps, among younger people in Russia.

The narrative being live-streamed on social media appears to be about two countries each standing on its own side of history – old versus new, archaic versus modern, dictatorship versus democracy, transparency and freely flowing information versus control and censorship.

On the one hand, the global tech giants are providing Zelenkskiy and his digitisation minister with effective tools.

On the other hand, the tech giants can show how they are supporting “the good fight” in this war, clearing their names after a decade of scrabbling around pretty deep in the dirt.