Leaders in both Ukraine and Russia are making ammunition out of the Soviet Union’s wartime history. Who are the fascists this time? 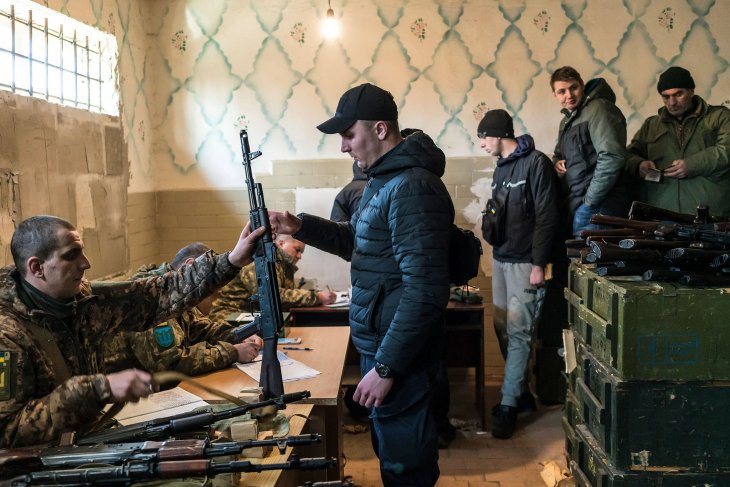 Ukrainian civilians signing up for military service in the war against the Russians. Photo: Manhhai / Flickr /CC BY-NC 2.0

It is both painful and strange to see photographs of Ukrainian civilians signing up for military service in the war against the Russians. Some of the volunteers are disturbingly young, their protective gear consisting of shin pads and ice-hockey helmets. Others look far too old to be soldiers.

Just before war broke out in February, Reuters ran a report about 79-year-old Valentyna Konstyantynovska from Mariupol – she had just learned to use a Kalashnikov assault rifle and was getting ready for battle. Via the internet, she became an instant Ukrainian folk hero. Civilians have been queueing up to obtain weapons that they barely know how to handle. Many Ukrainians have been preparing homemade Molotov cocktails, small incendiary bombs that they will throw at Russian tanks – if they can just get close enough.

Whether this broad mobilization of the population is heroic, appalling, or both, depends on the observer’s perspective. But Ukrainians are showing us an attitude to war that is fundamentally different to what we consider normal in Western Europe, where defending home territory is something most people leave to the regular military, NATO, advanced technology, and American nuclear warheads.

The Ukrainian spirit of resistance becomes more understandable if we see it in the light of the impact of World War II on Ukraine and the rest of the Soviet Union. And the Ukrainian government is well aware of the power of this history.

In Kyiv, there are now large billboards carrying a quote from an old Soviet song about the German invasion: “On June 22, precisely at 4 a.m., Kyiv was bombed and we have been told that the war has begun.” The Russian bombing of the city on 24 February 2022 began at approximately the same time as the German bombing started in June 1941.

A land of monuments 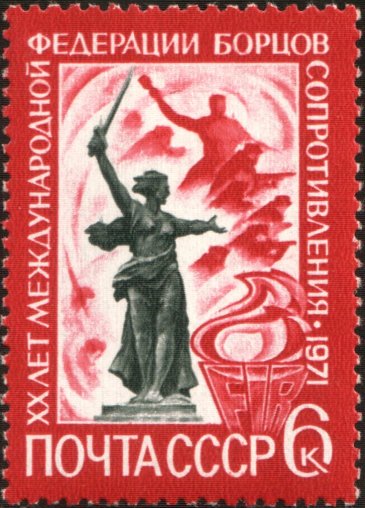 Soviet stamp from 1971, commemorating the battle of Stalingrad. Via Wikimedia Commons

Most people who have travelled around the former Soviet Union have probably noticed the extraordinary number of war monuments. Some of these are colossal, such as The Motherland Calls, an 85-metre-tall sculpture in Volgograd (previously Stalingrad) and the giant concrete head brooding over Brest Fortress in western Belarus, where the last defenders held out against more numerous German forces for a whole month in the summer of 1941. Other monuments are more discreet. But you will find war memorials absolutely everywhere.

It is not surprising that World War II has a special status in the former Soviet republics. Even in Norway, a country that the Germans treated relatively mildly during the occupation, there’s a constant stream of bestsellers about previously unknown aspects of the war. The Soviet Union may have lost as many as 27 million inhabitants in 1941–1945. Such losses are not quickly forgotten. But there are many different ways of processing collective pain.

A cult of war

In the early post-war years, the official Soviet line was to play down the incomprehensible human suffering, and Stalin and the Communist Party leadership took most of the glory for the victory themselves. It was the triumph of communism. In addition, a distinction was drawn between the different ethnic groups in the Soviet Union: the war was presented primarily as a story of Russian heroism, with little importance attributed to the contributions of other ethnic groups in the Soviet republics.

But after Stalin died in 1953, the Communist Party, under Nikita S. Khrushchev, began to foster a cult based around narratives of the heroism and resilience of the whole Soviet population during World War II. This continued under Brezhnev, who took over as the Party’s First Secretary in 1964.

It is telling that people in the former Soviet Union do not talk about “World War II”. Rather, it is known as the “Great Patriotic War”, a name that was previously used to refer to the French invasion of Russia in 1812. The story of the Great Patriotic War evolved into something close to a national religion, with countless cult sites in the form of grandiose monuments and lavish war museums throughout the country, and the story formed an important source of legitimacy for the Soviet Union.

Such legitimacy was badly needed in the 1950s and 60s. After the mass murders perpetrated by Stalin in the interwar years, and following Khrushchev’s denunciation of Stalinism, little remained of the optimism and fervour of the Russian Revolution. No World Revolution was happening anytime soon, and once the economy stagnated under Brezhnev, there was not even any improvement in living standards worth boasting about.

Accordingly, the laborious battle to repel the German invasion became the primary narrative of the Soviet Union:  brave Soviet citizens had saved their own country, they had saved communism, and they had saved the world with their willingness to sacrifice themselves in the battle against the Nazis.

… the worst
destruction and the largest mass murders perpetrated by the Germans had occurred on territory that is now in Belarus, Ukraine and the Baltic states.

This narrative resonated not only in Russia, but also more widely in the Soviet Union. It was true enough that Russians had comprised most of the Red Army, and the battles for Stalingrad (now Volgograd) and Leningrad (now St. Petersburg) had been truly horrifying.

But the vast majority of Russian territory had not been directly affected by the warfare, and the worst destruction and the largest mass murders perpetrated by the Germans had occurred on territory that is now in Belarus, Ukraine and the Baltic states. According to the historian Timothy Snyder, Belarus lost 25 percent of its population in 1941–1945, while Ukraine lost 16 percent and Russia 13 percent.

That the true story was not at all pure or unambiguous was brushed under the carpet in the Soviet Union. In 1932 and 1933, Stalin’s state-engineered famine had caused the deaths of several million Ukrainians, doing nothing to generate loyalty and trust in the Soviet state.

When the Germans arrived, many Ukrainians chose to fight against the Red Army, and Ukrainian nationalists participated enthusiastically in massacres of both Jews and Poles. In the west of Ukraine, a rump of nationalist forces continued to fight against the Soviet Union until 1949. But in the mythical saga of the Great Patriotic War, such details were omitted. Similarly, the German-Soviet Pact of 1939 was left out of the story.

In the story of the Great Patriotic War, the people of the Soviet Union were not the only heroes. In 1965, the Communist Party began to designate “Hero Cities”, an official title reserved for Soviet cities where the fighting had been hardest during the war. The Hero Cities naturally included Russian cities, for example Leningrad (now St Petersburg), Stalingrad (now Volgograd) and Moscow. But they also included Ukrainian cities such as Kyiv, Odesa, Sevastopol and Kerch. And tellingly enough: last Sunday President Zelenskiy issued a decree naming Chernihiv, Hostomel, Kharkiv, Kherson, Mariupol and Volnovakha as new Ukrainian Hero Cities – this time for the way in which the cities had been defended against the Russians.

For Zelenskiy, the parallels with the German invasion of 1941 are obvious: “For us, this is a patriotic war. We remember how patriotic wars begin. And we know how they end for the invaders,” said the president in a speech last week.

But currently, Zelenskiy is not alone in harnessing the collective memory of the battle against fascism. President Vladimir Putin is also doing his best to get the war in Ukraine to remind Russians of the Great Patriotic War. Russian propaganda endlessly repeats allegations that the Ukrainian government is fascist, and that Russia is under threat from the west. Extreme rightwing groups that do in fact exist in Ukraine, including the so-called Azov Battalion, are portrayed as representative of the whole Ukrainian state. In this way, the Russian invasion in 2022 can be presented as a continuation of the heroic Soviet battle against fascism.

To what extent this narrative is believed in Russia, and whether it has any significant impact on the opinions or motivations of Russian soldiers, is impossible to know. But there is something seriously amiss with Putin’s narrative, because the story of the Great Patriotic War is not a story about conquest. Basically, it is a story of obstinate, heroic defenders battling against technologically superior invading forces – opponents with better tanks and an overpowering air force. The Great Patriotic War was a fight by Russians to save lives and their own homeland.

In reality, it is now far easier for the Ukrainians than the Russians to draw strength from the story of the Great Patriotic War.

In this narrative, the Red Army was not the only defender. The whole Soviet population contributed to driving the Germans out. Partisans in the forests, daring saboteurs, women and teenagers, even children – everyone fought or contributed in some way. And victory was achieved by holding out, by being more willing than the other side to make sacrifices. In reality, it is now far easier for the Ukrainians than the Russians to draw strength from the story of the Great Patriotic War.

“The style of warfare is similar to that of World War II, and so it is logical that people have started using similar terms,” the author and Dag og Tid contributor Andrey Kurkov told the Wall Street Journal this week. He continued: “Tanks, bombings, destruction of cities. Today, the Russians are the fascists, and we are the ones defending our homeland.”