Russia’s war in Ukraine has been met with global condemnation drawing NATO and the EU closer together in coordinating collective responses.

In contrast to this coordinated front among US, French and German responses, it is worth drawing attention to the mixed regional responses among states in the Middle East for whom the war can have long-lasting destabilising effects. 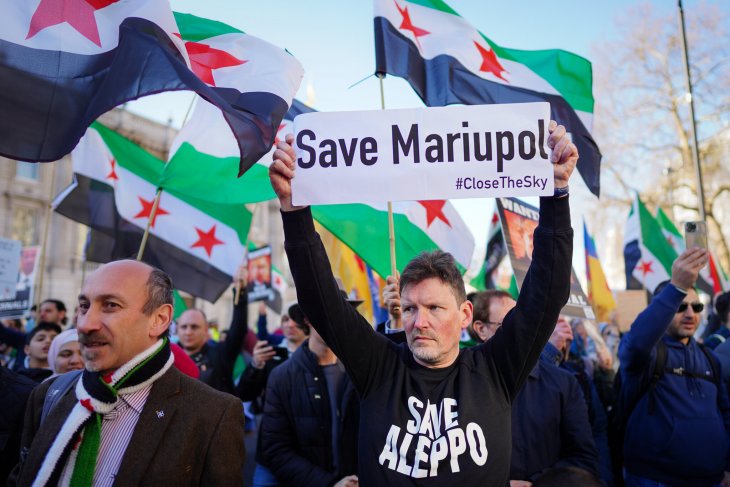 … leverage gained in one area can be useful for influencing on another area in order to secure national interests.

Relations among states in the Middle East are often shifting and can be seen through a “transactional alliances” perspective. By this we mean that leverage gained in one area can be useful for influencing on another area in order to secure national interests.

This makes alliances instrumental, fluid, and fleeting. The same two countries may be closely aligned in one setting, but on opposite sides in another.

The responses of Middle Eastern states are driven by their relations to the United States and other global powers, as well as by the “opportunities” provided by the war. The lack of domestic political pressure in many cases allows them a freer position to pursue narrow national interests.

To begin with, the voting in the United Nations General Assembly does not entirely reflect the complexity of the situation. There are countries that support Russia (Syria), countries that oppose its invasion of Ukraine (Lebanon), and a group of states trying to appear as neutral (UAE, Saudi Arabia). While Syria’s vote in support of Russia in the UN General Assembly was unsurprising, other Middle Eastern countries were in a balancing act with many voting against the Russian position, yet trying, outside the UN system, to figure out how to balance their national needs against their international allegiances.

The interdependence of Syrian-Russian relationship is well established. Russia is key to the continuity of the Syrian regime and has sustained Assad’s rule since it intervened in 2015. For its part, Russia is dependent on Syria to maintain their base in Tartus which gives Russia access to the Mediterranean, all the more important since Turkey exercised its legal rights under the Montreux Treaty (1936) and on 27 February closed the Bosphorus and Dardanelles straits to the passage of Russian ships.

The relations of other Middle East states with Russia are more complex and worth following closely. Following are a few illustrative examples.

Over the past year, Ukraine has made a concerted effort to improve relations to Israel with Zelenskyy recognising Jerusalem as Israel’s capital in December 2021. However, Israel’s concerns are multifaceted.

They need to maintain their historical alliance with the US yet are willing to serve as a mediator in the conflict between Ukraine and Russia. Nonetheless, they also need to preserve  their ability to engage in the Syrian conflict through an understanding with Russia regarding Iran’s regional role.

In addition, there is the complexity of the Jewish population in the Ukraine, as Israel tasks itself with safeguarding the well-being of Jews globally. Zelenskyy seems to have overplayed his hand in this regard when he in his speech to the Knesset compared the Russian invasion to the Holocaust. This created more ire than support in Israel and probably brought him no closer to securing Israeli arms.

Finally, Israel is also likely to be wary about speaking out too loudly against the Russian annexation of Crimea as Prime Minister Bennett has himself advocated for annexation of the occupied West Bank. His anti-annexation credentials are therefore not his strongest card.

Similar to Israel, Turkey seeks to
promote its role as a potential mediator …

Similar to Israel, Turkey seeks to promote its role as a potential mediator in the war as was evident in the 10 March meeting held between Russian Foreign Minister Sergei Lavrov and his Ukrainian counterpart Dmytro Kuleba in Antalya.

Turkey’s credentials as a NATO member and as an interlocutor to both warring parties places it in a unique position. This was evident most recently, on 17 March, when President Erdogan was personally contacted by President Putin outlining his conditions for any eventual peace deal.

Days later, Turkey found itself facing pressure from the United States to send Russian-made S-400 missiles to Ukraine – a move which would have undermined Turkey’s mediator position.

Furthermore, Turkey’s position is complicated by its need for Russian support in Syria to keep the Syrian Kurds in check , as well as to prevent the Syrian regime from making any advances on Idlib, the last rebel stronghold on Turkey’s border. Refugee flows from Syria would be deeply unpopular leading up to the elections of 2023.

While the general narrative is that Putin isolated, this is not necessarily the case when seen from the Gulf states.

While the general narrative is that Putin isolated, this is not necessarily the case when seen from the Gulf states. Saudi Arabia and the UAE are working to appear neutral in the conflict, which, from their perspective is seen as primarily a US, NATO, and European matter.

Yet this position is untenable: The US’s disengagement from the region – or even the perceptions thereof – has contributed to closer ties between the two Gulf powerhouse and Russia and China.

When President Biden and other Western leaders asked Saudi Arabia and the UAE as top OPEC oil producers to raise their oil production in response to the US and European boycott on Russian oil, their requests fell on deaf ears. The two Gulf states have chosen instead to stick with the OPEC+ agreement established during the COVID19 pandemic to lift oil prices, and stunned Washington by not responding to its requests  for phone meetings with President Biden.

Any discussion on Saudi Arabia and the UAE’s stance on the Russian invasion of Ukraine necessitates a reflection on what the key political and economic issues are.

The first political issue concerns the ongoing Iranian nuclear talks in Vienna, aimed at renegotiating the Joint Comprehensive Plan of Action (JCPOA) abandoned by former US President Donald Trump in 2018.

Russia’s invasion of Ukraine changed the calculus in the talks to revive the JCPOA.

In exchange for restricting its nuclear program, the agreement would relieve Iran from global economic sanctions and allow it to sell oil freely on the world market. After 11 months of talks, both Iranian and US representatives had sounded moderately optimistic by early March, as did representatives of the other parties to the talks: China, France, Germany, Russia and the UK. At the time, leaks indicated that there were technical issues yet to be fully resolved (not all trivial, such as how to deal with Iranian stocks of high-grade enriched uranium which Russia received following the original deal in 2015). Yet, both Iran and the US had agreed not to complicate the talks by introducing new issues related to regional security or arms control and there were expectations of a breakthrough. However, Russia’s invasion of Ukraine changed the calculus in the talks to revive the JCPOA.

On 5 March Russian Foreign Minister Sergey Lavrov demanded that its trade with Iran not be subject to the new sanctions imposed on Russia as a response to its invasion of Ukraine, a demand Western states were not ready to accept, thus threatening a full collapse of the talks. Iran kept praising Russia for its constructive role, and insisted that the talks were on track, although its chief negotiator, Ali Bagher-Kani was recalled to Tehran for consultations.

Russia’s intervention certainly had many – and often contradictory – effects on the Vienna talks, chief amongst them being mounting international demand for oil and gas, which Iran is well positioned to respond to. By extension, Iran’s hand at the negotiations was strengthened by new interest in its resources, yet also blocked by Russian demands that the US and other Western states would never comply with. In a last turnaround, following a Moscow visit by Iranian Foreign Minister Amir-Abdollahian, Russia dropped its demands, and optimism resumed. Russia now says that it received written guarantees and could allow the deal to move forward.

Make no mistakes, regardless of Russian demands, Iran and the US still had outstanding issues to agree on.

The second related issue – and most illustrative of transactional dynamics – concerns Saudi Arabia and the UAE’s military intervention in Yemen against the Houthis.

The UAE utilizes its non-permanent Security Council membership (from 2022 to 2023) to keep Yemen on the Council’s agenda and to push for harsher measures against the Houthis. These are important for the UAE especially following the drone and missile attacks targeted at critical infrastructure both in the UAE and in the Kingdom earlier this year.

On 28 February the Security Council not only renewed the sanctions against the Houthis, but for the first time since the 2015 intervention of Saudi Arabia and UAE, designated the Houthis as a terrorist group, a development in which the UAE is likely to have been instrumental.

The resolution was supported by Russia, (although reports indicate that it voiced it’s concerns that the terrorist designation would negatively impact the peace talks) who in 2015 had abstained from UN Resolution 2216 which imposed an arms embargo on the Houthis. Likewise in 2018 Russia vetoed a resolution extending the arms embargo. Moscow’s backing of the UN resolution appears to be a response to the UAE’s 25 February abstention from voting on a UN Security Council resolution denouncing the Russian invasion of Ukraine, although the UAE rejected that it engages in vote exchange.

Reflecting the UAE’s wish to remain neutral in a balancing act between its traditional ally, the United States, and rising powers, the UAE (and Saudi Arabia) voted in favour of the UN General Assembly resolution denouncing the invasion on 2 March.

While deals are made at the international level, Middle Eastern autocrats are simultaneously acutely aware of potential domestic fall-out in the region due to issues of food security. This is particularly egregious for Lebanon which has a month of wheat storage following the 2020 explosions in Beirut and an economic crisis which makes it impossible to pay for alternative sources at higher prices and shipping costs. According to UNCTAD, Egypt has a dependence of over 80% on wheat exports from Russia and the Ukraine (of which 60% is from Russia). With the demands of the Arab Spring – “bread and dignity” – fresh in the memories of Arab rulers, wheat scarcity is a looming security threat.

Unsurprisingly, the Ukraine war is shifting power relationships and alliances in the Middle East and beyond. It is difficult to envisage regional outcomes, beyond noting that they will be shaped by transactional negotiations over the next few months and the need by ruling elites to ensure regime continuity.