“We should not allow this problem to be passed down from one generation to the next,” said Xi Jinping in 2019 about the political differences between the two sides of the Taiwan Strait. The annual report from the Chinese government that was issued on 5 March 2022, said China is committed to “resolving the Taiwan question in the new era. The “new era” is normally understood as the time of President Xi. 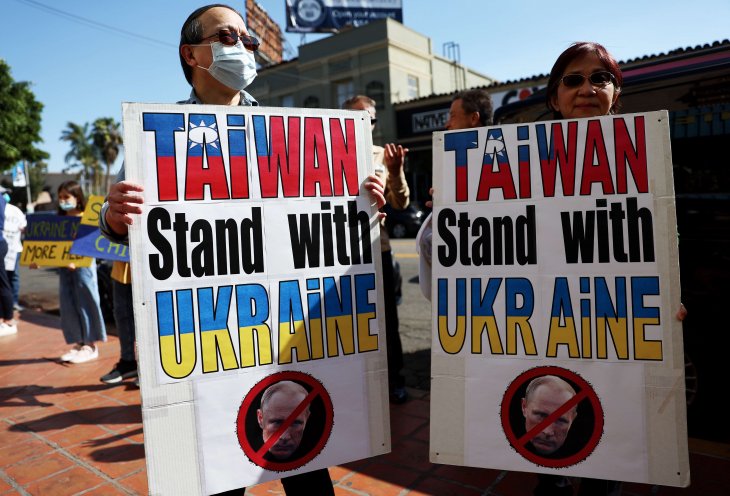 Still, fortunately, we have not seen open signs that China is preparing itself to invade.

… the US is likely to intervene militarily if Taiwan comes under attack.

A Chinese invasion of Taiwan would be more likely to ignite World War III than the Russian invasion of Ukraine, since a US and Japanese military reaction would be likely.

China is the main rival of the US for global power. If the US were to allow Beijing to take control of Taiwan, the US would consider its bases in Okinawa and Guam to be threatened, and Japan would be likely to develop its own nuclear weapons. To prevent that scenario, the US is likely to intervene militarily if Taiwan comes under attack. Although the US is not legally bound by the 1979 Taiwan Relations Act to defend Taiwan militarily, but only to uphold the capacity to do so, Biden has said he will.

… people have moved away from their Russian and Chinese identities, respectively.

The Taiwanese fear the fate of the Ukrainians. This is because they are in a similar situation. In both places, people have moved away from their Russian and Chinese identities, respectively.

To combine a Ukrainian and Russian national identity is now difficult. In Taiwan, the number of people who see themselves as Chinese has dwindled and those claiming to combine a Taiwanese and Chinese identity have gone down from 50 to 30 per cent.

In Ukraine, the identity change came as a reaction to the Russian annexation of Crimea in 2014 and the war that followed in the Donbas region.

In Taiwan, this identity shift received a boost when China slammed a draconian National Security Law on Hong Kong in 2020. This showed the Taiwanese what they could expect from national unification in “one China.”

The transformation of national identities partly explains how tenaciously the Ukrainians have resisted the Russian onslaught in February–March 2022. Another reason is that Ukraine has built more military capacity since 2014. This is also the case for Taiwan.

The national identity transformation is reflected in political change. Popular mobilization led to regime change in Kyiv in 2014. Ukraine’s loss of Crimea and the armed conflict in Donbas made it impossible for pro-Russian politicians to win a Ukrainian election.

In 2016, the presidential candidate of Taiwan’s “one-China party” (the Kuomintang, or KMT) lost to Tsai Ing-wen, the leader of the Democratic Progress Party (DPP). She has not made moves to establish de jure independence by changing the official name of the state from “Republic of China,” but she has rejected the so-called 1992 consensus, which says there is just one China, but that there is disagreement about what “China” means. This has led to tension across the Taiwan Strait. Tsai Ing-wen was re-elected in 2020. A survey of the Taiwanese population published on 4 March 2022 revealed that 76 per cent of the respondents are satisfied with the status quo, while less than 15 per cent want to change the Republic of China’s constitution.

The similarities between Ukraine and Taiwan should not prevent us from seeing some basic differences.

The similarities between Ukraine and Taiwan should not prevent us from seeing some basic differences. First there is the legal factor. Ukraine is an internationally recognized sovereign state with full membership in the UN. The Russian invasion was therefore a war of aggression, violating the UN Charter.

The Republic of China on Taiwan lost its UN membership to the People’s Republic of China (PRC) in 1971 and is considered internationally as a part of “one China”—although not of the PRC. This strengthens the case for reunification. China’s National People’s Congress adopted an anti-secession law in 2005, which obliges China to intervene in force if Taiwan should declare itself independent.

Protection from sea and mountains

The next difference makes an invasion of Taiwan exceedingly difficult: geography.

An invasion of Ukraine should normally be relatively straightforward in terms of terrain, as the land is flat. Tanks and other vehicles can just roll across the border.

By contrast, Taiwan is a mountainous island with few beaches and is separated from mainland China by the broad Taiwan Strait. An amphibious assault would almost certainly fail if met with determined resistance. An invasion of Taiwan would therefore need to be preceded by a naval blockade or a massive attack by missiles to destroy Taiwan’s infrastructure. This would give the US and Japan time to react. The Chinese People’s Liberation Army is also fully aware that, in contrast to the Russian Army, it lacks combat experience. China has not gone to war since 1979, when it invaded Vietnam.

An all-out Chinese invasion of Taiwan is thus improbable.

An all-out Chinese invasion of Taiwan is thus improbable. If China wanted to utilize the crisis in Europe to make military moves in its own region, then it would probably try to do something less likely to be actively resisted, such as building more military structures on reefs in the South China Sea or perhaps seizing islands occupied by Taiwan or one of the Southeast Asian states. In this way, Beijing would also test the US reaction, which would be less likely to take the form of a direct military intervention.