Pope Francis has condemned the war in Ukraine in strong words. 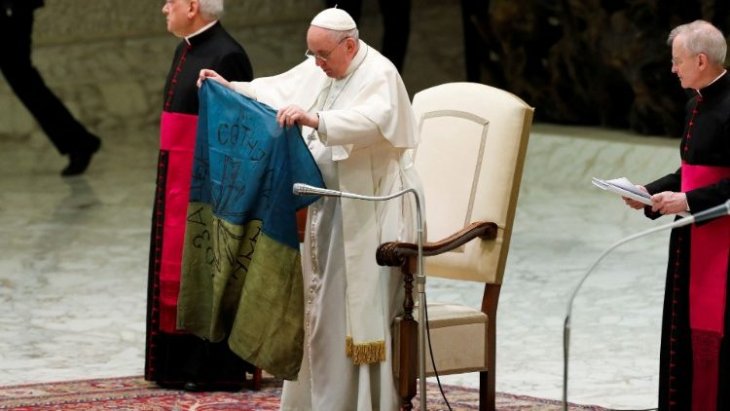 Pope Francis with a flag from Bucha. Photo: the Vatican

He dismisses the assertion of Putin’s propaganda that it merely involves “military operations,” and instead condemns it as a war that causes “death, destruction, and distress.”

But as head of the Catholic church and its diplomatic arm the “Holy See,” he has not confronted Putin directly. Francis has avoided mentioning “Putin” or “Russia” in his speeches.

Why does the Pope not go further, condemning the invasion and affirming Ukraine’s right to armed self-defense?

The Holy See, as a subject of international law, has bilateral relations to nearly every country, including Russia. The Holy See does not regard itself as a state with a territory to protect; its primary role when conflicts break out is to serve as a peacemaker. By refraining from explicitly condemning Russia and Putin’s regime, Pope Francis creates for the Holy See a space where the church’s peace diplomacy can have effect at a decisive point in time.

… the Pope wants to avoid letting the conflict between East and West become a religious conflict.

Moreover, the Pope wants to avoid letting the conflict between East and West become a religious conflict. Hence, he avoids statements that could create the impression that the Catholic church is defending a western Catholic territory against an eastern Orthodox territory, or Ukrainian Catholics against Russian Orthodox.

He holds that this in no way is a religious war, either on the Russian side (despite Putin’s claim that his aims are to protect a persecuted Russian minority and to defend the interests of the Moscow-aligned Orthodox Church) or on the side of the Ukrainians (who are fighting first and foremost for their nation’s sovereignty).

Francis’s speeches accordingly emphasize the suffering of this war’s many victims – Ukrainian mostly but also Russian – rather than asserting the Ukrainian people’s right of self-defense.

The Pope uses strong language when he calls Mariupol “a martyr city” (“una città martire”). It is also valuable when Francis, with his unique religious authority, asks for humanitarian corridors and proclaims the Christian duty of showing hospitality to refugees.

Francis carried out his first official journey as the newly elected head of the Catholic church to the Italian island of Lampedusa, where he condemned the world’s indifference to the death of migrants in the Mediterranean – and this lends increased credibility to his exhortation about love of one’s neighbor vis-à-vis the refugees from Ukraine.

… how far ought a Pope to go, while still holding the door open for church diplomacy…

Some will doubtless demand that the leader of the world’s largest religious body should condemn more strongly the Russian invasion of Ukraine. But how far ought a Pope to go, while still holding the door open for church diplomacy that can help put an end to the suffering caused by this war of choice?

This is the abiding dilemma for a pope in today’s church – a pastor who aims to be both a prophetic voice against the injustice of war and a diplomat who voices the urgency of a peaceful solution.