Triumphalist rhetoric coming out of Moscow notwithstanding, Russia’s war in Ukraine is not progressing according to plan (see EDM, April 11).

Nevertheless, President Vladimir Putin repeated yet again last week (April 12) that the central objective of the massive re-invasion of Ukrainian territory starting on February 24 purportedly was always limited to seizing the whole of the Donbas region (Kommersant, April 12). 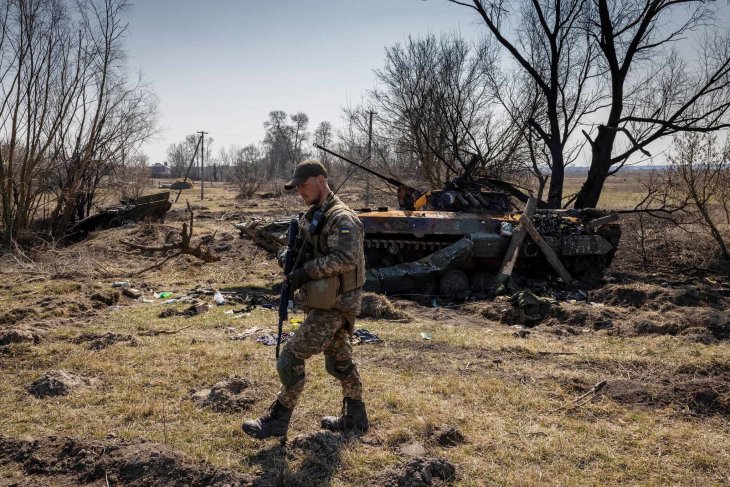 A Ukrainian soldier walks past a Russian vehicle destroyed in a fire fight. Photo: Ivor Prickett for The New York Times / Flickr / CC BY-2.0

It took plenty of careful persuasion from the top brass to impress upon him three weeks ago that Russia’s thrice-revised original plan to capture Kyiv — by a swift attack, or a forceful breakthrough, or a long siege — could not be implemented. And notably, Russian Defense Minister Sergei Shoigu has not made a single public statement or international contact since this retreat.

The allegedly newly appointed commander of Russian forces in Ukraine, Army General Aleksandr Dvornikov (Russian sources remain mum about his promotion), is presumably responsible for executing a decisive offensive in Donbas. But this latest push could well also turn out to be mission impossible (Meduza, April 13; see EDM, April 13).

A determined onslaught through the well-prepared Ukrainian defensive positions in the east of the war-torn country arguably requires an operational pause to enable Russia to rebuild its battered battalion tactical groups (BTG) as well as assemble a second-strike echelon from the forces redeployed from the failed offensive on Kyiv.

Russian propaganda tries to present every hard-won bit of muddy terrain as a major success.

Instead, the arriving Russian reinforcements are being sent piecemeal into the persistent attacks from the Izium bridgehead toward the Slovyansk cross-roads of key communications. Russian propaganda tries to present every hard-won bit of muddy terrain as a major success (Izvestia, April 16).

Soldiers in the trenches, however, know better, and the morale in the ranks has fallen far below the level of determination needed for a resolute attack. Meanwhile, reports about desertions and refusals to partake in the “special military operation” (as Putin has demanded the war be referred to) keep piling up (Svoboda.org, April 15).

Ukrainian forces, to the contrary, are highly motivated; and every bit of news about the continuing heroic defense of Mariupol adds to the resolve to repel Russia’s offensives and to launch counter-attacks. In particular, the Ukrainians have apparently been targeting the beaten Russian force grouping retreating from the failed offensive on Mykolaiv and Odesa toward Kherson, to the west of the Dnieper River (Krym.Realii, April 13).

Sinking of the Moskva

An indirect but powerful impact on the course of operations in Donbas was the spectacular sinking of the flagship of the Russian Black Sea, the fleet cruiser Moskva, which was hit by two Ukrainian Neptune anti-ship missiles on the night of April 13, some 150 kilometers south of Odesa (Kommersant, April 14).

Russia’s admirals are primarily concerned about their commander-in-chief’s reaction.

Official Russian reporting admitted only the detonation of ammunition as a result of a fire aboard, which forced the crew to abandon the ship; it said nothing about casualties (Nezavisimaya Gazeta, April 14). Russia’s admirals are primarily concerned about their commander-in-chief’s reaction.

In July 2000, at the start of Putin’s reign, they attempted to explain away the disaster of the Kursk nuclear submarine sinking by blaming a supposed hostile action by a submarine operated by the United States; and now they are trying to disavow the hit by the Ukrainian missiles, admitting only to an “accident” that cannot possibly be investigated (Moskovsky Komsomolets, Glavred.Info, April 15).

The symbolism of this shocking naval defeat cannot be dispelled by any simple propaganda, so Dvornikov and Shoigu are certain to come under heavy pressure from the Kremlin to urgently deliver a more impressive victory in Donbas than just capturing the utterly devastated Mariupol.

The only reason the top brass can give to justify their present and forthcoming setbacks is the massive Western military support for Ukraine. And this explanation contains an element of truth, as the deliveries of heavy armaments from the US and many European states have expanded (Nezavisimoe Voennoe Obozrenie, April 14).

But the Russian foreign ministry found no better way to address this problem than to issue a diplomatic note to Washington and other suppliers, warning about the “unpredictable consequences” of this interference (Moscow Times, April 16). Even though this threat was left hopelessly ambiguous, it was clearly not meant for domestic consumption since the Russian mainstream media has barely mentioned it (Rossiiskaya Gazeta, April 14).

The wording in the note is actually softer than Putin’s warning, issued on day one of the “special military operation” to all those who might try to obstruct it, that they would face “consequences you have never seen in your history” (Interfax, February 24).

The timing of the odd diplomatic demarche seems rather divorced from the slow-moving battles in Donbas, where Ukrainian reinforcements armed with US 155-milimeter howitzers and (potentially) German Leopard-1 tanks will keep coming no matter what objections Moscow raises (Gazeta.ru, April 15).

Addressing NATO developments in the North

Putin insists that it is not Donbas but the breakdown of the US-led unipolar world order that is “the main thing” (Bfm.ru, April 12).

Putin insists that it is not Donbas but the breakdown of the US-led unipolar world order that is “the main thing”.

So Moscow’s reminder about the “consequences” was, therefore, aimed rather at the fast-moving preparations in Finland and Sweden to make a decision about joining the North Atlantic Treaty Organization (NATO) — an outcome that would deliver a hard blow to Putin’s vision of a disunited and debilitated West (Nezavisimaya Gazeta, April 14).

With the bulk of Russian conventional forces concentrated and wrecked in the Ukraine theater, the only means available to counter this perceived aggravation of security in the North is nuclear; and so Russian experts are eager to entertain new variations of the old brinksmanship tactics (Moskovsky Komsomolets, April 14).

A plan to move a few dozen non-strategic nuclear munitions to modernized storage in the Kaliningrad region will quite probably be announced in the coming weeks, but Russia’s security cannot possibly be improved by nuclear counter-balancing in the Baltic Sea region (Vzglyad, April 15).

Nuclear saber rattling can increase risks but cannot offer Russia any edge in its confrontation with the West, which in Putin’s imagination is on the brink of breakdown determined by economic decline, political discord and moral decay.

Russia’s chances of surviving the escalating calamity diminish with every day the devastating war in Ukraine persists.

In reality, he has delivered his own country to exactly the same critical degradation, and Russia’s chances of surviving the escalating calamity diminish with every day the devastating war in Ukraine persists. Failure to achieve even the meaningless minimum war aims in Donbas will necessitate a reckoning with this actuality.

The generals, who have experienced the fierceness of Ukrainian defense and the demoralization of their own troops, will be the first within the top political-military leadership to drop the denials of defeat. The looming conflict between Putin and his top brass will not be able to be resolved by Stalinist-style purges, because the chain of command in the war must be preserved.

A bottom-up resolution is, thus, looking more and more probable.