Russia has revised its war plan multiple times during the, so far, seven-week-long, ill-conceived large-scale invasion of Ukraine, yet it still remains incompatible with both tactical imperatives and political ambitions. 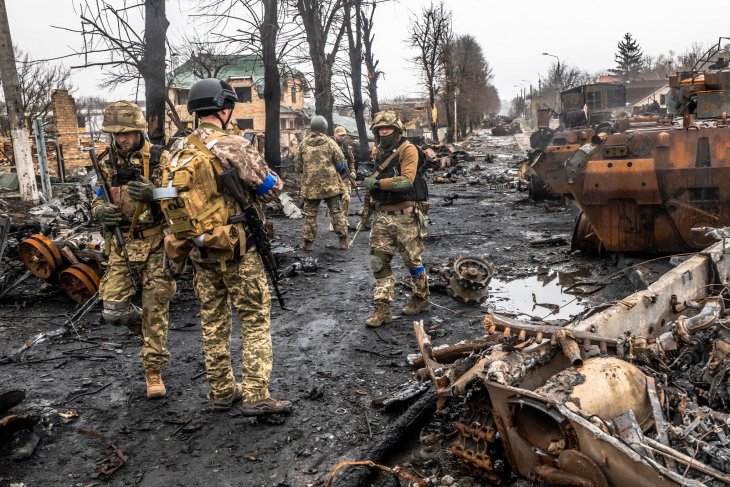 The consecutive revisions themselves have been flawed in different ways: if the initial “Blitzkrieg” design was based on the assumption that the Ukrainian military would disintegrate, the follow-up proposition for laying siege to Kyiv presumed that the government would capitulate, while the order to execute a breakthrough toward Odesa mistakenly took for granted that Ukraine’s most important seaport had been left undefended.

It is unclear whether the Kremlin is learning from these failures or if it is consuming its own propaganda; but the Russian top brass has now further curtailed the campaign, from a goal of conquering most of Ukraine to a much more modest aim — establishing control over all of the Donetsk and Luhansk regions (Donbas) (Izvestia, April 7).

This plan might appear more feasible, but it answers neither the Kremlin’s political imperative to establish a land corridor to Crimea (see EDM, March 17), nor the need to gain some relief in the sanctions regime, nor the urge to score a convincing victory over the “neutralized” Ukraine.

President Vladimir Putin may, indeed, fancy a pompous victory celebration at the traditional May 9 parade. And so some statements from the Kremlin indicate the intention to wrap up the “special military operation” against Ukraine in the foreseeable future or even in the “coming days” (RIA Novosti, April 8).

What adds a modicum of credibility to these words is the decision to proceed with the spring draft as usual, without any prolongation of the terms of service or calling in reservists (Moskovsky Komsomolets, April 7).

Given the staggering level of casualties (which may not be reported to the apprehensive commander-in-chief), this shallow inflow of fresh conscripts guarantees that the Russian army will face manpower shortages — a problem entirely alien to its strategic culture (see EDM, March 31).

The Russian battalion tactical groups (BTG) that have retreated from Kyiv’s suburbs to Belarus and Russia’s Kursk and Belgorod regions are reportedly too defeated and demoralized to be immediately redeployed to the Donbas warzone; multiple news accounts tell of the soldiers’ refusal to return to combat duties (Current Time, April 9). The Ukrainian Armed Forces, to the contrary, can move reinforcements to the crucial battlegrounds, and Moscow is worried about expanded deliveries of heavy weapons to those defending forces from the North Atlantic Treaty Organization (NATO) (Nezavisimaya Gazeta, April 5).

Dangers of a protracted war

Bringing the conflict quickly to a minimally satisfactory conclusion is difficult for Moscow, but a protracted war is certain to produce problems on a far greater scale.

…  a protracted war is certain to produce problems on a far greater scale.

First and foremost, there is the question of economic mobilization to sustain the war effort, while the Russian economy continues to suffer severe distortions from the unprecedentedly punitive Western sanctions (Sibir.Realii, April 8).

Russia’s Prime Minister Mikhail Mishustin claimed recently that the damage could be gradually minimized; but in fact, with every coming month, critical supply chain interruptions will compound further (Kommersant, April 7).

The country may not face food shortages, but its space program is grinding to a complete halt — and without new satellites to replace its naturally aging constellation, the already apparent problems with intelligence gathering and securing crucial chains of command will render the Russian Armed Forces incapable of conducting operations in modern war (Svoboda.org, April 8).

Russia will also struggle to replenish the hundreds of tanks and transport trucks it has lost since Putin launched the massive re-invasion on February 24. That task is becoming next to impossible because the Russian military-industrial complex cannot function properly without key technology and equipment imports sanctioned by the West (Rosbalt, April 8).

Ukraine’s economy has itself been severely damaged by the war, but the United States and its Western allies continue to supply the Ukrainian military with modern weapons systems, which may soon include anti-ship missiles (Nezavisimaya Gazeta, April 7).

Mainstream Russian experts keep arguing that the Europeans cannot tolerate much more pain from the severed economic relations with Russia, but the visit to Kyiv of European Commission President Ursula von der Leyen last Friday (April 8) and the European Union’s announcement of the fifth package of sanctions tell a different story (Russiancouncil.ru, April 8). Western solidarity remains solid, and even Japan has departed from its long tradition of cultivating political relations with Moscow and expelled eight Russian diplomats (The Insider, April 8; Vzglyad, April 7).

Russia has deployed most of its combat-capable army units to the Ukrainian theater; and in the long war scenario, this concentration will inevitably nullify all the advantages it used to have in the military balance with NATO in Central Eastern Europe.

Moscow’s pre-war demand to the Alliance to curtail its military infrastructure east of the Oder River was far-fetched and now appears absurd. Secretary General Jens Stoltenberg routinely points out how Putin’s desire to have “less NATO” has produced a lot more of it (Meduza.io, April 7). Russian commentators keep looking for signs of disagreement in Brussels when it comes to coordinating military aid to Ukraine; but they cannot fail to see the strong commitment in key European states to increas their defense expenditures (Izvestia, April 9).

The war unquestionably necessitated changes to the draft NATO Strategic Concept, to be approved this summer. Yet many front-line states still struggle to internalize the strategic reality of their newly gained position of strength vis-à-vis the militarily exhausted and economically fast-declining Russia (Republic.ru, April 8). Finland and Sweden, for that matter, can now contemplate the proposition to join the North Atlantic Alliance without much concern about possible Russian counter-measures (Kommersant, April 7).

The choice between two bad options

Russia lacks energy for an offensive push or political resolve for the compromises necessary to end the hostilities quickly; but neither does it have the stomach for a protracted war.

Ukraine … now fights not for survival but for the liberation of its occupied lands.

Yet facing the choice between two bad options, Moscow appears set to go for both, collecting the full basket of negative consequences and dispensing with possible gains and mitigations.

As the record of war crimes lengthens, Russia’s international reputation sinks to new lows and the outrage in the reunified West translates into stronger support for Ukraine, which now fights not for survival but for the liberation of its occupied lands.

In many Western polities and societies, initial worries about not provoking Russia are ebbing, giving way to growing determination to punish Moscow’s aggression. For the Putin regime, military might was long considered the ultimate manifestation of Russia’s “greatness.” However, Ukraine has proven the falseness of this premise and could ensure that Europe remains safe from this menace for a long time to come.