Soldiers, refugees, victims, mothers: we must listen to stories about the women’s war in Ukraine. 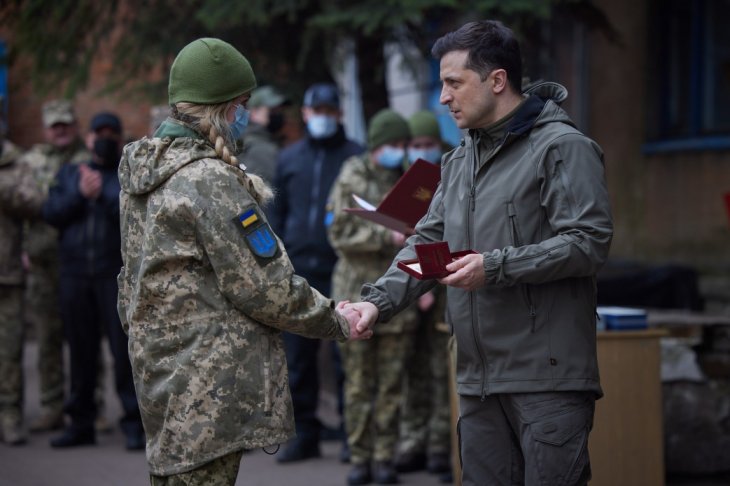 Five weeks have passed since the start of the war in Ukraine. Shocking images dominate television news broadcasts. Europe is experiencing its largest refugee crisis since World War II. Men aged between 18 and 60 have to stay in Ukraine, while women, children and the elderly flee.

The American philosopher Jean Bethke Elshtain described the relationship between men and women in war as a division of roles between “beautiful souls” (women) and “just warriors” (men).

She says for some soldiers, their objective in a war is to protect all non-combatant women and men. The women represent what the soldiers are fighting for and must preserve: their homes and families. Women represent the future that will be reinstated after the conflict is over. In other words, women must remain in the background of the conflict; be present when the soldiers return home from combat; and – by giving birth to the male soldiers’ children – ensure the survival and continuation of the group.

Does this mean that only women are victims? It’s not that simple. Men suffer too. Ukrainian men of fighting age are forbidden to leave the country with their families. Although they have western countries’ moral support and weaponry, basically they stand alone on the frontline against Russia’s war machine.

In addition, we know little about the Russian soldiers, although we do know that many are still in their teens and that many have been thrown into a war that they do not want and that has objectives they do not understand. Their Russian mothers are also in despair.

In St. Petersburg, Svetlana Golud, head of the local unit of the Soldiers’ Mothers Committee, is spending her days and nights on the phone. She tries to establish the whereabouts of boys who have not been in contact with their families for several weeks or months. Her team has done this before, when their sons were in Chechnya.

The questions then were the same as they are now: Where are their sons? Are they alive? What are they actually doing? What are they being forced into?

Working conditions are difficult for the soldiers’ mothers, who have been designated “foreign agents” by the Russian authorities.

The UN’s Special Representative of the Secretary-General on Sexual Violence in Conflict is also concerned. She fears that women and children who have been forced to flee may be vulnerable to sexual abuse, trafficking, people smuggling and other criminal activities. Her concerns are not unfounded. On behalf of the UN Secretary-General, her office compiles annual reports about sexual violence in war and conflict. The fact that people forced to flee their homes are particularly vulnerable is nothing new, but these reports show that women, girls, young boys and LGBT+ people are particularly at risk of sexual exploitation.

Many pregnancies are the result of violence.

Many pregnancies are the result of violence. There is no reason to believe that this will not also be true for the women fleeing the fighting in Ukraine.

As a minimum, writes the Special Representative, we must ensure that people engaged in humanitarian efforts have this in mind, that they look out for experiences that are so painful and stigmatizing that they are often concealed from the outside world. There is much knowledge about how we can help people who have suffered degrading treatment. Now we must put this knowledge into action.

Perhaps we can direct humanitarian efforts so that these types of experiences are addressed at an early stage. So those who may experience this type of violence can avoid feeling shame and guilt. Perhaps we can secure evidence against possible perpetrators so that they do not go unpunished. Perhaps we can prevent unwanted pregnancies, while also ensuring that children who are born are well cared for.

… not all Ukrainian women are vulnerable refugees. They are also warriors.

But not all Ukrainian women are vulnerable refugees. They are also warriors. There are women on the battlefield as well as men. Women have been part of Ukraine’s military since 1993. Since 2014, the Ukrainian military has been boosting its forces, including by recruiting women. Immediately before war broke out, women accounted for 23 percent of military personnel.

Just before Christmas 2021, women aged 18 to 60 were asked to register for military training so that they could enlist in the country’s reserve forces. Photographs of women with weapons slung on their shoulders looking after children, or undergoing military training in civilian clothing, have circulated around the world. There is reason to believe that the proportion of women soldiers will increase. In a war where everyone must be mobilized, women are also stepping up. They are carrying arms – and also homemade Molotov cocktails.

What will happen when peace is restored and a new future has to be carved out? Because we have to believe that this will happen – and we must hope that it happens soon. Who will negotiate and make the decisions? No doubt the primaeval story about war and gender will re-emerge. Most often, it is men who sit around the negotiating table and reach agreement.

Research shows, however, that if one includes women, peace accords are often stronger and longer-lasting. This is something that the Ukrainian and Russian negotiators must remember at what the Liberian Nobel Peace Prize winner, Leymar Gbowee, calls “the glorious moment”; the moment when peace comes into sight and war recedes.

Gbowee, together with a coalition of women from different ethnic and religious groups, insisted on influencing the 2003 peace process in Liberia. When the male peace negotiators refused to admit the women to the negotiations, Gbowee threatened to strip herself naked in public. This transformed the negotiating process, resulting in peace, and a Nobel Peace Prize.

For several years, women in Ukraine have also been stripping off their clothes in protest. The Ukrainian feminist organisation Femen uses this tactic as its main form of protest. Currently they are painting their bodies in the colours of the Ukrainian flag and protesting in European cities against Putin and what is happening.

But stripping oneself naked is obviously not the only way for women to secure a place at the negotiating table. Women have a right to contribute to deciding their country’s future. This is in everyone’s interests, not only women’s, in light of the situation of refugees and the children that will be born as a result of wartime violence, among other considerations. If the leading national negotiators fail to remember to include female representatives of different factions and interests, then international negotiators must insist on their inclusion. There is too much at stake.

Women are no more peaceful than men.

The inclusion of women nonetheless offers no guarantee of a long-lasting peace. Women are no more peaceful than men. But women’s presence may alter the dynamics of the negotiations. New elements may be included in ceasefires and peace accords.

Women were not included the last time there was war in Europe, in the Balkans. No women helped to negotiate the peace that ended a war where sexual violence was used strategically as a weapon. It took decades for the women survivors of this violence to receive a modest amount of compensation.

This should not be the case today. In Europe, we have experience to show that several things must be on the table in order to achieve a just peace.

So far, photos of attempted negotiations have shown a lot of men sitting around long tables. This war was initiated by a Tsar-like leader surrounded by a group of apparently ineffectual male ‘courtiers’. It is obvious that they will guarantee neither peace nor security for Ukraine, or for Europe. Others must be involved.

And so in a future when peace has returned to everyday life in Kyiv, Mariupol, Donetsk, Kharkiv, Luhansk, Irpin and other places in Ukraine, we must listen to all the stories about everything that happened. These must include stories about the experiences of women, as soldiers, refugees, victims and mothers, on both sides of the conflict. Because what might we discover if we make their stories into the main narrative about the nature of war?

The Belarusian writer Svetlana Alexievich gives us some answers when she says:

“Women’s stories are different and about different things.”

“When women speak, they have nothing or almost nothing of what we are used to reading and hearing about: How certain people heroically killed other people and won. Or lost. What equipment there was and which generals. Women’s stories are different and about different things. ‘Women’s war’ has its own colours, its own smells, its own lighting, and its own range of feelings. Its own words. There are no heroes and incredible feats, there are simply people who are busy doing inhumanly human things.”

These words are from Alexievich’s book The Unwomanly Face of War. It is based on a series of home interviews with women about their wartime experiences in various parts of the Soviet Union. These women also carried weapons and wore military uniforms. When the book was first published in Belarus in 1984, it was heavily censored. Subsequently she was persecuted in Belarus and lived in exile for several years. The women’s stories did not fit with the heroic narrative of how the mighty Soviet forces won the war and liberated Europe from Hitler’s grasp.

The book was rejected by several publishers, but was finally published.

In 2004, a new, uncensored version was published. In this version, Alexievich included reflections on the first edition in passages she titled “From a conversation with a censor”. Here we read that the censors said that her book was “a slander against our soldiers who liberated half of Europe […] We don’t need your little history, we need the big history” and that there were also concerns about the effect of recording these stories, because “who will go to fight after such books?”

And so let us listen to stories about the women’s war in Ukraine, now and in the future. Let us bring their voices into the open and make them part of the big story of what is happening, and will happen, in Ukraine in the days and months to come.

We need to know more about what war is, from those who fight and those who are fought for. And if it is the case that women’s stories about the war make soldiers less heroic in the eyes of the political leaders who are responsible for the war, that they make the decisionmakers understand more about the inhumanly human activities, then let the stories come into the open.

We must start this work now. We can’t afford not to.