The deadlocked war has delivered Russia to an impossible situation where it can neither reckon with reality nor keep denying it.

The official discourse on and the societal response to the unfolding disaster have so far contained a peculiar mix of patriotic mobilization and pretense that normal life continues undisturbed. 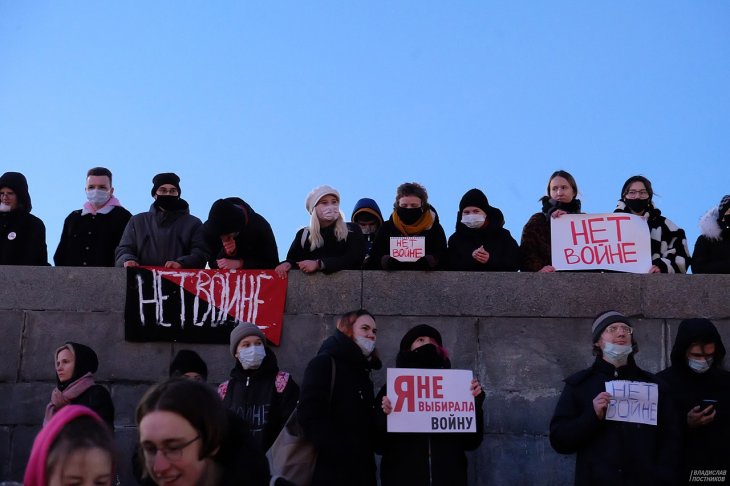 The intensity of official propaganda has reached the climactic level, but the war is still described as a “special operation” progressing according to plan. Harsh repressions have discouraged anti-war protests, but the prevalent attitude is confused indifference to rather than active support for the brutal aggression (Meduza.io, April 24).

Neither the hysterical drum-beating nor the cynical minding of own business is sustainable for much longer, and the approaching celebrations of May 9 Victory day may mark the point where Russian neither-war-nor-peace stance would acquire a more definite and perhaps more dangerous character.

For President Vladimir Putin, this traditional holiday has become a moment of sacred significance as he has over the years turned the day of remembrance of great sacrifice into a celebration of Russia’s superior military might.

Last week, he gave a preamble to the forthcoming militaristic festivity in a speech in St. Petersburg, reiterating the pledge to achieve all goals of the “special operation” and issuing a threat to deliver a “lightning-fast preventative counter-strike” against unnamed external forces that attempt to obstruct Russia’s intervention (Kommersant, April 27).

This threat is only slightly elevated from his previous warning about “consequences you have never seen”, but it was supported with the point about readiness to use “instruments nobody can brag about” (Izvestiya, April 27). The reference to nuclear capabilities is barely hidden in these loose words, but crossing the nuclear threshold is a high-risk choice, to which Putin might prefer a more conventional alternative – calling the war by its name and decreeing mobilization necessary for its conduct (Svoboda.org, April 29).

Mobilization comes at a cost

Mobilization is indeed necessary for sustaining the high-intensity military operations, but even a limited expansion of draft and dragooning of reluctant reservists come at a high economic cost (Forbes.ru, April 26).

The government is struggling to minimize the scale of damage caused by the sanctions and cuts of multiple supply chains, but cannot invent a better scenario than an extra-deep recession lasting at least two years (Nezavisimaya gazeta, April 27). The necessary condition for preventing an economic collapse is the sustained inflow of petro-revenues, but the Kremlin is firm set on using Gazprom as an “energy weapon” against the presumably gas-addicted Europe, and each case of blackmail prompts the EU to curtail consumption of Russian hydrocarbons (NovayaGazeta.eu, April 28).

Putin is … wary about deepening discontent in many elite groups

The gang of “siloviki” in Putin’s court demands firmer central control over assets and money flows privatized by quasi-loyal oligarchs deeply upset by sanctions, and Nikolai Patrushev, long-serving secretary of the Security Council, positions himself as a champion of the cause of economic war-mobilization (Moscow times, April 29). Putin is attentive to these demands, but he is also wary about deepening discontent in many elite groups, which are eager to replicate the jingoist rhetoric but abhor the very notion of sacrifice (Republic.ru, April 28).

Suspicions about possible sabotage of mobilization orders by corrupt bureaucracy and disgruntled populace bring Putin back to the nuclear option, which is no longer treated in public discussions as catastrophic and unthinkable, but often perceived as advantageous for Russia, particularly for pressuring the scaredy European neighbors (Valdai club, April 28).

Maximum spin is placed on the recent test of the Sarmat intercontinental ballistic missile, which is still years away from production and deployment, but is already useful for boosting deterrence posture vis-à-vis the US (Nezavisimoe voennoe obozrenie, April 28).

Russian discourse has traditionally remained mum about the non-strategic nuclear weapons, many hundreds of which are stored for 30 years in a dozen of specially designated depots, but Putin’s reference to ready-to-use “instruments” may indicate intention to bring them closer to the delivery systems (Meduza.io, April 20). Risks of technical failures and human errors in such tactical re-nuclearization will inevitably be high, and every possible accident is set to push up the risk of an accidental nuclear exchange, as many commentators in Russian social networks argue (Svoboda.org, April 29). Even deeper concerns are about Putin’s inscrutable contemplations on staging a nuclear demonstration (Grani.ru, April 28).

The imperative to examine such options brings many mainstream experts to the conclusion that Russia’s foreign policy has arrived to a sad dead-end (Kommersant, April 29). The voices that until recently were upbeat about Russia asserting its great power status by projecting power now start to lament about the damage done to this status by the unnecessary war (Profile, April 27).

Despite the suppression of independent media platforms, sober analyses of possible outcomes of the war, none of which gives Russia any gains or advantages, are published by established think-tanks (Russian International Affairs Council, April 29). The proposition that Ukraine’s rapprochement with and membership in the EU answers Russia’s security interests is advanced in impactful editorials (Nezavisimaya gazeta, April 27).

The visible proliferation of such opinions indicates the rise of dissatisfaction with the course and consequences of the war in some segments of Putin’s elites, even if patriotic drums keep beating non-stop, and some pseudo-academic pundits deserve inclusion in the sanction lists on par with dirty propagandists (Moscow times, April 29).

The prospect of defeat

Putin insists that Russia was compelled to launch the “special operation” in order to counter the direct threat to its security coming from Ukraine, but this argument doesn’t begin to make sense from loud recycling.

The war is too obviously of his choice and making, but the deadlock in Donbass and the looming prospect of a defeat make an escalation a necessity for him.

Even sustaining the current configuration of hard-fought battlefields requires a major increase in feeding the war machine with material and human resources, which requires a mobilization. This step would signify one pattern of escalation, and the Kremlin has no way of knowing whether the Russian society would accept it.

The nuclear choice might appear easier to execute, providing the top brass goes along with it and the chain of command wouldn’t break in one weak link or another. Putin trusts neither his generals nor his oligarchs, and he needs to preempt a convergence of their mistrust in his rationality in making crucial choices.