Russia’s war on Ukraine has repercussions also in Northern Europe. Finland and Sweden, despite their longstanding policy of military non-alignment, are more than likely going to submit their applications for NATO membership before the summer. 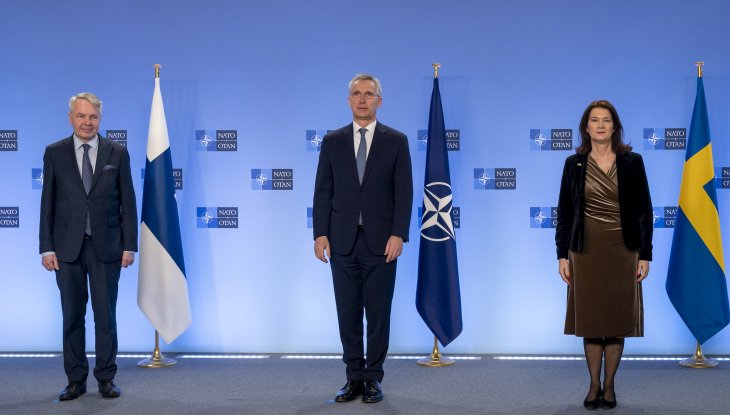 In light of Russia’s brutal and unprovoked war and both countries’ close existing partnership with NATO, this move does not surprise.

In fact, the sequence played out in the reverse. The Finnish public opinion changed dramatically almost overnight during the week the war broke out in late February.

For 30 years, the Finnish public opinion on the issue of NATO membership had been rather stable: in diverse but regular studies since the end of the Cold War, never more than 30 per cent and often even less than 20 per cent of Finns had favoured membership in NATO. In January 2022, 28 per cent of respondents supported the idea of Finland’s membership in NATO while the share of undecided had increased. In the poll carried out in February, the figure in support of joining NATO was 53 per cent, in March 62 per cent while in May it was already 76 per cent. At the same time, the share of opponents to NATO membership had sunk to less than 15 per cent.

As a consequence of this unequivocal shift in public opinion, the political leaders were bound to react. Still, in February, President Sauli Niinistö did not think that any fast decisions with regard to Finland’s NATO membership were in sight. However, when the public opinion became loud and clear and more and more politicians also started to argue for Finland’s membership in NATO, the President started what he called ‘a process’, without publicly revealing its ultimate goal. He visited Washington and met with President Joe Biden and he talked to NATO Secretary General Jens Stoltenberg and to the heads of other key NATO countries, as well as to Sweden’s Prime Minister Magdalena Andersson. In Finland, an informal and ad hoc core group of party leaders was formed to coordinate the domestic process.

A key part of the process was that the government prepared a report on the changes in Finland’s security environment, which was given to the parliament in April. The report implicitly but not directly recommended Finland’s membership in NATO. If the political reception seemed favourable, another much shorter report proposing a membership application would follow. In April, a majority of the Finnish MPs had already publicly announced that they would support Finland’s membership in NATO. Prime Minister Sanna Marin, along with leading Social Democrats, did not reveal her position yet, but everything indicated that it would be a surprise should the party not support NATO membership too.

In Sweden, Prime Minister Andersson stated first in March that Sweden’s bid for a NATO membership would destabilise the situation in the Baltic Sea area. She then contended that Sweden’s membership in NATO was not being excluded as a possibility, and soon thereafter, when meeting with Finland’s Prime Minister Marin in mid-April, she indicated that Sweden might indeed apply for it if Finland does so too. The Swedish government started to prepare its report for the parliament. However, the internal debate inside the Social Democratic party was seen as the key in Sweden’s decision-making process. Despite the fact that the party’s old guard had traditionally strongly favoured Sweden’s policy of military non-alignment, the country’s close connection to Finland had also been more important for the social democrats than for the other parties.

A plurality of the Swedish public opinion had supported Sweden’s membership in NATO in most polls already before the Ukraine war. When the war started, the opinion shift was not as drastic as in Finland. In March, 47 per cent of the Swedes supported the idea of NATO membership and 33 were opposed; however, if Finland were to join, a clear majority of Swedes responded that they would be in favour of joining NATO. In April, 53 per cent of the Swedes supported NATO membership. These figures mattered in Sweden also because the parliamentary elections would be held in September.

The importance of public opinion

This change in Finland and Sweden’s attitude towards NATO membership shows how much even security policy is driven by public opinion. Changing a policy that has not fundamentally failed is always difficult: the slogan ‘if it ain’t broke, don’t fix it’ guided Sweden and Finland’s policy towards NATO membership in the post–Cold War era. Given that the public opinion seemed relatively stable, the political leaders did not want to launch an uncertain process.

A cognitive shift in attitudes towards NATO membership needed an emotional push.

The resistance of the Finns to NATO membership had been wide but not deep. Yet, a cognitive shift in attitudes towards NATO membership needed an emotional push. Russia’s wars in 2008 and 2014 had only caused a slight change in the public opinion. 2022 was different. Russia’s war on Ukraine was unprovoked and large-scale: in Finland, the 1939 Winter War analogy was immanent and became much more strongly felt than in 2008 or 2014. In a comparative survey, Finland and Sweden were the countries where the largest share of citizens in Europe believed that Russia, rather than Ukraine or NATO, was responsible for the war. Perhaps the long pandemic had also increased the sense of anxiety and uncertainty in the society.

Moreover, in the runup to the war, Russia had demanded that NATO put a stop to its open door policy not only with regard to Ukraine but also with regard to Finland and Sweden. This was the moment when the president of Finland realised that the earlier policy of just keeping an option of joining NATO would not work. The option was always seen as a strategic barometer: if Russia would not question Finland’s right to join NATO in principle, there would be no concrete need to join NATO. The option to join NATO was seen as a kind of deterrent that now had failed. For many people, applying for NATO membership was a demonstrative statement against Putin’s attempt to define new spheres of influence.

Putin’s war on Ukraine led to the opinion change towards NATO membership in Finland and Sweden. This is the easy explanation, but we should qualify that in terms of counterfactuals. Had Putin not demanded that NATO close its open door policy also with regard to Finland and Sweden, and had Russia just started a ‘special operation’ instead of a destructive full-scale war, the dramatic change in the public opinion and thus also the change in opinion among political leaders would have been unlikely.